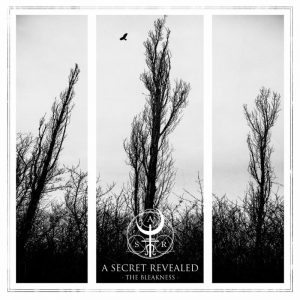 Released on April 24, 2015 via Bastardized Recordings

It’s safe to say that A Secret Revealed are not the happiest bunch o’ lads. The album title was the first clue that led me to this conclusion. After then there’s…well, everything else. The German 5 piece willingly use any and all tools to convey their displeasure with life, genre be damned. Post-rock atmospherics, hardcore confessional vocals, bursts of feral black metal, metalcore breakdowns – it’s all fair game, so long as it contributes to the oppressive atmosphere of hopelessness and despair.

The fact they manage to make it all gel so well is an impressive feat. There are no jarring developments in the songs – they all unfold in an oddly elegant fashion for a record so intense. Opener ‘When Grief Disappears’ has an elegiac guitar line woven throughout its lurches between styles with Pete Motz’s impassioned, blood-vessel worrying vocals up front and centre. Singing entirely in English he’s the kind of vocalist that wants to grab you by the lapels and scream directly into your face. Which works counter to the atmospherics – at various points this could easily be an immersive post-metal record with a different vocalist, something to sink into and be consumed by. But the urgency in his voice keeps your mind from drifting off. “The world will never hear your voice,” he screams at one point. In his case it won’t be for the want of trying.

The song and video for ‘Avoid the Light’ act as a microcosm of the album at large. In a black and white field it starts with a neat finger tapped riff intro before the ever present screamo vocals barge in like a particularly jittery bull in a tiny china shop. Then begins some double kick drumming that gets more and more insistent, eventually evolving into full on black metal blast beats. It’s like they’re dead set on constantly turning the screw, getting more and more intense. Eventually there’s nowhere left for it to go but end.

Which works fine over 5 minutes, but in continually trying to find that next level over the course of 10 tracks they end up plateauing and hammering away relentlessly at the same pace and volume. There are exceptions – Below the mountain is entirely forgettable but necessary instrumental breather – and they make some shifts in genre like the proper black metal shrieking and mournful middle 8 on ‘Drowning’. But for the most part it’s a ceaseless, draining cavalcade of misery and disappointment in the key of Heavy.

Final track ‘The Longest Day’ lulls you into thinking they’ve finally moved onto a well-earned comedown track for 2 minutes before bursting back into life. It then becomes something almost triumphant, despite the screams of “There is no hope/There is no reason.” The guitars swoon in a post-rock crescendo before abruptly ending. It’s like this realisation is the catharsis the record needs, having drilled down to the very nadir of the soul, to allow them to call a halt to proceedings.

“This is not the life I was supposed to live” Motz screams on ‘To Have a Dream is to be Cursed’. The root of his woes are laid bare in that lyric. There’s a vein of black pulsing sorrow that runs through every cell of The Bleakness. An odd patchwork of influences and subgenres seamlessly woven into one disquieting whole, it’s not a record you’d listen to lightly. Pressing play is like making a pact with the band: neither of you are going to quite be the same by its end. In short bursts it’s devastating, but it is also a little too one note and short on dynamics to keep your interest for the full album. But then again you get the feeling they like it that way – you don’t call a record The Bleakness then go about making the listener feel comfortable. And ultimately amidst the sorrow and the pain there’s something cathartic and even redemptive in those atmospheric guitars and throat rending screams. This is charred and mauled music trying to claw its way out of the darkness and into the light. And it’s almost tempting to hope they don’t make it – this is only their début album after all and whilst it’s not without its flaws they’re sounding pretty promising down there in the murky depths of the abyss.