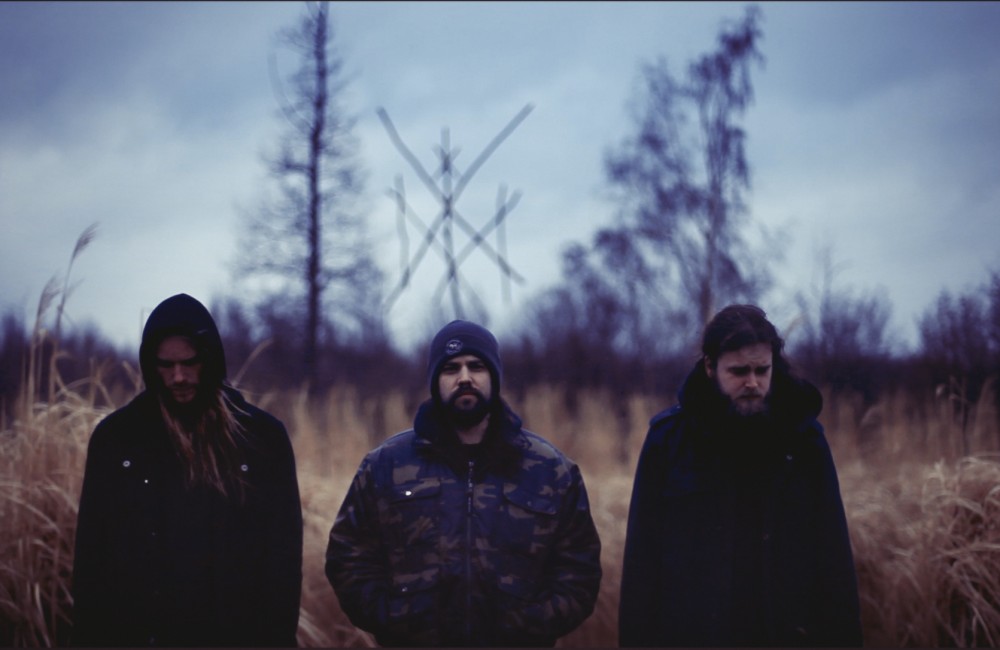 The Belgium trio Wiegedood has just released their epic debut album De Doden Hebben Het Goed through ConSouling Sounds, which is one of the more ferocious atmospheric black metal releases of this year. The band comprised of Rise And Fall’s Wim on drums, Oathbreaker’s Gilles Demolder on guitar, and Amenra and Hessian’s Levy Seynaeve on guitar and vocals have been taking the metal world by storm getting a lot of positive reviews. Matt Butler asked Levy some questions to find out more about Wiegedood and the Church of Ra scene.

(((o))): Your debut release De Doden Hebben Het Goed is a very nice album. What’s the reception been like?

Levy: Better than we could have ever imagined. Pre-orders have been going really fast and the first reviews are very praising so we couldn’t have wished for a better start.

(((o))): What’s the most surprising thing that a fan or critic has said about the album?

Levy: No surprising comments this far actually, which I find very positive. The reviews and reactions I’ve heard so far are spot on what we wanted to achieve. So I’m glad people get what we’re trying to do.

(((o))): I didn’t understand the lyrics, but the song titles are really, really bleak. What makes you want to write about such dark topics?

Levy: Life and how I perceived it to be at the time we wrote the songs. And although it isn’t a very positive take on life, it helped me get perception on a lot of things going on at that moment. The record is a testament of how I stand in life I guess.

(((o))): Even though the songs have bleak titles, the music itself is comforting and almost warm in places. Was this your intention or is it just my ears?

Levy: Although despair and hope are two opposites I think at the same time they go hand in hand. I think it’s a human reflex to go looking for hope when pushed into a corner.

(((o))): You’re all in other bands, how understanding do the members of your “main” bands have to be, when practising, playing gigs etc?
Levy: We all have to set priorities of course. To me that priority is Amenra, to Gilles it’s Oathbreaker. We really try to stick to that and try to build everything around it. I think we’ve gotten pretty good at that and we’ve developed a good system where we fill in for each other’s bands when necessary. It happens sometimes we have to decline shows due to obligations with other projects but we manage to keep that to a minimum.

Levy: We have a pretty busy touring schedule lined up, which will be announced pretty soon so we have a busy year ahead of us. The writing process for De Doden Hebben Het Goed went really smoothly however and although it’s always easier writing songs if you have no earlier releases to keep in account, I don’t think it’ll take us years to come up with new material.

Levy: We started rehearsing as a three piece and it became clear to us pretty fast that it didn’t make sense to add a bass guitar to that equation. We actually didn’t use any recordings tricks to make it sounds extra full. We recorded what we play live and that was it. That’s what sounded most natural to us so it’s not like we went looking for a particular “full” sound. I think that’s what makes the record what it is. The fact that we didn’t overthink anything or force an unnatural produced sound to the songs.

Levy: Amenra has always worked with a lot of different artists, both in music and other forms of art. Bands like Oathbreaker where Lennart from Amenra plays guitar and Gilles from Wiegedood plays bass. Ambient projects like Treha Sektori with whom Colin [H van Eeckhout] and Mathieu [Vandekerckhove] later on formed Sembler Deah. Right up to photographers like Stefaan Temmerman who has been a part of our touring crew for as long as I can remember and who released an amazing book about Amenra documenting our every move over the last years. These are just a few of the people Amenra connected with over the years. Church of Ra is the name that was given to that idea of togetherness.

(((o))): What are you listening to at the moment? What album in your collection would we least expect to find?

Levy: Amenra played Doom Over Leipzig recently where I got to witness SubRosa. Their record More Constant Than The Gods hasn’t left my record player ever since.

I’ve always been very fond of singer songwriter stuff like Townes Van Zandt. I don’t know if that qualifies as something unexpected but there you go.

(((o))): Thanks for taking the time to answer, and thanks again for making a great album.