When you’re scheduled to interview a band on the first day of a festival, particularly when the festival is in a mobile dead-zone, every traffic jam, every roadwork, every red light feels like a harbinger of doom. Thankfully, we arrived at ArcTanGent in good time, got everything set up, and had two bands and at least that many ciders under our belt by the time we were due to interview 65daysofstatic. Unfortunately, they had not been so lucky. Arriving late on site, we later discovered that was the least of their issues – they also had problems with missing laptops which, for a band like 65daysofstatic, is tantamount to arriving without your guitar. Tired, but friendly and enthusiastic, they shored themselves up with tea and sat down for a chat with us.

65daysofstatic headlined the first ArcTanGent festival in 2013. “The first time we played Wild Light”, recalls Joe. “Yeah, it was amazing but pretty scary,” adds Paul. “Normally we test out new material in a more intimate setting. But it turned out alright, I think”. We both nod enthusastically. 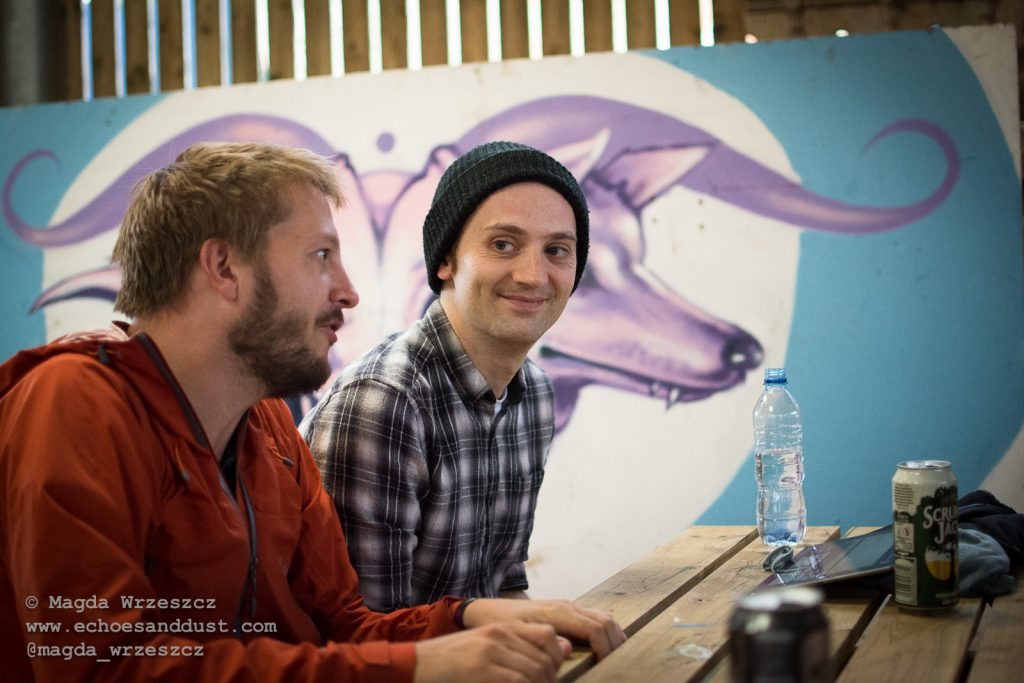 65daysofstatic also played Glastonbury Festival in 2013, appearing in the William’s Green tent. I ask how their preparation for festivals differs to their preparation for gigs, if at all. “We’re in a bit of a strange part of the cycle at the moment,” begins Paul, “ArcTanGent isn’t how we’d normally approach a festival – most of the people here will know who we are. Normally, you’re playing to strangers and you have to almost approach it like a fight – you have to win these people over who have never heard of you. But they are at a festival so you figure they’re probably open minded to give it a go.” He concludes “I think we approach ArcTanGent more like a 65daysofstatic show rather than as a festival”.

So you approached your Glastonbury set differently? “We were really incredibly excited to be at Glastonbury,” Joe says, “having not particularly been expecting to be booked there. And we knew we had a limited amount of time – I think we got 6 songs – so that was more of a standard 65daysofstatic ‘shock and awe’ situation. What I remember about that show is the atmosphere was fantastic – that was palpable. But you can’t ever go on stage expecting that to be the case. When we played the first ArcTanGent I felt really nervous; I almost prefer playing the unknown shows, in that sense; there are going to be a lot of people in the crowd tonight who really like us, and a lot of people who have really strong opinions of us, and the weight of expectation is quite heavy.” 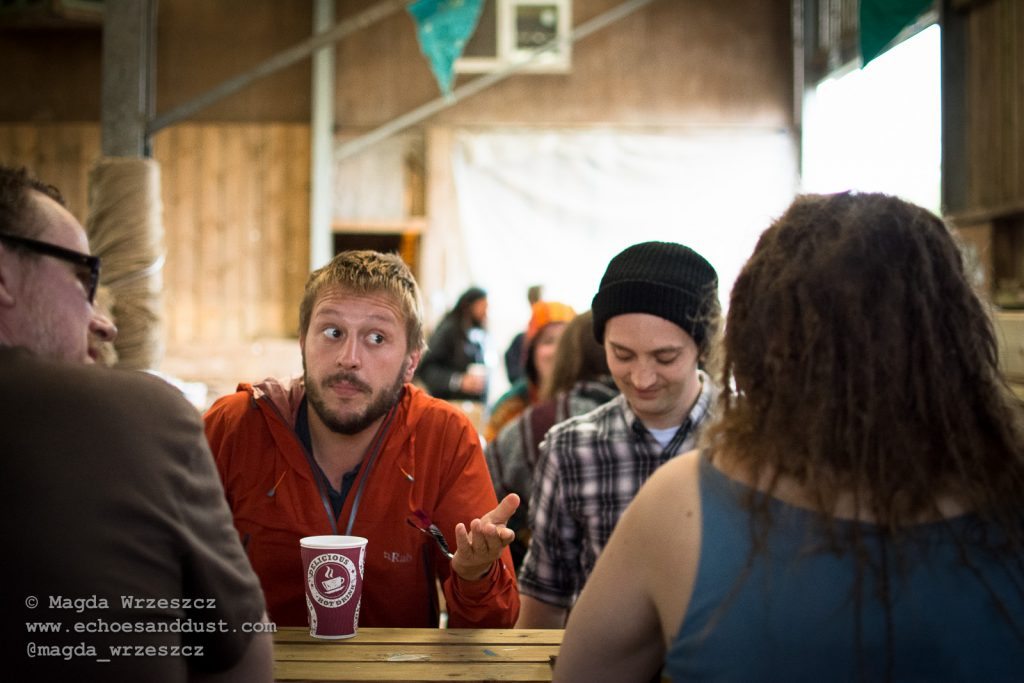 We talk about the fact that a festival like ArcTanGent now exists; something that no-one really would have imagined when 65daysofstatic first started out. During the conversation I use the term “post-rock” as a descriptor of the music, and it emerges that neither of them really feel any particular affinity with the term. Paul goes first; “I mean yes, we’re an instrumental band, and at the start it’s true that we played a lot with dynamics and the angular stop/start thing, but from the very beginning we always tried to find our own sound and not for that to be like anyone else; because if you try and emulate your heroes, you’re never going to be as good as them. And that’s always been our ethos. It’s a difficult one, because it’s impossible for us to know what 65daysofstatic sound like outside our own ears. But we’ve always tried to do our own thing. So the festival that would exist with that in mind, with “our type” of music, would be one where all the bands sound completely different.

“I’d not heard the phrase post-rock for years until I came here, and suddenly everyone’s talking about it.” Joe continues. “Do you not find that really strange? Until you turn up to these kind of niche events, no-one’s really concerned with this at all, but then you get here and suddenly it’s all about whether we are or are not a post-rock band, and there’s a real anxiety about it. There’s a sort of genre-defining cliquism – which may well be my own perception.”

Paul carries on; “There’s a balancing act for a new band or a new festival. A community of like-minded people with the same taste is absolutely wonderful, and it’s great to share that. But then is there an innate need for a community to identify with a ‘thing’ in order to make them seem more real? It feels like “post-rock” is that thing. Blank Mass are playing this weekend, and there are a whole other bunch of electronic acts. And surely whatever post-rock could possibly mean, even in its broadest sense, surely that’s not Blank Mass.”

“I don’t really know what is meant by ‘post-rock’ – I think it’s an incredibly constraining set of attitudes and I almost think it’s a distraction from other conversations that music could be having, that it isn’t having.” 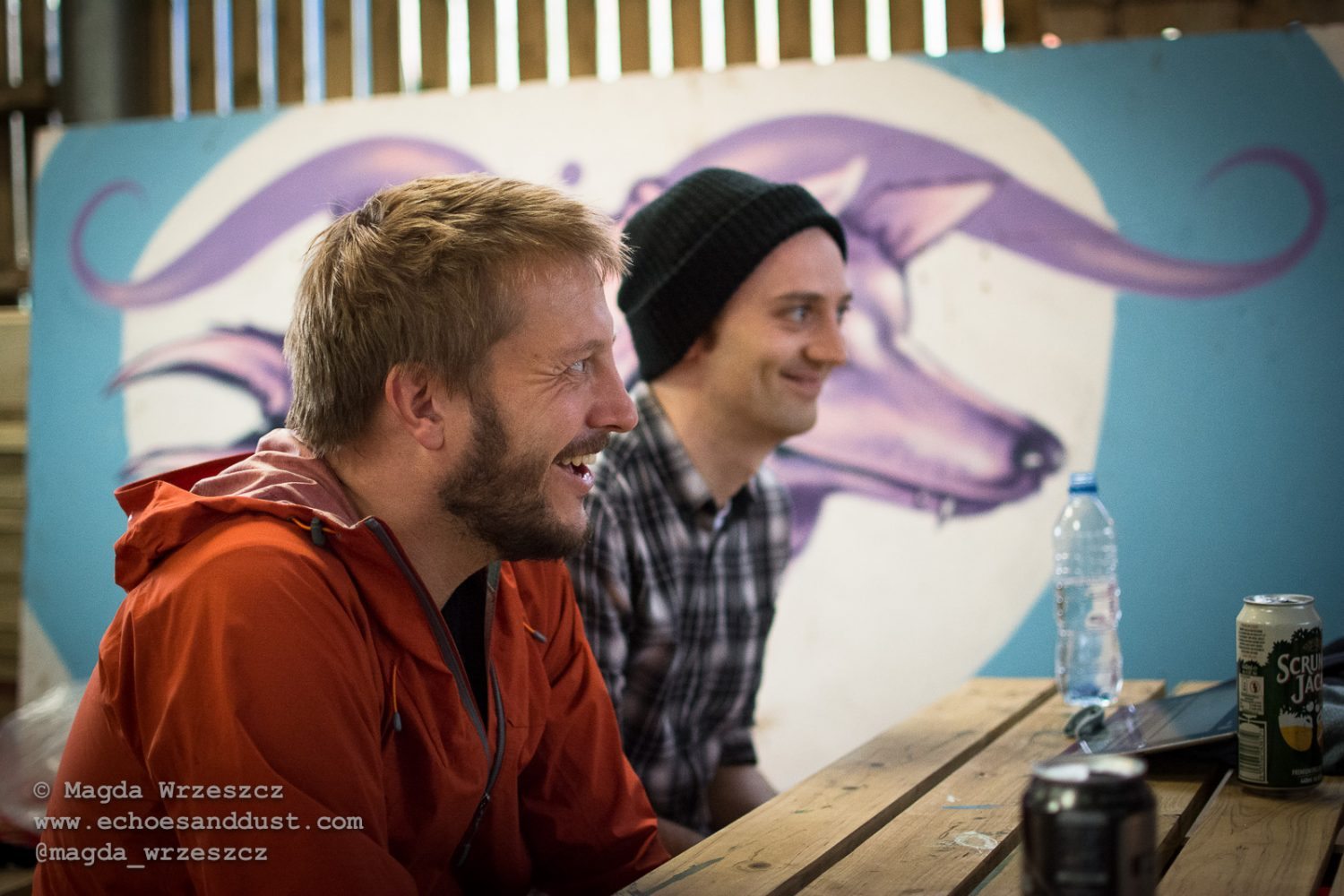 “Labels are helpful, though”, I protest. “I mean, at the end of the day we’re journalists and we’re interviewing you for our website, and we want people to be able to find that interview and read that interview. And people like labels. I don’t like labels, personally, but people like labels.” Paul is quick to pull me up on the ridiculousness of that statement, and argues against the need for an all-encompassing word for the type of music ArcTanGent puts on (something we have been trying, and failing, to find for the past 3 years).

“The umbrella you’re putting them all under; all these bands and this community – is this festival. It’s this actual space. It doesn’t need to be described as this music or that music. It’s just music and like-minded community of people. The music industry is crumbling and there is a really crucial role for music journalism in culture, and that ongoing conversation between musicians and critics that helps everyone understand what’s going on. But no-one’s worked out how to deal with the internet yet in any form, and with music now, the need for these labels could be eradicated. There’s soundcloud, mixcloud, youtube, bandcamp. A review of ArcTanGent could just be links to YouTube videos and no words at all, and in some ways that would give people a better idea of what’s going on.”

‘Writing about music is like dancing about architecture’, I say. That’s the quote, isn’t it? “Yes,” says Paul, “that’s the quote but why couldn’t dancing about architecture be a really fun and interesting thing in and of itself? The one doesn’t have to be dependent on the other.” The conversation has moved from being an interview to being somewhere between a conversation about interviews and a seminar on music journalism in the internet age, and it is fascinating. I want to just sit and talk to them for hours, and I realise that Paul is right – what links these people in this field isn’t their shared taste in music, it’s their shared curiosity. Everyone here wants to know more, wants to hear more, wants to do more and be more and feel more. In the digital age, almost anyone can be a blogger or a photographer or a musician or a promoter, and while some people mock that and bemoan the death of “real” journalism or “real” music, the rest of us are coming together in a glorious celebration of mutual incurable curiousity. 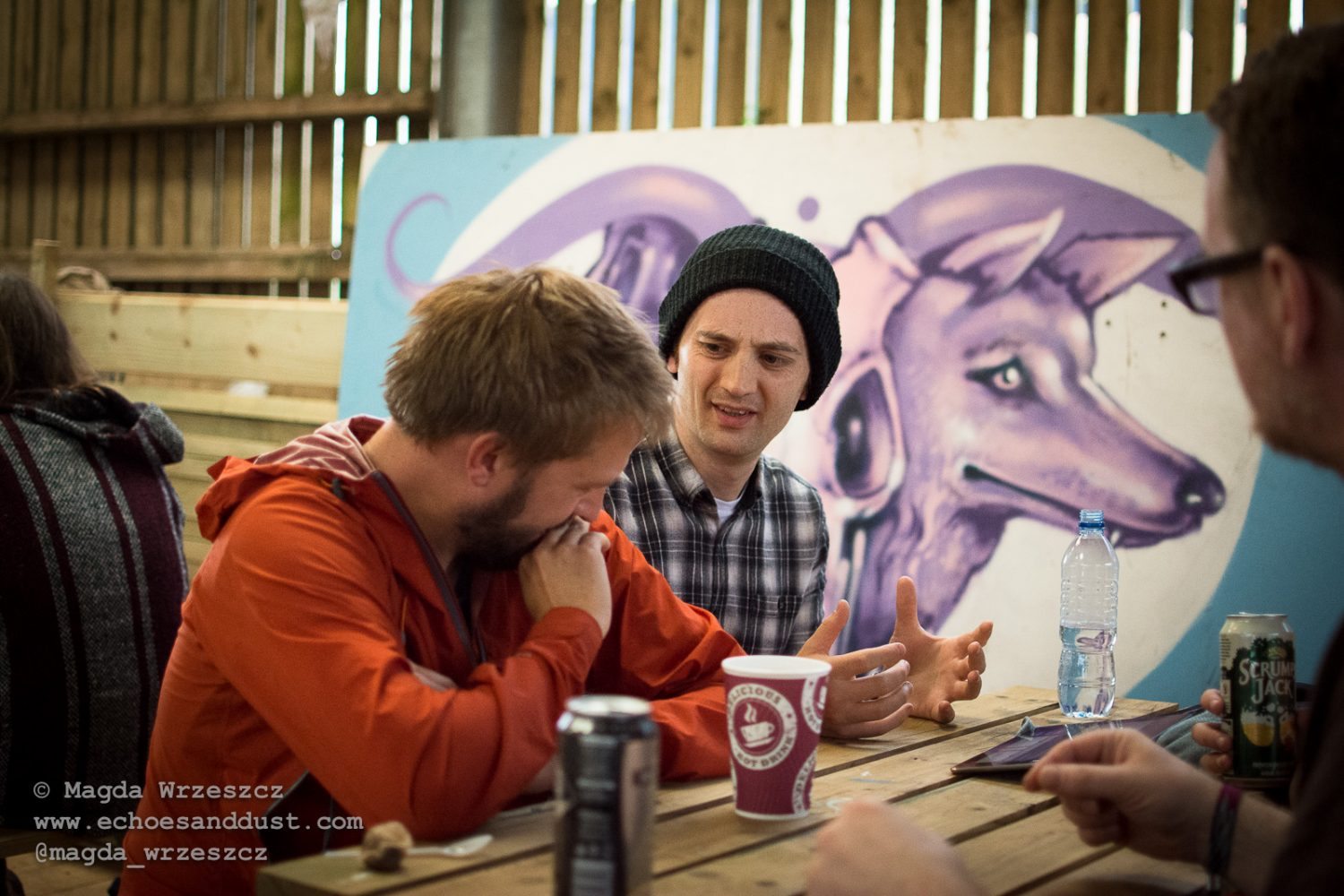 Sadly, we cannot talk for hours; we are on the clock and 65days have other interviews to do and, of course, a set to perform later that evening. With time for one more question, I ask about the politics of the band; never ones to shy away from expressing their opinions, the band recently posted an excoriating piece about the way in which the government were reporting their recent arts funding. But is it harder to express yourselves politically as an instrumental band?

“We have no real frame of reference other than being 65days,” Paul begins. “I have no idea what it would be like to be a gifted lyricist and be able to put all of that into words. A lot of things that call themselves ‘protest music’ are still folky and guitar-driven in a Billy Bragg kind of way. And there’s nothing wrong with that at all, but it’s less about the music and more about the lyrics. Whereas there’s plenty of stuff we want to say which we don’t really have the words to say, and making loads of noise is our way of doing that. It’s all politics. Everything is politics. We feel a lot more able to express ourselves than if we weren’t in a band.”

Joe continues, “There was no reason for us to publish that article about the funding that we received other than to force some political conversation to actually happen. It’s much simpler to just accept something like that, and we were genuinely very very happy to get the funding. The point was the hijacking of that funding by a political party. So it’s something we published to highlight what was going on, but it’s certainly not the forefront of what’s happening out there right now. Everything is being cut – front line services, institutions. And arts funding is very, very important, but it’s probably not the most important one. So you have to find ways to force debate; it’s much easier not to, but someone needs to start the conversation. And all of the rebukes to that article, all of the disagreements, seemed to miss the point of what we were saying. If you actually sit down and think about the destruction, it’s fairly inhuman, it’s fairly indecent. And it takes a lot, well, it takes a Tory really, to argue for them. You have to be quite cold-blooded to think that any of that stuff is good.”

Later that evening an obviously fired up 65daysofstatic smash their way through a blistering set, making a mockery of any technical issues they may have had, and Joe exhorts us to “cut out George Osborne’s eyes and eat them like a Solero”. Who says instrumental music can’t be political? 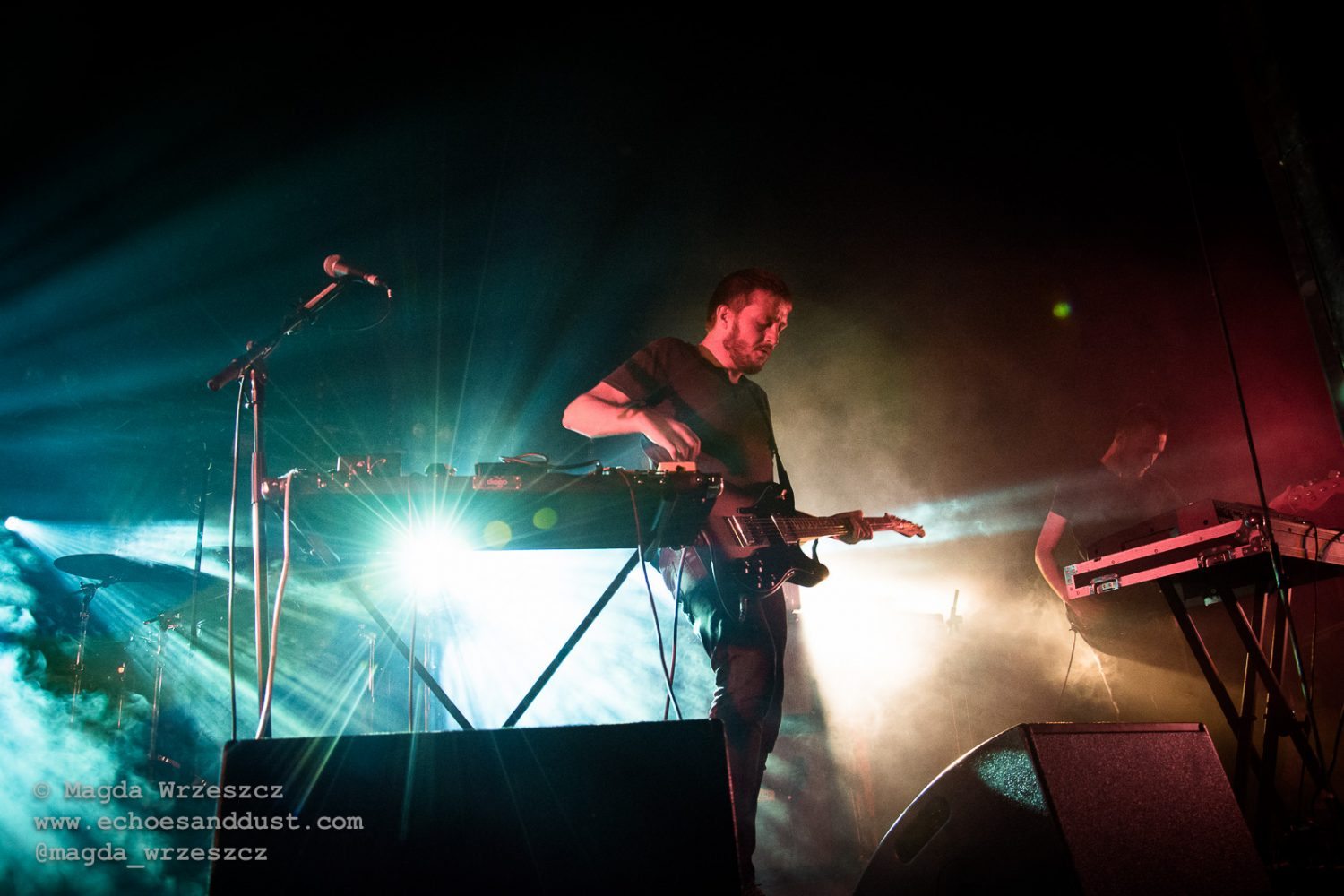