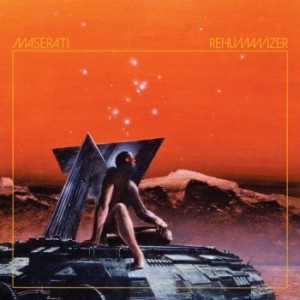 If you are in the mood for a rad space rock without renouncing to heavy drumbeats, Maserati offer exactly what you are looking for. Hailing from Athens, Georgia, the quartet is back with a brilliant album where space rock and Maserati go hand in hand and that will keep you on the move from beginning to end. Released three years after their Maserati VII, the synthy and spacey Rehumanizer exceeds every expectation. Weighing in at about 35 minutes long, the new album has all kinds of wonderful guitar tones flying around and encapsulates the feeling of a road trip. The moment ‘No Cave’ kicks in with its electronic arrangements it’s easy to feel that you’re ready for the sonic ride. The retro and unprocessed vocals in ‘Living Cell’ are utterly amazing and the whole song proves the band’s experimentation that, despite the risks involved, led the band to deliver an album that for sure it’s their most eclectic one and perhaps their best work up to date. The flow of the album is strategic: from the pursuing rhythm of the first two songs that makes you feel like your floating away to magical places, ‘Living Cell’ quietly dissolves into the minimal ‘Montes Jura’ through which the band deliver a dense synth work with motorik drum patterns. The following ‘End of Man’ is a song built with keyboards and bass and shows the band’s ability to deliver pure electronica in the most natural way they have ever produced.  ‘End of Man’ clearly shows the diversity of the new album from the previous works sounding innovative but at the same time reminding known sounds and the whole collection of movements that form Rehumanizer is like a bridge between the past and the future. The album ends with the title track divided in two parts. The use of space and the predilection that Maserati has for taking the sound in a cosmic-minded direction with pursuing rhythm is evident in ‘Rehumanizer part I & part II’ where the band reaches their most impressive work. In about thirteen minutes, the undisputed protagonist is the perfectly executed blend of the guitars of Coley Dennis and Matt Cherry, the drums of Mike Albanese, the synthesizer and the bass of  Chris McNeal showing that the Maserati new formula of embracing technology as a songwriting tool is an experiment that simply works. Rehumanizer is out via the label Temporary Residence and it’s available in LP/CD format (order  here)