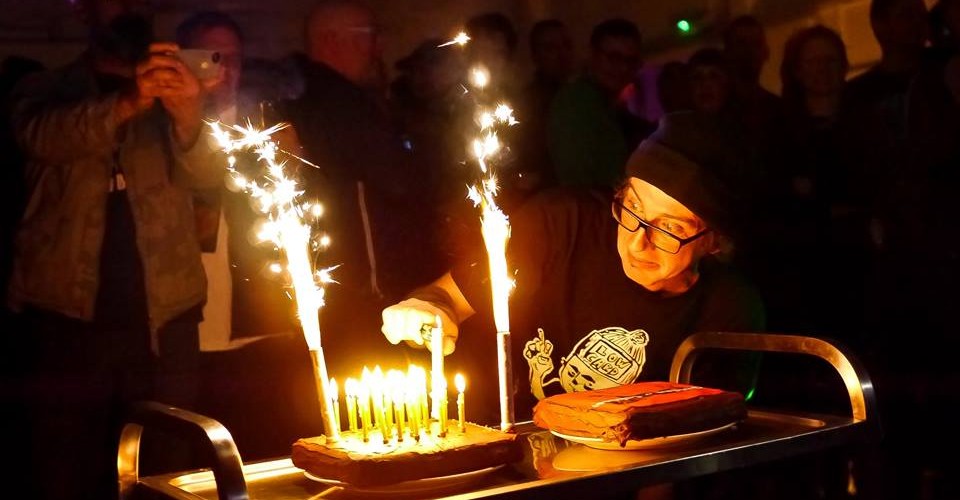 Golden Cabinet put on gigs in Shipley, the line ups always make our jaw hit the fucking floor. It’s pure DIY powered by a love of music and we think their operation is simply wonderful. Rich had a chat with them to find out a bit more.

CC: Hi Golden Cabinet, how are you?

CC: You put on gigs in like a community centre, do the locals look at the posters and go ‘WHAT THE FUCK IS THAT?’

GC: I don’t know about that but I think the locals who come to our gigs are open minded folk in general. We did get a few pleasantly bewildered people after Oake, who’d never seen anything like it but were blown away. That kind of thing makes us really happy.

For our community centre (its called the Kirkgate Centre) Golden Cabinet has become a bizarre ‘success story’ – financially our nights support other activities and groups that operate out of the centre which have absolutely nothing to do with weird electronic or noise music, and secondly, through the acts we’ve put on it’s meant that The Kirkgate Centre has become a destination for all manner of weird and wonderful people from all over the UK & the world.

But having said that – I’ve met a number of people recently who all live locally that were like ‘WHAT THE FUCK, SHIPLEY? IS THIS FOR REAL?’ – so even though we’ve been banging away at this for two years now there’s still plenty of minds out there that we haven’t ruined yet!

CC: The music fans around there must think you guys are legends for bringing them some of the best bands in the world right?

I think they appreciate having great stuff on their doorstep, makes a nice change not having to travel to a big city to see the kind of stuff we put on. It kind of proves that it is possible to create something completely new in a small place rather having to rely on the bigger cities to provide a music ‘scene’ as such. When Golden Cabinet started we had no idea whatsoever how it would fare nor the overwhelming positive support and feedback that we’ve attained from essentially just putting on regular gigs.

We have a whole bunch of regulars that come each time – and what’s amazing is when someone comes for one band and doesn’t know anything about any of the other bands, then gets completely blown away by one of the others (or the whole night). Case in point – loads of techno heads turned out for Perc and got completely blown away by Sly & The Family Drone and conversely the headbangers turned up for Hey Colossus and ended up getting their brains fried by Karen Gwyer. Also, we have a sneaking suspicion when Oake played a number of people were expecting ‘banging techno’ – but what they actually got was something more akin to a ritual (in a community centre, of all places).

CC: I’ve been through Shipley in a car, it’s in the middle of nowhere. I’d imagine it’s tough putting on gigs there, is that the case or is it a bit easier because there’s not much else going on?

GC: I suppose it can seem like that but actually it’s only 20 minutes on a train to Leeds and 10 minutes into Bradford so it’s not that remote and our venue is only a couple of minutes walk to the train station. People in London must make those kind journeys, and longer to gigs, all the time without thinking about it. It’s been good for us publicity wise, we’ve had some really nice things written about us, people seem to like that we’ve stuck our necks out and it works (most of the time!).

GC: There’s been loads but off the top of our heads:

GC: That would have to be Supernormal. The best people, best bands, best ‘vibe’ & best location.

Thanks to Rich + Echoes & Dust for giving us the chance to waffle on on your lovely website, and thanks to everyone who comes down and makes our nights the fun that they are.