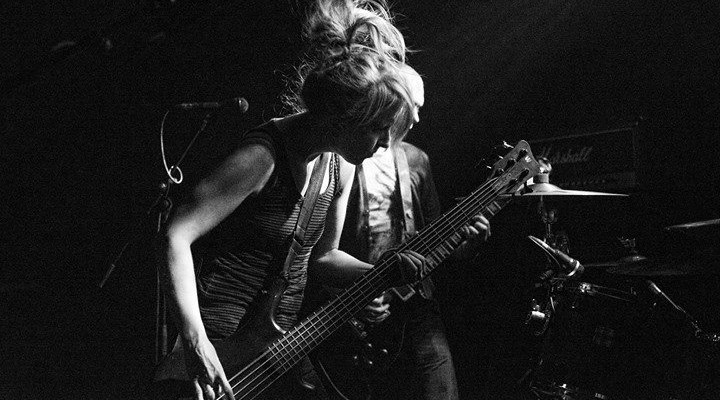 Torpor kinda sound like a speeded up, more pissed off Godflesh. We love them, how can you not love something so brutal? They’ve just dropped from a four piece and to a three piece and played the biggest gig of their life supporting Amenra in London so Rich had a chat with bassist/vocalist Lauren to find out what the fuck is going on.

CC: Hi Lauren, how are you?

LM: Hey Rich! Really good thanks, it’s my birthday and I’m spending it recording all weekend so it doesn’t get better than that!

CC: ‘From Nothing Comes Everything’ was fucking ferocious, you pleased with it?

LM: Aww, thank you! Yeah, we’re really proud of it. At least half the ferocity credit must go to Wayne Adams at Bear Bites Horse…I’m pretty sure it wouldn’t have sounded like that if we’d recorded it anywhere else. I can imagine a lot of other engineers cleaning us up a bit too much. The more squealing feedback the better with Wayne, we’re on the same page.

CC: You’ve recently had a line up change, how has this affected the band’s sound?

LM: We’d been writing without Nats for the best part of this year anyway so our sound was already changing by the time she left – she was never comfortable with the very heavy, very doomy vibes so it’s a relief that we don’t have to compromise any more on that! Writing these songs we just totally indulged ourselves, because we’re allowed to play the same dead note riff for 10 minutes now if we want to, sing badly, make a shit load of painful noise or whatever we want…haha. As I write, we’re recording our side of a split 12″ with Sonance that’s coming out next spring, with Wayne again. Apparently it sounds like “treacle with glass in it” and makes our album sound like a demo in comparison… It definitely sounds different – much darker, much heavier, uncomfortably opressive in places, and uncomfortably naked in others.

CC: You just toured Europe? How was it?

LM: It was loads of fun! We went out with our friends in Human Future, who were awesome tour buddies. They’re enthusiastic young guys who don’t have dodgy backs or grumpy dispositions who drove our backline around in their van while we turned up late for most of the shows after driving like my grandad in our little car and getting lost! “Hi guys, sorry we’re late! Thanks for setting up the gear!!” Haha. It was a real pleasure to watch them every night, they’re doing interesting things, one of the few hardcore type bands we really like. We met some lovely people and can’t wait to go back!

CC: You also played with Amenra at Heaven, how did it go?

LM: It was incredible! I’d convinced myself it wasn’t going to happen – it took months and months for their agent to approve the support bands, then Nats left and I just thought we’d be too much of a risk. But the promoter James of Fire and Air was really supportive and had complete faith, it didn’t make a difference for him so we just thought fuck it, let’s get our new set ready and go for it!

LM: That would have to be the Amenra show! Close second would be Desertfest, that was awesome as well. We were the first band of the festival, so we set up to an empty room and ducked behind the stage for a few minutes to get our shit together, then went back on to a totally packed room with people apparently queuing up the stairs!

LM: I can barely remember!! The Heads at the Lexington was awesome wasn’t it! And the Primitive Man gig at the Unicorn back in March where we supported. That was the heaviest thing I think I’ve ever experienced, Jon and Simon had to go outside for air it was so oppressive! I love that band.

LM: Sumac – The Deal. Jon got me on to that one, it’s fantastic. The Dead Existence album Endless Misery is bloody great, they really went out with a banger. I’m really enjoying the new Bismuth album this week, it’s perfectly bleak and harrowing, Tanya is awesome. The Human Future debut, Spectrum is brilliant – the most interesting hardcore record I’ve heard for a while, I think down to Steven’s use of electronics and the conceptual approach he takes to writing.

LM: I had loads of fun at Temples this year, the lineup was great and it’s a lovely venue. Plus I had your drunken commentary over quite a bit of it, which was nice. Haha.