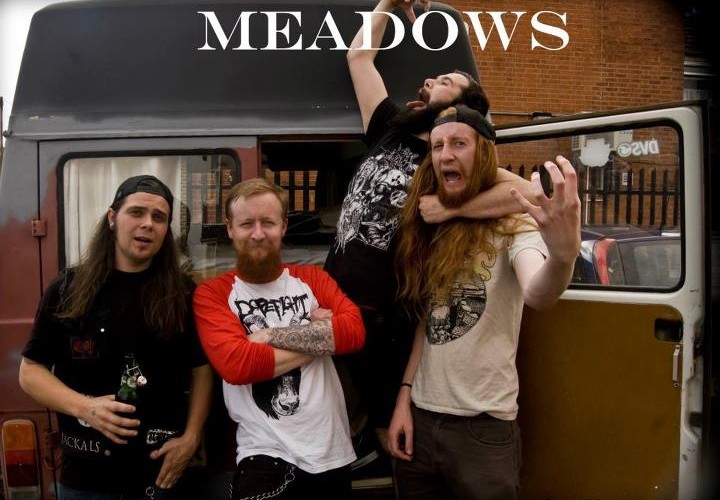 By: Richard Collins Photo By: GMPhotography

Chris is another one of those multi project pioneers. He’s in three bands all together – Meadows, Jotnarr and Mother Sky and if that’s not enough he puts on a majority of the great gigs in Colchester under the guise Shallow Leisure. Chris played the first two Cosmic Carnage gigs and is a total legend, here’s what he had to say about some stuff.

CM: Very well thanks, mate. I’d ask how you are, but we probably don’t have time to get into that, do we?

CC: When I first heard Jotnarr, you just had one recording which was captured by plugging all of your stuff into a tape player. A few weeks ago, you got Radio 1 airplay. Tell us about the Jotnarr journey…

CM: I think we’ve been going for about three years now. I’m not sure how long it took us exactly to get around to recording that demo but it was pretty early on. I think we just assumed we’d eventually put that out ourselves but we played a gig in London soon after and Sam from Isolation Tank saw us, seemed to like it, and offered to put something out on his label (Vetala) after that gig – so we said “brilliant! yes please, mate”. Sam has handled or helped with every release so far which means he’s a big part of us going from completely unknown Colchester band to the household name (as heard on the Radio 1 Rock Show) that we are now.

We’ve been very lucky that people are into our band enough to offer us cool shows, to help us with our releases, and come and see us. This is still a hobby for us, and we get in a practice room pretty much every week because we get such a buzz out of playing – I’m sure we’d do that bit even if everyone else thought we were total rubbish, but fortunately we get to do that proper being a band stuff and play gigs and release records.

CC: Meadows have been around for ages, when are you giving us a full length?

CM: We just won’t go away, will we. God knows, I mean, I’d like to say next year. We have the bulk of it written but we’ve been terrible at getting practices in regularly. Jack and I have other bands that take up time, and I work in arts venues pretty much every night of the week at the moment so that doesn’t help. We’re all still bang into doing the band, we just need to knuckle down and get the writing finished and book some recording time.

CC: I describe Colchester as the ‘Seattle of England’, how does one small town have so many great bands?

CM: I think its basically down to me. They all see how fucking great my bands are and they strive to be better as a result. Without me, Colchester’s bands would be pretty unremarkable. I’ve no idea though really, we are blessed with an unusual amount of talented and creative people who all happen to be totally lovely too. I think Colchester’s little scene is fucking great.

CC: You put on some cracking gigs there, are they well attended?

CM: Thanks! It varies, but on the whole they’re well attended, yeah. There’s been a bit of a lull since the end of the summer, but I think that’s the same everywhere. I also kind of exhausted the reserve of local band performances by putting on a sort of all-dayer as part of the free fest which meant I’ve had to be careful about over-doing it with bands playing shows too close together for the rest of the year. The last show I did was Atomck, Cassus, Lebrique, Unyielding Love, and Knifedoutofexistence. I thought’d it be the poorest attended show ’cause it was the most abrasive line-up I’d put together in a long time, but I was pleasantly surprised by how many people came. First couple of shows next year are Svalbard and Undersmile so I think those’ll be pretty packed.

CC: Colchester is fairly near London, does that make it easier or harder to convince bands to play there?

CM: That’s a good question… I think a lot of people haven’t heard of Colchester so that’s probably more of an issue than its closeness to London when it comes to convincing bands they should bother with a show here. It’s getting more and more of a name as a place to play a gig though – I know you’ve sent some bands looking for gigs my way. The more stuff going on, the more bands will want to play here – and I think that’s exactly what’s happening at the moment; the scene is thriving and getting better all the time. If I was a band from somewhere else, and I was looking for a gig in this general area of the country, I’d much rather play Colchester than London just ’cause going into London is a fucking nightmare.

CM: I’d have to say the Shallow Leisure free fest takeover thing. We did five bands on an outside stage in the afternoon, then five more at The Waiting Room in the evening. Three Thrones, Chestburster, Old Man Lizard, Jotnarr, Earthmass, Rad Pitt, Telepathy, The Domestics, The Atrocity Exhibit, and Ghold. I was well pleased with that line-up, and it was awesome to bring all those bands together.

CM: Ah that’s a fucking tough one, man. I’m gonna say it’s a tie between a house show in Brighton and the CMAR warm-up show in Munster. The house show was the second date of the little Jotnarr/Sky:Lark tour, and for the pure fun and the absurd volume we played at, it was the best one. But the CMAR warm-up show was amazing because it was such a decent crowd for us, the venue was ace, there’s a vegan barbecue, great beer, lovely people, and we got to play with Cloud Rat and June Paik who are both just fucking amazing.

CM: I don’t go to gigs I don’t play/organise.

No, I do really. errrrm… I saw Melvins and Big Business in Camden recently – that was great. Pissed Jeans in London a little before that too, they were loads of fun. Even more recently though I saw The Magic Band again at Colchester Arts Centre, and I actually got all tingly so I’ll say that was the best gig I attended in 2015. I have to say that I saw Godseed with the rest of Jotnarr in May. Poor Simon was driving, but Oli and I got drunk as fuck, and that was one of the best sets I saw all year. Also, I asked for vodka redbulls and I got given sambucca redbulls instead – yeah, there’s a reason people don’t order that.

CM: I’m not brilliant at keeping up with current releases, so I don’t think any of these will be new, but…
– Iron Maiden | Somewhere In Time
– Mercyful Fate | Don’t Break The Oath
– Baton Rouge | Totem
– Magic Circle | self titled 12″
– Cloud Rat | Moksha
– Pine Barrens/Grinding Halt split 7″ (I know that’s not an album but I’ve listened to it lots in the year 2015 and its fucking great.)
– Enablers | The Rightful Pivot (That did come out in 2015!)
– The Machismos | Brit Pop Fucked My Wife
– Obliteration | Black Death Horizon
– Smashing Pumpkins | Mellon Collie and The Infinite Sadness
– Toto | Africa: The Best of Toto
– King Diamond | Abigail
– Fatso Jetson | Toasted

CM: It’s a tie between Cry Me A River and Chappel Beer Festival.