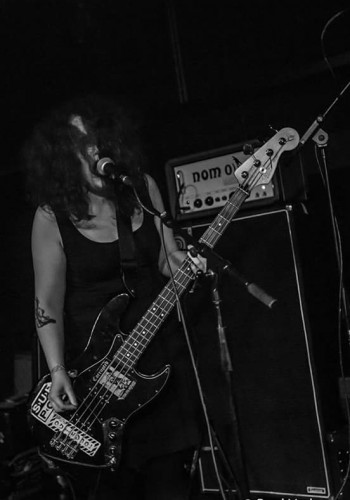 When our writer Richard Collins isn’t smashing out reviews for us, he spends some of his time putting on gigs with his mate Lins at a night called Cosmic Carnage. When he’s not doing that he can often be found talking complete bollocks, we have decided to capture some of this bollocks and call it the ‘Cosmic Roundup of 2015′. He’s caught up with shit loads of our favourite people from across the scene and we’ll be publishing one every day until we run out… like the weirdest advent calendar!

Tanya plays bass in two brutal bands called Bismuth and Nadir. When she’s not doing that she’s studying volcanoes or comets or volcanoes on comets or something. Bismuth released a jaw dropping album entitled ‘Unavailing’ this year, here’s what she thinks about what’s going on around her.

TB: I’m not bad thank you – I’m currently drinking coffee and listening to Kannon, so today is a pretty good day so far.

CC: The first time I saw Bismuth play was a couple of years ago and it was one of the most brutal things I have ever seen. Where does this bleak music come from?

TB: Most people have a part of their self that they rarely share with others. This part usually holds all of the sadness and frustrations that have happened during their life time. The bleakness comes from this “hidden” part of myself. I’m not very good at talking with others, so music is my way of processing these thoughts. Joe feels similarly, you can tell when he has had a bad day, as he comes to practice and beats his drums to pieces.

CC: Unavailing is incredible, are you pleased with it?

TB: Thanks very much Rich! When we went to record, I wanted to try to make the best album we could. We were incredibly lucky to be able to record with Chris Fielding. He is a very talented engineer, whose recording methods really pick out the different layers of our sound, plus he let me use his massive matamp cabs! When I first heard the album and could clearly hear the 3 different amps, as well as the drums having their own space, I was very happy! James Plotkin then added more to the layers by picking out certain frequencies on the master. Thanks to these two people I am very pleased with how the album sounds.

CC: It was released by a few labels, how did that come about?

TB: Graanrepubliek Records and Tartarus Records have always been very supportive of us, and between them have put out all of our releases so far. Pressing a double LP for a small label is an expensive business, so we asked a few other labels to see if they would like to help with the album too. Luckily, Dry Cough Records, Box Records and Viral Age Records all wanted to help release the album too. I was surprised and a bit humbled that so many people wanted to assist with the release of the album. If you guys are reading this, thanks!

TB: As far as heavy music goes, we are pretty spoiled in Nottingham. Part of the reason for this is Stuck on a Name studios, where we practice. The person who runs it, Boulty, puts on gigs there pretty much every week, and has even allowed me to put on a few different gigs there too. There are at least three people who put on regular heavy gigs at the studio, and other venues, such as the Chameleon and JT Soar. Some nights there are hard decisions to be made on what gig to go to. There are loads of excellent bands from Nottingham too, Moloch, Dark Mother, Endless Grinning Skulls, Grey Hairs and Kogumaza are just some off the top of my head. It’s one of the best music scenes I have been involved in.

TB: That’s a pretty hard decision to make, so I’m going to cheat a little and pick two gigs. The Tombstone All-Dayer at the Star and Garter in Manchester was great, I finally got to watch Slomatics. I’ve been wanting to see them for about 4 years! It was great to play on a bill with so many friends and the atmosphere was excellent. Another stand-out gig was playing the Vera in Groningen, Netherlands. Graanrepubliek and Tartarus Records put on a “label party”, and we played with Slow Worries, Ortega and Art of Burning Water. Again, it was just great meeting with friends we had not seen in a long time and the sound was excellent! I think we made some plaster fall from the ceiling, this is when I know we are the correct volume.

TB: Kawabata from Acid Mothers Temple and KK Null played at Stuck on a Name a few months ago and it was amazing, I could watch Kawabata play guitar forever. The sound surrounded everything, and it felt like we in the audience were swimming in it. Highlight of the year for me.

TB: I picked up a copy of Kannon by Sunn O))) today and am really enjoying it so far. It has monastic qualities to it, but more time is needed to absorb it fully. Glass Underworld by DeadFader is one of my favourite albums released this year. When I’m at home I don’t tend to listen to much “heavy” guitar based music and electronic stuff has had a bit of a grip on me this year. Two heavy albums from this year I do love are Legion of Andromda’s “Iron Scorn” and Ommadon’s “Empathy for the Wicked”. They are both just horrible, really horrible.

TB: Sadly I didn’t make it to any festivals this year, due to amp repair bills. This meant missing Roadburn. It’s always my favourite festival whenever I get a chance to attend. I’m going to make it there next year, for sure.