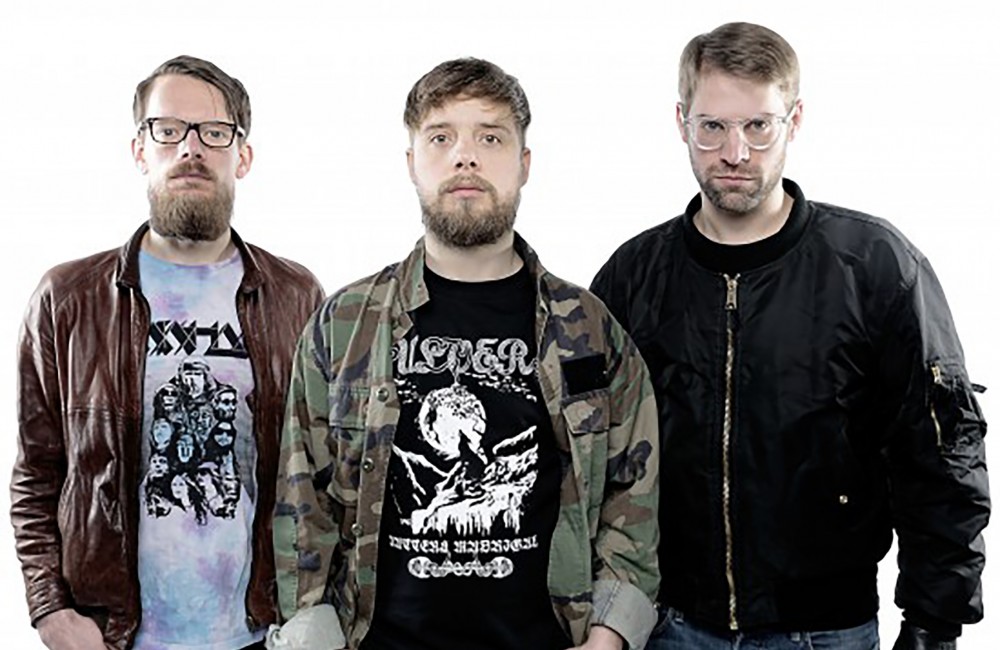 Sun Worship are a black metal band from Berlin, Germany. Guido Segers caught up with Lars (guitars/vocals) and Bastian (drummer) who answered some questions, while busy touring and spreading their great music. Read about the band’s view on black metal, their inspiration and what it was like to play Roadburn Festival.

(((o))): Can you guys introduce yourselves a bit, for the ones new to Sun Worship?

Lars: Sun Worship is a band that started in early 2010, has drums, guitars and vocals and was started with the intention to write songs and play them live.

Bastian: We play what pretty much everyone calls black metal. We like to make music that is fast, harsh and dark. It is supposed to generate a trance-like experience.

Lars: Because the sun will be the death of everything around it in the end!

Bastian: Yeah man! There is an interesting paradox in worshipping the sun. You’ll never be able to reach it and if you do, there will be nothing left of you. However there is a lot of interpretational dimensions of the name. I like that it refers to the religious aspects of black aesthetics by somehow turning the cliché into the opposite. Also, people think we’re hippies because of the name, I like that this causes some irritation.

(((o))): Do you have any funny experiences, due to people thinking you’re hippies?

Lars: We had a funny experience once when people threw their beer cups at us (and missed) because they couldn’t handle the fact that we didn’t look like them. Provocation is not something we actively pursue, that would be kind of dumb and not what we are about. We put our hearts and minds in the music, so it’s kind of offensive when people think we’re about that. I prefer to do things for my own good and pleasure and according to my own rules and standards, and if that rubs people the wrong way or fails to live up to their expectations and upsets them, fine with me. Saying that you enjoy the irritation you stir in people once in a while doesn’t mean that you have to limit yourself to that cause. We are perfectly aware of the fact that we don’t live up (haha) to some of the ‘standards’ people have come to associate with what they call black metal. We see things differently.

(((o))): How did you get started playing with this band and did you guys have any previous bands (either separate or together)?

Lars: We didn’t have bands together, but we shared the stages and sceneries. That is how we knew each other. The idea for Sun Worship had been around for a while, since our drummer and I had been into this kind of music since our teens. It did take us some time to get started with it though. Bringing in a third person was necessary to make it work, because we have rather chaotic minds.

Bastian: In German terms it was a so-called ‘Schnapsidee’, Lars and I got pretty wasted one night in a bar and then the conversation was basically like: ‘Dude I want to play in a black metal band…’ Which got the response: ‘Yeah man, me too!’ No further intentions, I guess… We just did it.

Lars: We had to get wasted a couple of times to remind ourselves of that idea actually.

Bastian: That’s pretty much it. I play squash and do yoga… Spiritual enlightenment. I also help organizing shows in a DIY space.

(((o))): What are the main inspirations for your sound, the main purpose and goal behind Sun Worship?

Lars: There’s music in my head ever since I roamed the forests around the place where I grew up. It’s been with me since my childhood and it wants to get out.

Bastian: Reaching a higher state of consciousness by exploring the limits of speed in relation to physical abilities. Creating a dark and negative atmosphere to gain a positive experience. That’s what I like about it. For me it is a lot about canalizing the concrete nature of Berlin. At some point I realized that living in Berlin can be quite challenging.

(((o))): I’m interested in the aspect of Berlin as an inspiration for your sound. Can you elaborate on that? Would Sun Worship sound different, if it was from any other city?

Lars: Would Sun Worship even exist in another city? Probably not… Of course your everyday surroundings are going to influence you no matter what, but I wouldn’t go so far as to claim that this city as a place inspires me. If anything, it inspires negative energy which I need to vent. I am inspired by other things and other places and I’d rather use the music to escape from here. That said, people in Berlin have created an open infrastructure over the years which is both inspiring and helpful. It’s an ambivalent relationship and this ambivalence is an inspiration in itself.

(((o))): Black metal is a genre known for its amount of cliché elements and such. You guys seem to take your own approach to it. Can you tell a bit about that?

Lars: I have no interest in dressing up to look tough or whatever. Anyway, there’s a lot of cliché elements in our music (and artwork too) but we celebrate those. We take our art dead serious, not so much ourselves though.

(((o))): For many bands and fans black metal is more than just music. What do you think about that?

Lars: I think it’s a bit of a childish concept especially considering the alleged ‘rules’ and ‘values’ of black metal, but hey, for me pizza is more than just food so who am I to judge?

Bastard: For me music is more than just black metal, an emoticon would make sense now. Anyway, I wouldn’t go so far, and judge peoples attitude towards the genre, but I must say that I don’t really like the concept of scenes and their aesthetic rules in general.

(((o))): How would you describe the genre, what does it mean and what makes a black metal band?

Lars: It’s been dead for at least 20 years, for better or worse. Once in a while I hear a band which captures the spirit at least musically (Murg would be a good recent example) but generally all the good bands today are black metal influenced (us included) only anyway. I find that a lot more respectful than to try to desperately re-enact what some Scandinavian teens did back in the 90s.

Bastian: The last few years it has become very popular again. A lot of kids from the hardcore and punk scene just realized that it’s by far more than just corpse paint, torches, spikes and full moon nights. I think the genre and its development profits quite well from it.

Lars: There isn’t any. It’s just been canonized one way or the other, for all sorts of reasons and due to all sorts of perspectives. That’s the way I see it. To me, black metal – or the essence of it, if you wish – is closer to ambient music, krautrock and early hardcore punk than to any other heavy metal subgenre. Monotony, minimalism, repetition, that certain kind of atmosphere, a refusal to play by the rules. One of the very few bands that I can actually apply that to are Darkthrone circa 1992-1994 (and they were very much inspired by 80s heavy/thrash/black metal actually). It’s a complex matter. Suffice to say that you’d rather find “my” essence of black metal on a Swans, Phill Niblock or Mt. Eerie album than on any “black metal” album released during the last 20 years.

Lars: It was a very good experience. Very professional, but very friendly and exceptionally down to earth at the same time. The enthusiasm and attitude of the people there were very inspiring.

(((o))): In some preview I read that you guys were music nerds, is there any truth to that?

Bastian: Can’t deny it. No.

Lars: There’s so much good stuff out there. And it’s easier than ever to access it. I suppose that ‘music nerdism’ allows us to approach our music with an outsider perception. Not in the sense that we try to incorporate all kinds of weird stuff into our songs, but just for the sake of it. It’s the mindset that matters.

(((o))): Your record Elder Giants is my favourite Roadburn purchase. Can you tell a bit more about its creation process and the general concepts behind the album?

Lars: Thanks for the compliment. We had five new (at the time) songs in the summer of 2012, which we went on to record by ourselves. Two of them became the Surpass Eclipse 12″, which was released in early 2013. The other songs partly lacked lyrics and were sitting around until we discovered that the rough mix of the recorded versions suited them quite well. So we finished them, vocals and all, and basically sent the rough mix off to be mastered. We added the ambient track and thought we had an ok sort of demo tape (which us and View From The Coffin planned to release in a small edition) to fill the gap between the split 12″ w/ Unru and whatever would become our first album… but then it actually became our first album. So there was no masterplan or that kind of thing really. And no clearly cut out concept either – however, the album turned out to be a very personal retrospective on and tribute to the music, which initially inspired its creation, hence the title.

(((o))): The album feels more like a big whole, a unity, than just a collection of songs. Is this intentional?

Lars: The songs were all written within three month or thereabout, that would perhaps explain it. As I said, there was no plan to create an album the way it turned out.

Bastian: A huge amount of the song writing process happens in the rehearsal room. We listened to the same records during that time, somehow we got into a vibe that lasted a few songs.

(((o))): How has the reception been, both inside the scene as well as outside?

Lars: I have no idea about the scene to be honest. Reviews were mostly good and people tell us we made a good album. I’m largely satisfied with it myself and that’s what’s ultimately important.

(((o))): Black metal from Europe seems to be returning to full power. What bands from Germany do you think people should listen to (and why)?

Lars: Unru, Ultha, and Antlers, because they’re damn good and because they have their hearts and minds in the right places.

(((o))): What are the future plans for Sun Worship and what do you hope to achieve with the band?

Lars: We’re working on new songs and ultimately a new album, getting that one finished and released is the main goal right now. It’s going to be darker and heavier, but we disagree on that.