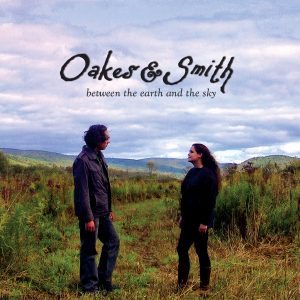 Released on February 2, 2016 via Bandcamp

After listening to this EP several times over, I feel lulled into a strange sort of calm. Soaring strings, beautifully arranged harmonies and carefully constructed arrangements have worked their magic on me. That’s what I love about folk music – it resonates with something deep inside of us; part of our ancestry. It relates back to a time when humans were a lot closer to nature, and perhaps to each other, and reminds us how sometimes the most simple things can be the best.

Between the Earth and Sky is the latest EP from folk duo Oakes & Smith, featuring guest musicians from HuDost and YES. Both living in Western Massachusetts, you can hear how much the landscape and nature surrounding their home has influenced Robert and Katherine’s music. It is folk it its true form – telling stories and myths of the earth and human spirit.

Opening track, ‘So Beautiful’, sets the scene perfectly with the soft, slow cello pulling at your heartstrings. The cello is not known as the most emotional of all instruments for nothing – it immediately fills you with warmth and a sense of anticipation, building the foundation for the first line: “Something’s moving between the earth and the sky”. It is an eponymous song title; a really stunning track.

Katherine’s vocals are so pure and clear, they almost crystallise in your head. Her voice is perfectly controlled and yet holds deep emotion and wisdom in it’s tone. The vocal harmonies featured in each track are well-crafted and move in perfect motion with each other, rising and falling in waves of sound. I feel this is one of the strongest elements of Oakes & Smith’s music – their sheer musicality and composition is of an impeccably high standard.

‘Surrender’, a moody piano ballad, really stood out for me with its mournful lyrics and slow-building arrangement, reminiscent of Eva Cassidy’s ‘Songbird’. Katherine sings “As I saw you fade from view, my heart cracked / And I surrendered to your love” and the listener surrenders to her ethereal voice, watching the train leave the platform alongside her.

The piano also needs to be mentioned on ‘Presence’, a haunting song woven together by cello countermelodies, gently strummed acoustic guitar and a bass that almost sounds like a harp at the start of the track. The vocalists softly chant “In this haunted house all night your ghost was by my side”, perfectly depicting the confusion of loss and grief.

The centrepiece of the EP, ‘Never Let The Light Die’ is a more uplifting number, with the introduction of more percussion and beats driving the harmonies towards a rich, melodic chorus.

‘Closer To Home’ rounds the record off with a hazy new age focus, introducing Jon Anderson’s punctuating vocals (hailing the Peter Gabriel influence). The track, and EP, ends with an understated harmonised note, suggesting the journey is not quite over. With their excellent musicianship and soulful songs, there is certainly more to come from this duo.