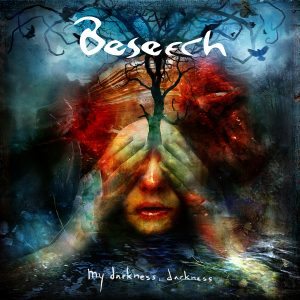 Released on March 4, 2016 via Despotz Records

Eleven years after their last album Sunless Days and ten years after officially ‘being put to rest’ Swedish goth rockers Beseech have re-animated to present album number six My Darkness, Darkness. For those keeping score, the current line-up features two original members in Robert Vintervind (guitar) and Klas Bohlin (vocals) with the rest of the line-up made up of new members who joined the Beseech cause in 2013.

The band ply their trade in melodic gothic rock that takes cues from various genre contemporaries such as Swallow The Sun, Sentenced, Paradise Lost and Katatonia, but with generally a more up-tempo nature and a male/female vocal tag team of Klas and newcomer Angelina Sahlgren Söder, who complement each other very well.

They set up their stall in opening track ‘Beating Pulse’ greeting us with an urgent melodic riff backed by driving rhythm section, providing a base for the unified vocals to work their magic. This in turn develops in an almost acoustic ‘jangly’ chorus and back into the main verse and briefly interrupted by mournful guitar lead for affect.

It’s a very simple formula, but it works a treat and the band obviously thinks so too as they pretty much stick to this formula for the rest of the album, with only minor changes incorporated to the song structure.

‘The Simmering’ opts for a slower marching pace and focuses on the male vocals in and generating atmosphere, whereas ‘Bloodline Fever’ has a greater contrast between the up-tempo riffing and stripped down cinematic, while delivering a killer chorus!

‘Mr. Uninvited’ is one of the few duds as they try something new with voice dialogue, darker riffing and deeper vocals, but the juxtaposition of the ‘floaty’ chorus doesn’t really work. Thankfully the title track gets them back on track with a piano heavy groove, however they do nail the darker tone with the next run of tracks with ‘Atmosphere’ and ‘The Ingredients’, incorporating driving acoustic guitar work and ‘Highwayman’ chugging dramatic riffing into the mix.

However one complete change of tactic is the surprising departure into post-hardcore of ‘One Last Call’ with the quiet/loud transition of melodic guitar and driving power chords bringing to mind Hundred Reasons, Hell Is For Heroes etc and it works really well with the ‘normal’ vocal delivery.

All in all a very pleasant ‘easy listening’ experience with a few neat tricks.