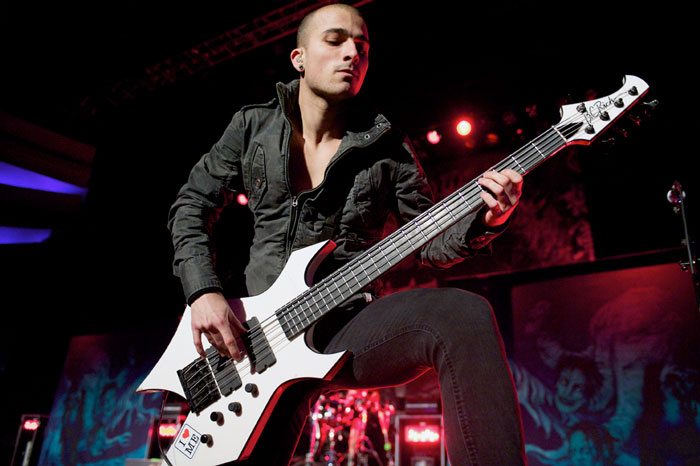 Last week Trivium visited Oxford as part of their world tour, which gave Nathan Lagden the opportunity to catch up with bassist and vocalist Paolo Gregoletto and ask him about the current tour, new band drummer Paul Wandtke and the current state of the metal scene.

(((o))): You’ve visited a lot of smaller cities on this tour. What was the thinking behind that, and how’s it going so far?

Paolo: Well it’s been going great, I think tonight’s sold out. I guess the reasoning behind it was that when we usually come out with a record we usually go straight into the major markets, usually the same thing in America or anywhere overseas, and we wanted to do something a little different. We wanted to focus more on some of the outside, or out of the way cities; the places that aren’t always on the tour schedule. We’ve always made a point to come and play different cities, this is probably our third time in Oxford, but we wanted to separate the major cities and the smaller towns and cities. It’s been great because you can be a little bit more intimate, but still bring a big show. You can get to people who can’t always make it to the bigger cities, because even when it’s only an hour or two away that a tough trip for some people, so we want to make sure that we’re not missing any of our fans as we do this whole world tour.

(((o))): That’s one of a few surprises you’ve given your fans recently. You had a social media silence before your new album and there was the change in style of the album itself. What have you made of the general reaction to it overall?

Paolo: It kind of changes. The initial reaction when you do something that’s unexpected is always going to be a mix of both positive and negative. The reaction six months later usually you see a lot of people changing their opinions on what they initially had. You see a lot of people who didn’t get it or like it at first now loving it. I’ve had that happen with albums before where I didn’t get it at first, and then I come back and listen to it later and I really dig it. So it’s been great, and the true test of the song is live, you can tell when a song falls flat on a crowd and we’ve been lucky because people really dig it. The focus was that it was going to be vocal driven and what we were expecting to see live is people singing and really latching onto the words and lyrics, and that’s such a great feeling when people know the words and can sing along with us so well. So that was cool and I think it needed a little time for people to really latch on to that stuff and it seems to be progressively getting better and better.

(((o))): And do you find that as well when you record the album that you have certain songs that you like more than others and then when you play them live, because of the reaction, that changes for you?

Paolo: Yeah, songs that I initially think are the best sometimes end up being ones that I like, but aren’t my favourite overall, and then songs that I ignored while we were recording become the songs that change everything for the record. And it even changes live, you play some songs enough and some really speak to you more than others. We have a similar situation I think to fans only we have to play the songs, and there’s a difference when you’re playing them every night and you see which ones you really love playing and ones that you don’t mind playing here and there. And now we’re rotating the set a little more, so that keeps everything exciting.

(((o))): You’re also a band which is known for never making the same album twice and intersecting genres. When you go to write and record, is that a deliberate thing that you set out to do, or do you just go with what comes naturally to you?

Paolo: You start to really write the stuff and you don’t really think about what you’re going to do differently; and then as you get closer to the record you start to conceptualise what the record’s going to be, what’s it going to stand for and what’s the question you’re trying to answer. Then you know what this album is. We don’t go in with the intent of making something so wildly different that it’s another genre, but we just want to have something different. We want to let the natural vibe of where we’re at in our career come out and not try to force something that isn’t there and not try to recreate something that doesn’t need to be touched. And we just let that process happen naturally. You just start writing and then you stumble across really cool and different ideas that you weren’t really thinking about, and that’s why it’s so important for bands to jam and rehearse. It’s the happy mistakes that make the album.

(((o))): You’ve been in the band for 11 years now. What’s changed in the band in terms of how you’re perceived and what the general experience has been like over those years?

Paolo: I think people have really noticed how serious we take the live shows. We rehearse a lot, even though we’re not all in the same area. Matt and Corey live in Orlando, but I live in South Florida and Paul, who has been the most recent addition, lives in Chicago; but we still make an effort to rehearse before tours. Before this tour we even cut our break in half just to rehearse for a few days and then rehearse again when we got here. And to me that’s an important thing because I don’t want anyone leaving the shows saying “wow that was really sloppy”, “they didn’t seemed prepared” or “it seemed like they were off tonight”. We’ve just made it a point to push ourselves to be as perfect as humanly possible when it comes to a live show, and that includes taking care of our voices. Matt and I are very on it about not going too hard, taking it easy with drinking and just making sure we’re not letting the wrong stuff get in the way of why we’re here. And the same goes for the songs, we want to give people exactly what they came out for and then surprise them with a couple of choice cuts from the other albums. I think people have noticed that because we see a lot of stuff about people saying “I’ve never seen them tighter than this as a band” and that is the ultimate feeling.

(((o))): You mentioned Paul [Wandtke, drums], obviously he is a very new addition. How is he settling into the band?

Paolo: Well, that was the crazy thing because we’d been looking at some drummers and they’re all killer drummers, but with Paul there was a certain level of enthusiasm about the gig and about the potential of playing with us. He took a lot of initiative, saying that he was ready to do the Knotfest gig if we wanted and sending us videos every couple of days of the songs he was learning – he was learning a new song every three days at home over the course of two months. And I think that said a lot about him, and that was the kind of thing we were looking for. We knew that we were looking at guys who had the skill, but what about the other things? What’s their initiative, what are their goals and do they take the initiative to do things even when not asked? I think that’s a great thing about Paul, that he’s a hard worker just like us and that’s what we were looking for in a drummer. We wanted a guy who could manage the songs, that can play the songs and not let the songs play them and someone who can get the detail that each song has. And it’s been fun because now we’re diving into songs that we haven’t played in years and it feels refreshing to be playing a lot of them.

(((o))): Given that you’ve got two really good up and coming bands on tour with you, does that give you a lot of hope for the future? Do you think that metal’s going to be in a good place in a few years to come?

Paolo: Yeah, I think it will because it always ebbs and flows a little bit. There’s always going to be those down periods where it seems like it’s going to go away but then something refreshes it, something kicks it back into gear and you’ll get a year where there’s just an unbelievable amount of new records that are just incredible; and that goes with people’s débuts and also bands that have been around for a while like us, or bands that have been even longer in this game. And I think it’s great, there’s still that fire for people to get out there even when there’s all these dire things about the music industry, or that there’s not as much money in it, this and that. And even when you see older dudes complaining that rock isn’t what it was, well there’s still kids who feel like it is and they have something to say. The youth is what makes the genre, if you don’t have people who are ambitious and want to get out there and be heard then the genre will go away but there always is that stuff and I’m hopeful because we keep taking bands up that are like that and that are trying. So I don’t think it’s as dire as a lot of people make it out to be, you’ve just got to be in it for the long haul and don’t expect success straight away always.

(((o))): If you could go back in time to one period of history, where would you go and why?

Paolo: I would love to go to the late ‘60s, early ‘70s. I’ve actually been reading a book that focuses on that period in music and the turmoil of the world, not because I like turmoil, but I think because if I could go back there and come back that I’d have a good amount of lessons to bring to people. I feel like our time now mirrors it in some ways, in some ways it’s totally different, but I think it was such an interesting time for just everything. Art, music, the state of the world. It was crazy, but some of the best music, movies and everything just came out of that period. And I think when the world’s in turmoil you got to turn to those things to make sense of it all.