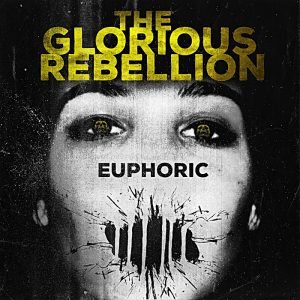 The Glorious Rebellion are not ones to pull punches and the above mission statement perfectly sums up the Floridian three piece’s debut album Euphoric. Its thrilling mix of stoner and noise rock generating a glorious cacophony of aggressive RIFF worship.

That’s not to say they abandon any sense of melody as the brilliantly titled follow up track ‘Emmett Brown Has Never Met a Scott That Wasn’t Great’ adds a touch of radio friendly grunge swagger reminiscent of Soil at their best to proceedings. ‘Benaquyl’ keeps this going with high tempo stadium rock a la Black Stone Cherry, this change in tempo is welcome even if it does feel a bit out of place surrounded by its more hardcore brethren…

…‘Have I Told You Lately That I Loathe You’ gets us back on the heavy vibe generated by the opening track, dispensing with the “radio friendly” for a loud relentless mid paced sludge dynamic and hefty fuzzy grinding RIFFS, rumbling bass and caustic vocals (including an amusing diatribe about ‘selling out’), which ‘The Dirtiest Dream Jobs’ continues albeit with a more ‘southern’ vibe providing cover for the vitriolic lyrics. Speaking of lyrics, they certainly provide colourful imagery bringing to mind Neil Fallon if he was aggressively angry with a point to prove.

Finale ‘Bitches Hate Misogyny’ keeps the rumbling stoner groove wagon rolling with vicious intent and suitably plays us out in a prolonged squall of feedback.