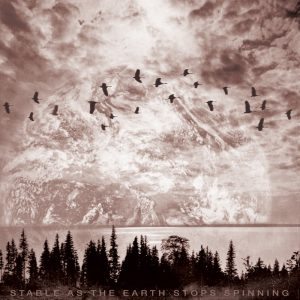 Post-Rock is a label that many bands around the world have adopted in the past few years but there are so many variations that at this point I’m not really sure what it means, most bands just end up sounding as a rework of their influences; luckily Then They Flew is not one of those bands. The music of this Portuguese quintet has a special feeling, the amazing structures and complex instrumentalization have the power to make us feel as if the world has actually stopped its course; we look down and everything is shrouded in chaos, in that moment we realize that we are flying too.

‘Stable As The Earth Stops Spinning’ is the first release of this band that comes from Lisbon, Portugal; something we can notice in this album is that the musicians have a lot of experience with their instruments and understand each other perfectly, they really know how to create great songs. The opening track is named ‘La Lys’; it starts with a little guitar solo that for a few seconds pictures a calm scenario but before we get too relaxed it gets disrupted by a powerful wave of noise brought by the other guitars, bass and drums;  in the middle of the song right under the distorted guitars the most amazing bass line that I’ve heard in months appears and seconds later creates a beautiful bridge between the main part of the song and the amazingly chaotic final where the rhythm is fast and vigorous, what an amazing song.

Track number 2 is named ‘Rooftop’, the beginning is also calm, we can hear some rain falling on us while the guitars start building a sweet melody, as the bass and drums get involved the tempo increases its speed but never gets too furious, it actually slows down and the melody is soft again, but not for too long, by minute 6 it starts speeding up, getting so noisy and a few seconds later a nice guitar line guide us into a rain that suddenly becomes a storm.  ‘Evergreen/Aftermath’ is a delightful song where all the instruments coexist in a peaceful and optimistic atmosphere, there are a few crescendos that at their highest points create fuzzy vibrations in our heads but there are also some calm passages of soft guitars.

‘An Enemy Will Bring Us Together’ makes you feel like someone is chasing you, even in the calm parts you can feel some kind of danger is behind you and when the drums are heavier the anxiety is higher; the last minutes of the song are beautifully adorned with strings that arise from under the noisy wall of heavily distorted sounds. The final track is ‘Owls’, a song that has a lilting melody, a sample from an episode of Twin Peaks and a series of raw riffs that keep our hearts beating really hard for the last 6 minutes of this fantastic album.

‘Stable As The Earth Stops Spinning’ is a magnificent journey that was delightfully crafted, everyone who enjoys this “genre” will find it fascinating and addictive.