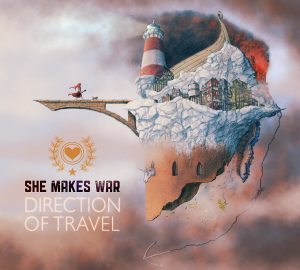 Thank goodness for She Makes War. There’s nobody else quite like Laura Kidd in the UK music scene at the moment, especially in terms of how she approaches that scene and deals with the problems within it. In a world where everything has to be now-now-now and free-free-free it hardly caters for one person who just wants to get a fair crack at accruing an appropriate reward for creating stories and telling them to an audience. The 18 months between the recording and the release of Direction of Travel isn’t exactly unheard of but it’s indicative of the painstaking, crowdfunded process that Laura’s gone through.

I hope it’s been worth it. Because it sounds worth it.

She Makes War’s previous output has never shied away from bold, emotive statements rich with imagery of pain and loss. And the first we hear from that tender yet fierce voice is “We’re not safe here now / I have burned the lighthouse down”; obviously it’s a metaphor but bear with me. One of my favourite TV shows growing up was Round the Twist which features a family living in a lighthouse amid loads of weird. (Actually, I recently bought the box set and it’s still amazing.) Anyway, if that lighthouse had been Zippo’d, I’d feel horrendous. Because those pleasing concepts of safety and of home are what we look for in relationships, don’t we? Just like what we looked for in everything as kids. The rawness in She Makes War songs is what caught my attention in the first place six years ago and it’s still there. Not just in the lyrical content either; the string arrangements, cutting guitars and ukes, and the deep basslines each tell their own story. There’s no hiding away.

Carrying on despite everything and moving to your own beat can be part of any coping process. And it’s the relentless rhythm of this record that makes the biggest impression. Not that it’s a rampage; far from it. There’s time for slowing down as well as stopping entirely; having a sit and contemplating things. But there’s always something there that seems truly reflective of what’s in the conversation. It fits. That said, I’ve always thought that She Makes War is at her best when she deals in pure snark apace. ‘Cold Shoulder’ is utterly wonderful in this regard; a romp that at its heart eviscerates anyone who messes around and doesn’t deal in complete information.

And that’s what this record evokes, really. A desire for the whole picture, because the alternative is, well, a bit crap. A break-up album for the hopeful, able to draw strength from the past. Just the title, Direction of Travel, suggests movement and progress. “Please don’t leave me yet” is perhaps the standout line on the standout track, ‘Please Don’t’; a straightforward request from somebody who just wants to love and be loved. I really hope She Makes War doesn’t leave us yet; there’s clearly a lot more to come.