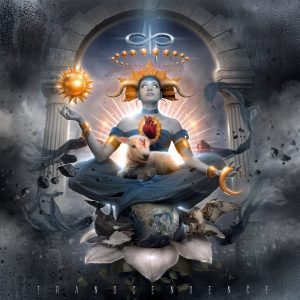 Released on September 9, 2016 via InsideOut Music

For die-hard fans like myself, a new Devin Townsend release is nothing short of an event worthy of a national holiday, with so much of the anticipation coming down to not knowing what to expect. Townsend’s output has become increasingly genre-defying, with dark ambient, experimental noise, and even country, nestling alongside progressive and extreme metal. The latest release falls under the Devin Townsend Project banner and continues the epic progressive metal that started with Addicted, through to Epicloud and Z2 most recently, evolving the sound rather than completely reinventing it.

Transcendence is a release that seems to look back, evidenced by opener ‘Truth’, a reworking of the same track that opened 1998’s Infinity. It may seem strange to open Transcendence with an old song, but I think it shows that we’re dealing with similar themes: the nature of the universe, human consciousness, and other similarly metaphysical and grandiose subjects. However, the key here is that Townsend is approaching these ideas with an entirely new frame of mind. This isn’t the post-mental breakdown, potentially drug-addled Townsend of 1998 – this is the sober and grown-up Townsend of nowadays, who examines the same questions with a view that is unclouded and grounded in a truth far more believable than the ‘Truth’ of Infinity. The song ends with Townsend softly singing “everything’s changed” and you get the impression he’s in a better place than he’s ever been before.

There are two other notable differences that jump out to me on listening to Transcendence’s opener, the first being the production. Townsend has always been known for a huge production style and while the scope of that sound hasn’t changed, it’s far tighter than it’s ever been before, with this probably being the best-produced Townsend album I’ve ever heard. This improvement seems to have come about from change in the way Townsend wrote and produced Transcendence. Instead of taking charge of all aspects of the making of the album, Townsend opened up and allowed greater input from the rest of the band, saying “I like to think after so many records with these guys that I don’t really have to be at the center of everything. I can trust a team of people – the right people – to help where I need help.” This help extended to the engineering, “I need an engineer who has better ears than me. My ears are getting tired after all these years.” The improvement a fresh pair of ears makes is evident and while Townsend is still directing the experience, more collaboration has led to more ideas and if this reduces the likelihood of burnout, I’m all for it.

The second of the two notable differences evident on ‘Truth’ is that the drumming is the best we’ve yet to hear on a Townsend release. For speed and sheer brutality Gene Hoglan’s your go-to guy, but Ryan Van Poederooyen has outdone himself on Transcendence, and you get the feeling he’s had greater creative control. Either that or he’s simply at the top of his game.

When ‘Truth’ finishes we’re left with the sparkling synth we became familiar with on Infinity, and no matter how many times I listen to it I can’t help but expect the snare rudiment of ‘War’ launching us into ‘Christeen’. Instead, we’re greeted by ‘Stormbending’, a song that brings to mind both 2003’s Accelerated Evolution as it does 1997’s Ocean Machine, the latter evoked in the echoey line, “I remember the rainy days in China Town”. ‘Stormbending’ is grand in scope, soundtrack-like in its evocative level of expression – if your soul is not lifted at the grand climax around 4 minutes in, you’ve got some searching to do.

The soundtrack level of spine-tingling doesn’t end on ‘Failure’. Three tracks in and we see that while Transcendence is instantly familiar, it manages to be refreshing and novel, with hooks so strong that they only improve with repeated listens. Also on display is some of the best singing yet from Townsend, with higher registers fearlessly explored. As I listen to this song, I cannot help picture in my mind the trailer to this album, hair-raising in its theatrical intensity.

Single ‘Secret Sciences’ hits all the right chords when it comes to positioning Townsend as the leader of “happy metal”, while ‘Higher’ reaches Strapping Young Lad levels of heaviness and is one of the best songs on the album: it begins gently with acoustic guitars and explodes halfway in, rapid double kick drum abound as do shouted vocals. At 8 minutes a choir-led crescendo supports the song’s transcendental theme. If Infinity was Townsend’s God-complex then ‘Higher’ shifts this perspective to something more mortal, looking down at himself rather than down at everyone else.

The rest of Transcendence continues to surprise and delight at every turn. Title track ‘Transcendence’ lives up to its name; ‘Offer Your Light’ is J-pop in its electro euphoria; while ballad ‘From The Heart’ slows things right down. The final track ‘Transdermal Celebration’ is a cover of the Ween original that ends things in typical arm-waving fashion.

Transcendence is certainly up there with the best of Devin Townsend’s albums and while it’s more evolution than reinvention, the increased collaboration hints at even greater experimentation to come in the future.