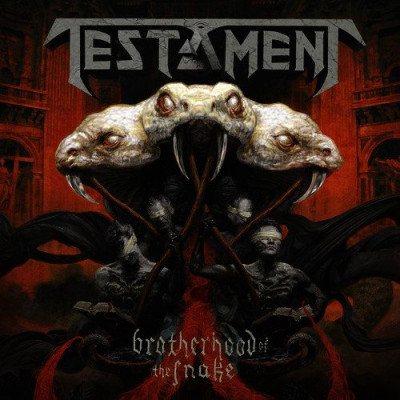 Brotherhood of the Snake by Testament

I was reading an article the other day that asked what was the next big trend in metal. It talked about the thriving popularity of black metal, the phenomenon that is Babymetal, and the constant progression of death metal. For some reason, this made me think about was the re-energization of the Big 8. When so many bands are looking for the next big thing, these bands continue to perfect their craft. Bands like Anthrax, Death Angel, and Overkill have “come back” and put out some of the best music they have ever made. Testament also falls into this category. Since the reformation of the original line-up in 2005, and the subsequent release of The Formation of the Damnation album, Testament has been a tear. 2011’s Dark Roots of Earth took things to another level, reminding the thrash scene again where many received their inspiration. Now Testament has returned with another fantastic slab of classic Bay area thrash in Brotherhood of the Snake, released October 28th, 2016 via Nuclear Blast Records.

Testament was not able to retain the original line-up past Dark Roots of Earth, but the current version may be the best ever under the name. As always, the legendary voice of Chuck Billy is here, along with his ever-present partner in crime Eric Peterson. The master, Alex Skolnick, is back on guitars, along with Testament alumni Steve DiGiorgio on bass and Gene Hoglan on drums. This is the first time DiGiorgio and Hoglan have played together in Testament, but they have been together in multiple bands, so their chemistry is immediate.

The opening/title track is your indication that this killer rhythm section, along with Peterson’s prolific riffing, are going to propel Brotherhood of the Snake. ‘The Pale King’ takes the groove up a notch, as well as an opportunity for Chuck to flex his melodic muscles. ‘Stronghold’, ‘Centuries of Suffering’ and ‘The Number Game’ carry the old school thrash torch high, with choppy tempos and blistering solos from Mr. Skolnick. Not one to stray away from any subject when it comes to lyrics, Brotherhood of the Snake has everything from tales from ancient Samaria, biblical references, and a discussion of the legalization of marijuana becoming big business. Some of these ideas could be presented a little better, but they all come across with head banging fury.

In a long and storied catalog, Brotherhood of the Snake is musically Testament’s best thrash record since Practice What You Preach. Nearly everything about the musicality of this record reminds me of their late 80’s heydays. With 10 songs at just under 46 minutes, it’s pretty easy to blast through this record, and then hit play again. Testament have always been one of the stalwarts of the Bay Area thrash sound, allowing them to be included in the conversation with bands like Metallica, Megadeth, and Slayer. Brotherhood of the Snake again proves their merit.