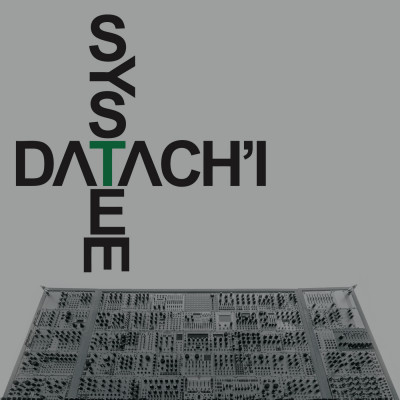 In Joseph Fraioli’s first Datach’i album in a decade, I can hear two modes of self in symbiotic operation. The first is that of the technical obsessive. The New York composer has spent the last ten years in commercial sound design, producing rich and visceral sonic accompaniments to adverts by Google, Squarespace and Hyundai: soundscapes packed with hyper-realistic explosions, gurgles of water over sea flora and the eerie hums of electronic metro train engines.

System is built upon the same sort of micro-level synthesis, as Fraioli works exclusively with the Eurorack modular synthesiser to carve out rhythms that emulate pebbles tumbling down a hillside, the chatter of strained modems or the clangs of digitised metal objects. Sounds expand and retract like pieces of elastic, or behave as though beholden to the respiratory processes that govern organic movement. They surge forward, they rest, they recuperate, they continue. I find myself marvelling at snapshots of happening just as I do with Aphex Twin or Richard Devine; individual moments manifest as exact constructions of equalisation, compounded harmonics and woven syncopations, just how figures in mosaic drawings emerge from the precise interplay of numerous tiny shards.

Yet this isn’t just a cold laboratory exercise, and the second mode of self on System is that of the vulnerable, mushy human being. Over the constellations of chatter and glitch, Fraioli drapes melodies of simplicity and immediacy: the droning chords of ‘512521’ float up and down like an anti-gravitational ribbon, while the optimistic three-chord refrain on ‘Margin Of Error’ rises above the percussion like campfire smoke, surreal in how its stillness pays no heed to the rhythms that rumble frenetically beneath.

‘Waveguiding’ is the most remarkable of the album’s 16 tracks, with a shoegazing chord progression that emanates from within the most unlikely scaffold of stockpiled electronic shrapnel. At times it feels as though two speeds of time are grinding against eachother: the hyperspeed of the album’s pattering percussion, and the comparative stasis of the melodies that ooze into view like clouds, whose nonchalance occasionally gives the impression that the chord patterns have formed through collisions in separate, fateful strands of chance.

It’s difficult to pinpoint exactly how Fraioli manages to bring these elements into harmonious co-existence, and perhaps that’s the point; while System may be consistently impressive for its microbial intricacy, the album’s emotional allure transcends the capabilities of raw technical aptitude or simple rationalisation. It’s evident that much of his time away from Datach’i has been spent developing a deep intimacy with his instrument, and it’s a delight to know that he hasn’t shed an affection for human intimacy in the process. A beautiful and intimidating record.