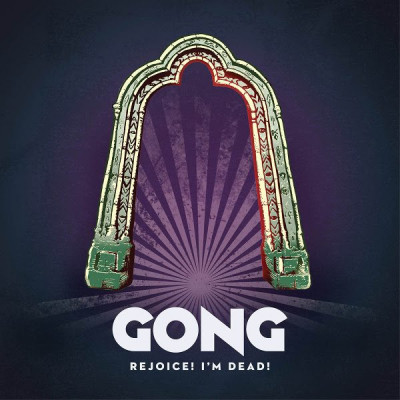 Gong’s psychedelic and anarchist roots have been well documented ever since the band’s inception in the late 60s, but these themes seem all the more pertinent on the band’s first record since founder Daevid Allen’s passing, Rejoice! I’m Dead!

Whilst plenty of music released this year has dwelled on anger or depression (and given how tumultuous 2016 has been, for very understandable reasons!), despite the bleak circumstances of its creation Rejoice! I’m Dead! is unrelentingly uplifting. It embraces the need to be fully present and promotes self-examination, even while calling for the end of capitalism.

“It would appear that, worldwide, there is a general move to the right being driven by big business/corporate management lobbies.

Given that I am traditionally from a socialist background, this does not sit well with me at all. Essentially, I have a great sympathy with the evolved form of Anarchism which of course depends on everybody in society thinking globally and acting locally by taking full responsibility for everything.” – Daevid Allen, Quietus Interview

There are alternatives to the way society is currently constructed, the way we perceive ourselves and others. To the unaware listener, titling an album in celebration of Allen’s death in 2015 could sound disrespectful, when the intent is anything but. Rather, over ten minutes the piece channels the grief into, perhaps unsurprisingly, rejoice over Daevid’s life and his achievements with Gong; “Rejoice, I’m dead! At last, I’m free!” This uplifting, life-affirming use of grief is not something one commonly comes into contact with in contemporary society, and its wholehearted acceptance of an inevitable aspect of life brings to mind the philosopher Michel de Montaigne who, speaking as Nature herself, said:

“Shall I change, just for you, this beautiful interwoven structure! Death is one of those attributes you were created with; death is a part of you; you are running away from yourself; this being you enjoy is equally divided between death and life.” [1]

Meanwhile, ‘Model Village’ sets the stage for a revolution, describing a small town so perfectly ruled that nothing of any import happens there. But while “the power and riches reside in the hands of the few, the radicals impatiently wait for their cue”. The track opens with a recording of Allen, speaking out against the current way of things: “We may be in denial, but capitalism’s autopsy will show it haemorrhaged corruption and it bred dishonesty.” Whilst the lyrics of ‘Kapital’ are left somewhat vague and unassuming, combined with the lyrics of ‘Model Village’ one can safely make the assumption that the former track is a nod to Karl Marx.

“[S]ome of us are still waiting for the new upside-down or inside-out Karl Marx but perhaps the new processor of political advancement will be a think tank. A circle of equals. A feminine zero instead of a masculine one.” – Daevid Allen, Kulturnews Interview

There’s the distinct feeling left here that the potential for change is inside all of us, it just requires a new perspective; in the acceptance of death, in overturning our denial of capitalism. So it’s only fitting that the lengthiest track on the album, the 12-minute ‘The Unspeakable Stands Revealed’, attempts to tackle this very topic. Neither Montaigne nor Marx are going to provide the ideal framework to analyse the lyrics however. So enters the most difficult of the great philosophers, Georg Wilhelm Friedrich Hegel. As this writer is not a Hegelian, for the most part the quotes and analysis below will be with reference to Bertrand Russell’s A History of Western Philosophy[2].

For Hegel, “the apparently separate things of which the world seems to be composed are not simply an illusion; each has a greater or lesser degree of reality, and its reality consists in an aspect of the whole, which is what it is seen to be when viewed truly. With this view goes naturally a disbelief in the reality of time and space as such, for these, if taken as completely real, involve separateness and multiplicity.”

“Knowledge as a whole has its triadic movement. It begins with sense-perception, in which there is only awareness of the object. Then, through sceptical criticism of the senses, it becomes purely subjective. At last, it reaches the state of self-knowledge, in which subject and object are no longer distinct. Thus self-consciousness is the highest form of knowledge. …the highest kind of knowledge must be that possessed by the Absolute, and as the Absolute is the Whole there is nothing outside itself for it to know.”

Or perhaps, in much briefer form, we can understand the very same concept when Kavus Torabi sings:

“Reflections that reveal the mystery further

Serve only to reflect the thing itself.

It’s only the unspeakable within that

Resembles more the mystery itself.”

Yet, as stated earlier, we know knowledge is not purely empiric for Hegel. There is an undeniable mysticism to his work. Gong’s lyrics, ever psychedelic, are not so much explicitly religious as they are consciousness-freeing. It’s about achieving this knowledge by getting in touch with one’s very nature and the cycle of life. If that be through a deity, then fine. If it be through personal contemplation, also fine[3].

If there’s anything that Rejoice! I’m Dead! purports, it’s that changes in how we approach ourselves and each other are critical if we’re  to reach any level of peace in the world. The album cries out for an acceptance of the natural ecology we as humans take part in as well as a greater understanding of oneself, but it also demands more from the society we live in. It’s uplifting, but critical. Given the tumult of 2016 and the uncertain future that lies ahead, these are values that are worth having.

[1] Montaigne also invented the essay form, essays which typically would start on one topic before digressing into various others. Kind of like someone writing an album review but continually getting side-tracked and talking about philosophers.

[2] Whilst it is true that by this point in his career Russell had completely distanced himself from his Young Hegelian roots, for the most part his summary of Hegel’s philosophy is left untouched by his criticism of it (which he leaves for later on in the Hegel chapter).

[3] N.B. Given these are Gong fans, there’s a 90% chance said personal contemplation will be encouraged by the consumption of certain substances.

Michel de Montaigne, ‘To Philosophize is to Know How to Die’: The Complete Essays