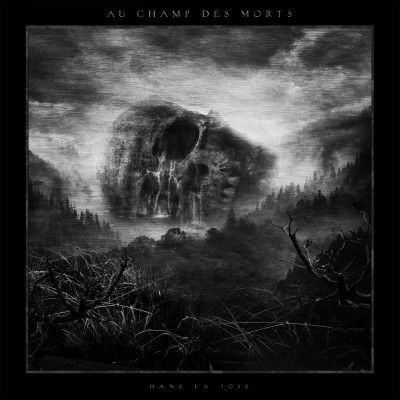 A lot of recent atmospheric black metal seems to have fallen into the same trap that post-rock did a decade ago. Adherence to the blackgaze formula has produced heaps of indistinguishable bands in the same way that the crescendo-rock trend churned out a bunch of Explosions In The Sky wannabes. This French outfit bewilderingly sidesteps that snare by refusing to adhere to formula.

Dans La Joie doesn’t just touch on post-rock and shoegaze, but also dabbles in doom, noise rock, hardcore, and straight-up rock and roll. Au Champ Des Morts‘ mastery of dynamics and arrangement allow them to effectively experiment with elements that shouldn’t work on paper. ‘L’étoile Du Matin’, for example, includes a shredder guitar solo while ‘Contempler l’Abîme’ begins with a bog-standard 4/4 rock drum beat. Unlike most of their peers, the band has also decided to fuck with the established vocal conventions of throat-shredding shrieking. They haven’t eschewed it altogether of course, but they’re playing pretty fast and loose with the aesthetics of the trve kvlt. On songs like ‘Nos Decombres’ and ‘Apres Le Carnage’ the tremolo-picking/blast-beat sections feature solemnly intoned chants, while ‘Le Sang, La Mort, La Chute’ features a sort of hardcore bark.

The stylistic shotgun blasts are unified by sense of longing and desperate melancholy. The emotional torture here is palpable and unforgiving, and yet often strangely uplifting. Au Champ Des Morts may have not succeeded in pushing black metal into entirely uncharted territory, but they’ve produced a unique and truly majestic post-black metal record. RIYL Deafheaven, Vanum, Vukari.

Listen to the full stream of Dans La Joie here: