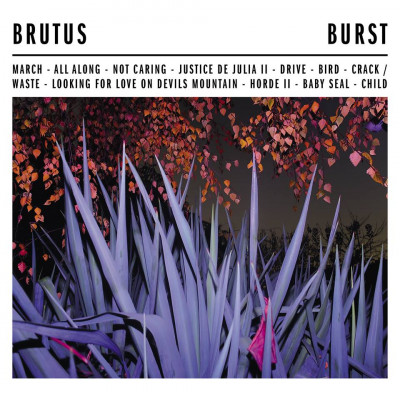 Sat here in the cold, dark of a British winter, the hazy summer festival days are a long way away and it’s easy to get jaded. Also, considering how good 2016 was for alternative music, I’ve been impatiently waiting for 2017 to serve up something exciting. Brutus’ debut album Burst landing in my inbox was exactly what was required. Recently, several bands have appeared that don’t fit neatly into any category. Brutus, certainly don’t either, a three-piece post-metal/post-hardcore with some math-rock influence and a female, singing drummer….interesting.

The album starts with ‘March’, an upbeat, almost pop-punk riff. I’m immediately drawn to their dynamic, upbeat sound. The band mentioned their beginnings as a tribute to Refused, that influence is strong here. On the second track, ‘All Along’, Mannaerts’ stunning vocals are immediately apparent. She screams, but never losing the melodic nature, the vocals are always on the edge of complete breakdown, but always controlled. This track shows more of a post-rock influence, insomuch that the traditional verse/chorus/verse song structure, instead the track builds before breaking to just vocals and feedback before continuing the expected crescendo. On tracks like ‘Not Caring’ her impassioned screams give the track a fast, punky pace, her vocals and guitar combining to a stunning effect. The track morphs into an instrumental post-rock/post-hardcore track building with power and intensity, ending with a counterpoint between guitar riff and screams.

‘Drive’ is a stunning, standout track on the album. The vocals are both powerful and delicate at the same time. The pace and timbre of the chorus is stunning. Only spoilt by a seemingly unnecessary minute long intro. In a similar vein, ‘Bird’ starts slowly but builds in a post-rock crescendo. The guitar takes a different dynamic with chunky power chords added alongside the riff driven phrases used previously. The vocals soaring over the background, her voice now used as another instrument. ‘Crack / Waste’ is a faster paced, hectic, with Omar Rodriguez-Lopez style riffs. The track feels a lot more punk and hardcore influenced. Again, the band’s sense for a great chorus is used, to amazing effect. Their PR mentions the members all having different musical backgrounds and tastes. This is apparent and a better album for it. The familiar aspects are there but they have not constrained themselves to a particular theme.

‘Looking for Love on Devils Mountain’ starts with another long intro, with almost an 80’s pop feel to it. By this point in the album I just want to get into the meat of the song and hear less intro, which don’t seem to match the feel of the rest of the track. That’s a combination of my impatience and deep-seated hatred of incidental tracks and long intros through. ‘Child’ showcase the other side to Mannaerts’ talents, drums. How on earth she manages to do both is a phenomenal task since neither of them seems to suffer.

The band’s sound is loud and heavy without using just detuned power chords, the vocals and guitar played higher up the neck, relying on the bass and drums to add heaviness and drive to the sound. ‘Horde II’, is a good example of this, bass and drums become cohesive. Overall, Burst is an excellent example of modern alternative rock, taking a variety of styles and blending them into something else. Mannaerts’ vocals are the standout here but ably backed up by the rest of the band. Various instruments both blending together and separating at different times. Also, their sense for a good, thumping chorus is a bonus. Highly recommended.