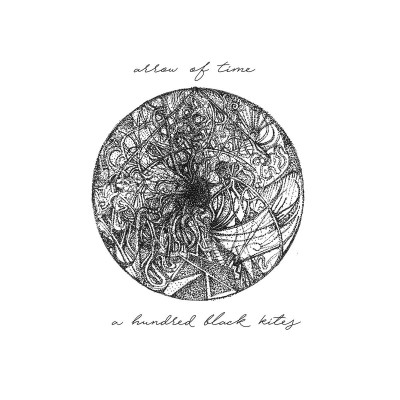 Arrow of Time by A Hundred Black Kites

I first came across A hundred Black Kites when they were featured on the Cheery Wave volume 4 compilation, but I did not follow or keep up with any of their output until now. The new release Arrow of Time is a 4 track album weighing in at just under 40 minutes and released through Tartarus Records on March 31st. It is the follow up to their self-released 2013 EP The Last Day, which available from their Bandcamp page.

The album starts with a track called ‘Horse’ and after listening to their previous EP, The Last Day, it sounds like a reworking of the track ‘Wild Horses’ from that EP. The new version takes the track to a new level and intensity. It starts with a drone that builds as you hear a horse galloping followed by neighing then the drums come in and reminds me of the band Isis, slowly building ready to erupt and it shows a theme that’s running throughout the release. The repetition builds until the explosion of sludgy heavy detuned guitar and bass fuzz that sounds visceral and colossal.

Up next is the track ‘The End’, which starts with birds and what I thought was a haunting female drone that bring back memories of slowed down version of Ofra Haza or parts of the theme tune of the remake of Battlestar Galactica. After checking with the label it turns out to be Georgia Lewis on vocal duties. The track ebbs and flows with the vocal running through the thirteen and a half minutes and you really get lost as the wall of sound washes over you. For me this is the standout track on the album.

The third track ‘Unto Others’ is the shortest track on the album and features Eugene Robinson of Oxbow fame. It starts with a field recording of the sound of birds and then the vocal drone of Eugene and a slow picked guitar part that would not be out of place in a Codeine track. Throughout the track Eugene provides a monologue as the atmospheric density builds and the strafing guitar crescendos and then falls away again until the end with Eugene saying the words “For me” and then the fade out of the birdsong.

The last track on the album, ‘Negative 95’ is the second longest track on the album coming in just under 11 minutes in length. It starts with a recording of a train getting louder as it comes closer with a drone building and then a loosely strummed guitar starts and builds until the distortion comes in at around 6 minutes. ‘Negative 95’ has a sparse arrangement, but you never get bored because the slow, doom-ridden dirge and ponderous beat keep you hypnotised throughout. Ending with the sound of a clock ticking and the drone fading away marking the march of time.

Am I not sure I have managed to cover how good Arrow of Time is. For me it just works as a whole and I love the production, which sounds very organic. With the addition of the field recordings I seem to be hearing lots of extra layers every time I listen and lose myself in their hypnotic performance. Now I can’t wait to hear what A Hundred Black Kites have in store for us next.