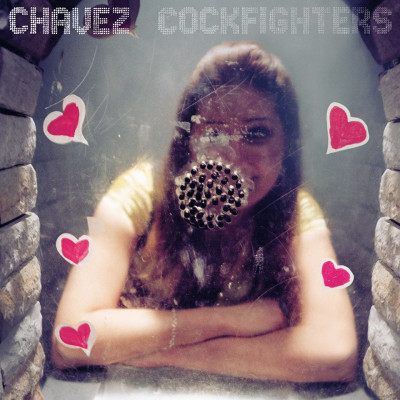 In the mid 90s, Chavez released two iconic records, Gone Glimmering and Ride The Fader. Those records didn’t really appear on the radar for many people with the exception of adventurous critics and indie-rock music nerds. They were jittery, raw, abrasive, awkward and difficult despite the sublime melodies and hooks buried under all the squall. But their influence reverberated throughout the underground rock landscape, informing a host of adventurous, noisy, arty not-quite-metal/not-quite-indie bands. Now, two decades after their last record, they appear to be picking up right where they left off.

The three-song Cockfighters EP is a bit less wiry and arty and a bit more burly and direct than their previous output, but for four dudes 20 years down the road, it’s a remarkably consistent entry in their body of work. The interlocking, razor-wire guitars, hyperactive drumming, and characteristically brief compositions remain. The biggest change is in Matt Sweeny’s vocals. While previously verging on a near-falsetto much of the time, he’s now singing in a lower register, delivering lines with an almost classic-rock drawl. The EP is impeccably recorded. The blown-out guitars hover just shy of descent into ambient fizz and the drums sound like wood and metal in an honest-to-gosh room. The raw audio verite imbues the proceedings with a sense of urgency embellished by just the right amount of studio flourish (see the reverbed snare hits on ‘Blank In The Blaze’).

‘The Singer Lied’ and ‘The Bully Boys’ traffic in familiar beefy, off-kilter riffs slathered with spiky, vaguely eastern guitar lines and the occasional guitar-slinger solo. They lurch from seismic shifts to pummeling climaxes. ‘Blank In The Blaze’ is more meditative — all tension and no release. The song’s starts with gentle Byrdsian riff that gives way to a calm shuffle and plaintive Sparhawk-esque vocals. The song’s slow build is interrupted by a trademark Chavez feedback break hinting at a maelstrom to come. But such relief slips away as the song settles back down. Rising distortion eventually evolves into a brief wall of wiry guitar figures, spastic drumming, and an absolutely majestic vocal refrain before fading out.

Both Matador and the band are tight-lipped about future touring or full-length plans, but Cockfighters is a tantalizing offering and a glimpse of what might be to come. Recommended.