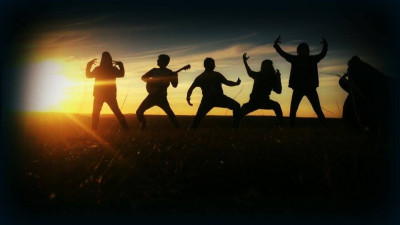 We actually wrote and recorded the music in our garage during very dark and freezing evenings. All we had really was a few laptops to work on and USB-audio interfaces.

Metal music has found its way to remote parts of the world, but rarely to ones so isolated as Yakutsk. Yakutsk is the capital of the Sakha Republic, an autonomous region of Russia that covers about as much ground as India, but has only one million inhabitants.

A thinly populated region, covered in ice and snow, and inhabited by the Sakha people gave birth to the band Hounds of Bayanay. Modern technology allows the band to create music an unleash it onto the world, but it’s really a complete DIY mentality that the group has. But what a place to make metal music. A land so heavily under the elements, with a people that live far away from any real bustling region.

In a way that is something you can find in the sound of Hounds of Bayanay. They’re eclectic and unique, finding their own sound in the city of Yakutsk, which has virtually no music industry present to speak of. Listening to bands they love, they created a sound so distinct that it truly represents their place in the world. Guido Segers was fortunate to get in touch with the band and have a chat about that.

(((o))): Can you kindly introduce yourselves and your band? Where does the name Hounds of Bayanay come from?

Hounds of Bayanay: The band has been in existence since 2014, when Alex Yakovlev ‘Red Hat’ (rhythm guitar), Gregory Grigoriev ‘Klath’ (drums) and Slava Sivcev ‘Sleeva’ (bass/vocals) decided to start a ‘Sakha’ ethno-metal band. The previous band, Fahrenheit, had collapsed. Vocalist Aina Egorova ‘Keres’ and solo guitarist Michil Mekumyanov ‘Chillet’ joined the band as well and so Hounds of Bayanay was formed.

About the name, it may sound a bit silly but it started as a joke. Imagine how the media would call a Sakha terrorist group? But the name sounded hilarious and bad-ass at the same time. Bayanay – in sakha mythology –  is a spirit and master of nature. He is considered the patron of hunters. The Cult of Bayanay still exists today and hunters in Sakha still pray to Bayanay to ask for favor before the hunt. Though our songs and music are not about Bayanay and the hunt themselves, it connects us to the themes of mythology and folklore of Sakha. Legends and forgotten tales of our people and the greatness of the northern nature.

(((o))): How did you guys get into making metal music? What bands originally inspired you to make this sort of music?

Hounds of Bayanay: Each of us have been listening to metal since we were young, but our inspiration is very different. Bands like Metallica, Nightwish, Behemoth, System of a Down and even The Red Hot Chili Peppers are part of that inspiration.

Yakutia already had many folk bands since the eighties. An example is Cholbon, who are considered the Siberian Pink Floyd and had success in Russia. The band has even been on a world tour. In 2003 a band named 103 emerged as the first folk metal band. They are huge in Yakutia now.

(((o))): What are your inspirations for starting Hounds of Bayanay and choosing the lyrical themes you have picked? I find when listening to the music, that there’s a unique, ethnic element to your sound. How did you shape that?

Hounds of Bayanay: What we wanted to create is something heavy, dark and wild, but at the same time it must contain chanting and feel festive like old Sakha folk songs and shaman ritual chanting. The band 103 was a huge inspiration, but we wanted something with more aggression, more blood and gore. The lyrics needed more pathos and mysticism. I suppose that through this our band was born.

In 2016 we started to find out that our music was not only beloved in our native Yakutia. It was then we started to connect and communicate with people from abroad, who loved folk metal music. They told us to spread our music even further. We had been playing live shows in our home town mostly. We were playing new songs at gigs and recording was put second. In 2016 we had also changed some band members. Before we didn’t have big plans, but that changed everything. We had a goal to record our first album, so that’s where we started on our EP MYYC.

(((o))): You’ve released your EP MYYC. Can you tell us how the writing and recording process looked like? What sort of facilities did you use and what sort of process do you take in making your music?

Hounds of Bayanay: We actually wrote and recorded the music in our garage during very dark and freezing evenings. All we had really was a few laptops to work on and USB-audio interfaces. After recording the vocals and the guitars, Alex and Gregory made the other music stuff.

(((o))): I find, when I listen to your music, that in there you have something rather unique, it feels very ethnic and different. Are there specific bands that you feel inspire your folk metal sound?

Hounds of Bayanay: The band 103 might be the closest inspiration we have.

(((o))): In 2016 you’ve not just released your EP, but also dropped 2 demos. What was the motivation behind unleashing so much material in such a short time?

Hounds of Bayanay: Well, one EP and two demos… We’d do more if we had the time for it.

(((o))): On Metal Archives your lyrical theme is listed as ‘Yakut folklore’. I find that this otherness, this different cultural background is very tangible and strongly expressed in the music you’ve been making. Can you tell us a bit about that Yakut folklore, what is it about, what sort of elements return in it?

Hounds of Bayanay: Yakut folklore is based on the pagan beliefs and the epos “Olonkho”. Briefly described, there are three worlds: Upper, Middle and Lower. All of them is connected by giant tree “Aal Luk”. The upper world is world of Gods “Ayii” (????), the ,middle world is settled by humans and the Lower world is full of demons “Ajaray”. In the epos, often, demons capture woman and the humans then will have to send one of hteir legendary heroes to rescue her. The hero will ask for the help of the Gods and must succeed to protect his people.

There also some more realistic folklore of Yakutian people. Folklore of forgotten times when vast clans and tribes waged endless wars, powerfull shamans who gathered armies to destroy other nations and heroes who fought and sacrificedthemselves for justice. All of this is inspiring to many poet.

(((o))): Do you also put something Yakut, something typical, in your music?

Hounds of Bayanay: Sometimes we put throat singing and we sometimes use the Khomus (something like jew’s-harp).

(((o))): You’re making music very far from Moscow, far from any place commonly known as a centre for metal music. What is it like to make this sort of music in Yakutsk? Are there venues, record shops, studio’s and rehearsal spaces there? Do you lack any means to make music?

Hounds of Bayanay: Yakutsk is a relatively small city and if you take a look at the map you’ll find that it is positioned in the middle of non-settled lands. Most of these lands are covered with snow and ice. This means we lack the professionalism in metal, we have no specialised sound people, there are no huge stadiums or arenas filled with metalheads…

What we do have are talented musicians. People with a will to create something original. We have willpower and it seems like we’re slowly getting something done. The population is not huge here, so there’s also no big amount of metal heads. There are no venues, no record shops, no studios and no rehearsal spaces. All we have is unbreakable enthousiasm and metal unity.

There are atleast two or three annual music festivals for bands to perform at. Gigs are organised in local bars by enthousiasts and musicians themselves.

(((o))): What sort of scene exists where you are from, are there other bands you think people should check out? That you’d recommend (and why?)?

Hounds of Bayanay: People should check band 103 they sound very hard and very folklorish. Just check it out!

Hounds of Bayanay: For now we are fully concentrated on recording our first album this year, it already took long enough now.

(((o))): If you had to describe Hounds of Bayanay as a dish (food) what dish would it be and why this particular one?

Hounds of Bayanay: If Hounds of Bayanay was a dish it would be elk cooked in a cauldron on a campfire. It would be a sign of Bayanay’s blessings after a hunt, when the hunter can reward himself with this delicious meat and drink some kymys. It is the real happiness for a sakha hunter: campfire, smell of cooking meat, taiga which surrounds you and not single soul for hundreds of kilometers.