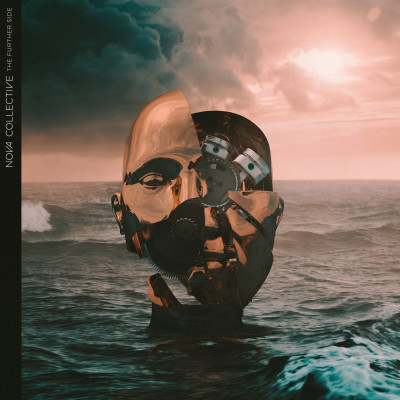 The Further Side by Nova Collective

For progressive rock/metal fans, the bands Haken, Between The Buried And Me, and Trioscapes evoke thoughts of mastery at their craft. And the thought of taking members from those projects and forming a “supergroup” is a mouth-watering concept. So when word came along of such a union, the prog world couldn’t wait to sink their teeth into the end result.

2014 was the year that initial work began on the very group in question, Nova Collective, with the primary work and demos being formulated by bassist Dan Briggs (BTBAM, Trioscapes) and guitarist Richard Henshall (Haken). Drummer Matt Lynch (Trioscapes, Cynic) and keyboardist Pete Jones (ex-Haken) rounded out the finalized line-up to complete the writing of the debut album The Further Side.

With this much talent involved in one unit, I was chomping at the bit to hear what the quartet came up with. Six songs clocking in at almost fifty minutes gives you a good idea of how expansive the music can be. ‘Dancing Machines’ is the opening track, and true to the title, dancing keyboards start us off, with guitar syncopation that leads into bombastic drums and bass. Each instrument is contributing to the main theme of the song, but they’re all able to shine in their own respective ways. This song moves around from super technical and dominant to a more slowed down and even pace. All in all, it’s a great start to the album.

‘Cascades’ gives us acoustic guitar chords with light bass tones and piano to fully propel the vibe, with beautifully accented drum patterns. The pace goes more upbeat and we’re treated to a beautiful fusion vibe which is light and airy, but with a bit of a punch for good measure. If you like your prog a bit more laid back for the most part, then this track is perfect. ‘Air’ takes on delicate keyboard tinkering to open up the song, which develops into a subtle funk. We range from Asian-style interludes to atmospheric keyboard based runs. Interesting rhythms here.

‘State Of Flux’ keeps the momentum going, and I find it interesting that Lynch turns to double-bass drums in the beginning of the song, which came out of left-field for me, but it’s different so I can appreciate it. ‘Ripped Apart And Reassembled’ has really cool robotic keyboard parts which gel incredibly well with the demented time signatures found within. It’s noodly as hell but really interesting. As far as an involved technical piece goes, I’m glad this is the shortest song on the album because I wouldn’t want to see this type of display go on for an overly long period. It fits perfectly with this time frame. There’s also a cool 80’s backdrop to the music. And the title track works well to finish off the album by continuing their winning template and painting exciting pictures with their instruments.

It’s almost impossible to delve into all the subtle nuances of each song because there’s so much going on. Having said that, don’t let that fact make it seem like these recordings are a scattered mess, because they aren’t at all. Each song straddles a main theme and looks to expand on it in every way possible with incredible musicianship and microscopic attention to accuracy and detail.

To put it into general terms, this is like a modern take on the classic jazz fusion and prog heavyweights of the 1970’s. It’s reminiscent without veering into copycat terrain. It’s almost like building off a tribute, with a new and modern approach making this type of musical expression relevant as hell in the modern era.

Perhaps my only complaint would be that Briggs bass work isn’t put front and centre in any capacity on this album. All the other members get time to showcase their respective instruments, and I would’ve loved to hear a technical bass run at some point. But if that’s my only negative thought, then I think they’re doing excellent presentation wise.

It would be impossible to think that with the history and talent of all the band members that this project wouldn’t equate to anything but pure genius, and that’s just what we receive.