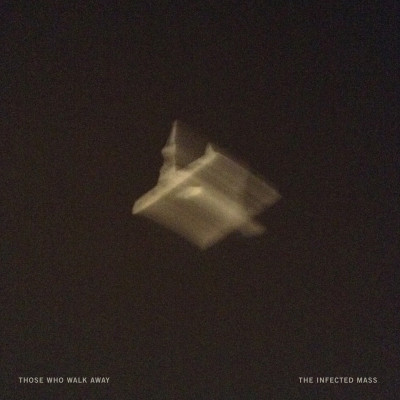 The Infected Mass by Those Who Walk Away

Sometimes creative works come along which you see, watch, hear or whatever, and you perhaps know instinctively from the get go that this is going to be a particularly arduous and difficult journey to undertake. One where the emotional resonance is so intense that you feel an anticipation rising inside your very being, of which is slowly manipulated by what you are experiencing. The first album by composer Matthew Patton, released under the moniker of Those Who Walk Away is one of those experiences, one which has expressed the exact notions and intentions of the artist in such a perfectly beautiful way that it is almost impossible to describe what has really been experienced.

The Infected Mass, the first album released under this moniker, on paper reads as an incredibly difficult album to digest. Utilizing drones sourced from humming, human voices and blood-flow, off-set by ghostly and ethereal orchestral passages and excerpts of airplanes cockpit recordings in horrific distress, the whole album experience is nothing short of an artistic journey that captures you with a vicelike grip and places you right into the source of all the tension, fear and panic. Even on paper, this album seems incredibly difficult to get one’s head around, and when one makes that choice to leap in, the result is an album that creates such an incredible and indescribable impact.

Normally when reviewing, each album is listened to multiple times, in order to digest each detail and try work out what is happening. The Infected Mass doesn’t require any repeated listens. This is a work that is incredibly daunting and moving that I simply don’t have the courage to listen again. The work itself is so minimal that every single minute detail becomes punctuated, creating a truly unique experience. The use of drone techniques sourced from hums and blood-flow feel like deliberate techniques to place us in the front seat of Patton himself, who seems to be dealing with something that is beyond even him, translating it all into this musical odyssey.

It has to be said, that the use of recordings of airplanes in distress feels almost perverse, something that is truly difficult to understand. No doubt Patton has his reasons, and after hearing The Infected Mass, it perhaps starts to make a little bit more sense. Listening to this album seemed to put me in his own head, translating his own thoughts and understandings through his own artistic creation. It is a truly powerful experience to truly immerse oneself in, and one that feels completely unforgettable. There’s something bigger than Patton being dealt with here, something that can’t just be expressed with mere words.

Each element utilized on the album feels incredibly deliberate and meticulous. The drone elements seem to force the listener into the head-space of the artist, whilst the ethereal and beautiful string sections feel like requiems for the horror and terror being expressed in the field recordings. Nothing seems to be done in bad taste, and instead is an incredibly moving and haunting piece of work that perfectly expresses exactly what Patton wants to express. It’s not a journey I feel like I could take again, but the artistic vision and integrity has resulted in something truly unforgettable. When listened to, and absorbed as a whole, we can begin to understand why Patton has undertaken this creative process, and why it is something that is important for him to express. It is perhaps one of the most difficult albums I have personally undertaken the choice to hear, and maybe I’m the only one who finds it difficult, who knows? All I know is I don’t regret the decision.