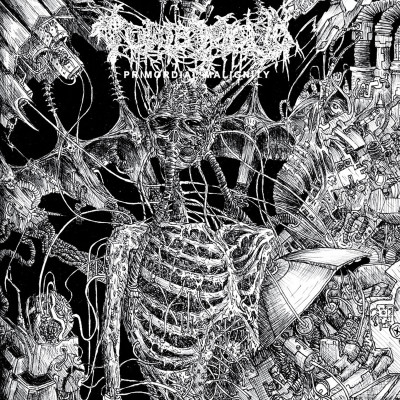 In case you missed Blood Harvest’s reissue of the filth ridden The Bottomless Perdition tape last year, Tomb Mold are a death metal duo base out of Toronto, Canada who barely a year later are releasing their full-length debut. I’ve digested enough death metal at this point to know that I seek material that’s suffocating and overbearing from start to finish; the debut tape did just this, with its cavernously raw production and grating instrumental work. It’s no surprise the band are now within one of death metal’s finest Swedish record labels, and Primordial Malignity provides a more than fitting addition to the label’s output.

The album features an upgrade in terms of production, but at no cost; all this proves is the band’s alluring quality was wholly in the ability to forge excellent, lo-fi, old school death metal tracks. Channelling the degrading grime of bands like Autopsy and the Swedish death metal scene only provides the rotten backbone of Primordial Malignity, as Tomb Mold can hold your head under the hot tar in their own way.

The guitar and bass work of Derrick Vella are instantly defined on ‘They Grow Inside’, with pulverizing bass and guitar rhythms being throttled by a web of twangy guitar leads that sound utterly deranged. The erratic contrast between thundering riff work and these guitar leads compresses the whole track into a tightly woven assault. This carries over onto standout cut ‘Coincidence of Opposites’ where the unhinged riffs lash out throughout the track; Max Klebanoff’s vocals are guttural and uncompromising, essential when cutting through the maniacal instrumentation. Despite that this a debut, in only two tracks Tomb Mold sound completely assured of their unique qualities and are never afraid to abuse it.

Each track is its own monstrosity, with their signature sound running consistently throughout as to not deter the solid, decaying mass of the project. With a half hour run time, it’s difficult to leave it alone upon first listen, as various instrumental chasms drag you back to certain tracks that have managed to worm their way into your limbic system. The spiked guitar melody in the center of the title track and the maddening drum and guitar refrains throughout ‘Clockwise Metamorphosis’ are evidence of this, continuing to engage the listener whilst choking them in the chaos.

Given the continuous front to back play through I’ve given this record, it’s safe to say there’s more than enough in this blistering and ugly chunk of death metal for fans of the genre. One of Tomb Mold’s greatest achievements here is the ability to drop the coarse production of their original tape yet maintain a totally organic sound; organic in the sense of toxic spores erupting from an unopened rift. Quite simply, this is my death metal record of the year, and I’m more than anticipating this project’s future.