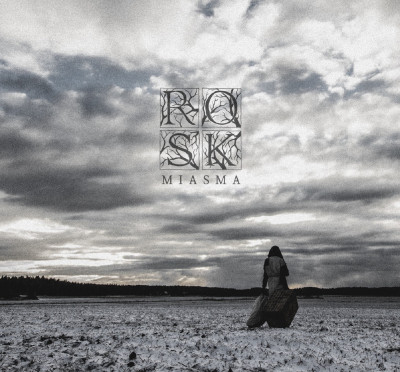 I have to admit the PR blurb for Rosk‘s debut effort Miasma, “We should play music to which people would want to hang themselves” did grab my attention somewhat, well that and reminding me of the Bill Hicks skit about playing records backwards. Happily though, even whilst listening to the stunning piece of work that is Miasma for a few weeks now I have not contemplated looking for rope in the shed.

Although the band’s debut is only four tracks, it is more album than EP, the last track exceeding 20 mins in length. This album does require some patience and attention, it is an epic piece of work, especially considering this is their first output. This is not an album to dip in and out of, the tracks reveal more on subsequent listens.

The band is comprised of six members, interestingly only referred to, what I presume is their first initials. In places they could easily have double the members, such is the depth and complexity In places. Opening track ‘In Nomine Pestis’ starts with building soundscape with synths and strings it is atmospheric, with almost movie soundtrack feel to it. Vocals, deep, pained and grating. Instrumental background remains melodic, building in layers, several guitar tracks and a prominent bass line. About two thirds the way through the songs merges into a distinctly heavier mood . It still retains the depth and complexity, resisting the urge to fall back in a black metal cliche. As soon as the track builds it falls away.

‘Infected I’ blends into the first track in it’s feel but has a much more mellow and forlorn feel. Simple slow guitar riffs and clean vocal. As in the previous track it builds and develops into to a heavier and somewhat epic section. There are hints of post-rock/metal in the band’s songs along with some atmospheric and heavy/black metal used in places. A mix of clean and dirty vocals are used throughout, to a good effect.‘Infected II’ is similar in sounds and structure. It uses a bluesy-slide guitar with distant sounding, echoing vocal harmony, punctuated by a punchy splash cymbal. The long, distorted open chords add to the almost bluesy feel. The song, as in previous cases, develops into a wall of sound. Some patience is used here, the build is slow and deliberate, nothing is rushed or overdone. In this case, the song does degenerate into a frenetic, chaotic mass of brutal noise in parts.

Miasma can be a hard listen in places, it’s brutal, edgy, and in places has an uncomfortable feeling. It’s somewhat hard to know what is going through the minds of someone creating music like this but senses, of frustration, hopelessness, formlessness and outright a unabashed anger is all brought out here. I think that’s where that opening line of the PR comes out.

I do feel that the tracks on this album are somewhat arbitrary, it could have easily have been one long piece of music and is certainly enjoyed better that way. The production quality and mixing is excellent, such is the nature of this music that parts could easily be lost in the mix, but not in this case. Musicianship and talent of the band members is great, despite being a six-member band it is balanced and cohesive. When each of them is really pushing it the effect is stunning.

This is a standout debut from Rosk, unforgiving, brutal in places, serene and atmosphere in others. It demands attention from the listener, this attention is rewarded by being taken through a range of emotions and feelings and some interesting soundscapes. A whole range of adjectives came to mind when writing this, it is probably far better just to listen. Probably best not to listen this in the midst of a messy divorce or a similar down period however.