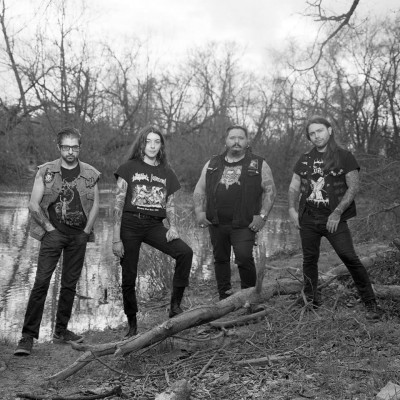 There's really no theme. It's a pretty personal record for me.

Austin, Texas based death metal band Sigil just released their first full length album, Kingdom of the Grave, which was reviewed by Kara Chavez for Echoes and Dust. Kara thought it would be cool to get to know them a little bit better. Here is an interview that she did with Alex Citrone of the band to talk a little bit more about Kingdom of the Grave.

(((o))): Let’s talk about how this is Sigil’s very first full length. That is super exciting for you guys! Can you talk a little bit about the writing process? Is it a mix between you and Andy?

Alex: Really the album had been written by me and Jeremy before Leda and Andy had entered the picture. But Andy’s entrance for sure saw some big changes, particularly on leads, backing vocals and guitar harmonies. His touches are the icing on the cake for the record.

Alex: There’s really no theme. It’s a pretty personal record for me. It’s a mish mash of subjects. I discuss my views on politics, depression, addiction, suicide and the occult.

(((o))): What were some of the challenges you encountered while writing/putting out this album?

Alex: The demo process was a nightmare and we lost two days’ worth of material due to a digital meltdown. That set us back for sure. I nearly lost my shit. I don’t think I’ll ever record my band’s own material ever again and I went to school for audio engineering. The recording process went surprisingly smooth though, thankfully.

(((o))): Some interesting parts of this record are the church bell on ‘Death Unreal’ and the viola on ‘Kingdom of the Grave’. Can you talk a little bit about incorporating those instruments into the album?

Alex: The church bell was honestly just pulled from a WAV found on a free-to-use collection on the internet. Pretty boring story there. The viola was written, arranged and recorded by Eva Aldridge from Dead to a Dying World. I wanted something eery to open up the title track and felt that something symphonic would give it that feel. I think there’s about 8 different tracks of her playing to give it an “orchestral” feel.

(((o))): What was some of the other bands you were listening to while you were writing this album? Who influences you?

Alex: Entombed always and forever. Entrails was the band that pushed me to begin Sigil though. They’re an older Swede-death band that reformed recently and has been releasing absolutely killer material. Any of those old Swedish bands, Dismember, Grave, etc.., were big influences. American d-beat like Tragedy, His Hero is Gone and From Ashes Rise we’re equally as influential for us.

Alex: We recently had a few personnel changes and we’ve been working to get everyone up to speed. As soon as we’re ready, we’ll be playing out regularly and plan on touring in the late summer. Stay posted!

Sigil’s Kingdom of the Grave is out now. Check it out and be sure to keep an eye out for Sigil coming to a town near you! You won’t want to miss their live performance!