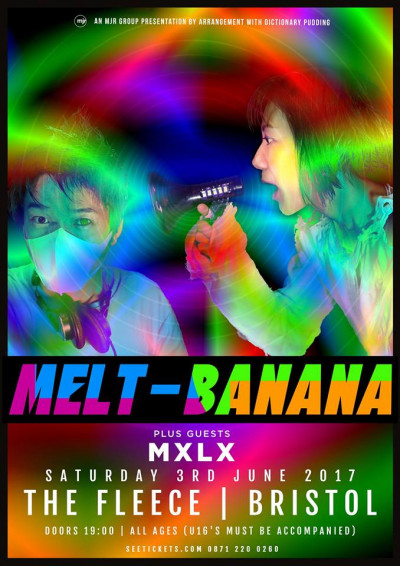 To Bristol then, gentle reader, on a warm early summer’s night to see one of Japan’s finest underground music bands – the legendary Melt-Banana – taking the stage at The Fleece, an equally legendary venue that is to The West Country what CBGBs was to NYC.

Here in, the freaks, misfits, weirdos, and wurzels of all descriptions shuffle about on the beer-sticky floor, weaving in and out of smoke-machine sticky mist, or gathered in ominously sticky clusters. In fact the audience is really diverse, amongst the obligatory black metal T-shirts (which I can never read) I spot a well-dressed middle-aged couple, preppy looking students, old stoners, some crusties, a couple of ordinary looking dads, and a fair mix of folks from across the ethnic and gender divides. This is totally unsurprising for a band like Melt-Banana whose appeal smashes through any artificial genres which you’d care to create.

By the time your intrepid reporter arrived, and had his hand stamped with a picture of a guitar in some bizarre initiation rite, the first opening act – Bristol’s own Weeping – were already underway, pummelling us with their particular brand of pitch-black screamo. Pausing only at the bar for refreshments, there was plenty of time to take in these vegan, anti-fascist, pro-queer troubadours. I’m partial to a bit of screamo and Weeping kicked off the evening with a really intense set that didn’t disappoint. It’s pity being that the crowd was rather thin during these early salvos – perhaps they were getting their hands stamped with guitars. More fool them for they missed an excellent set of bleak and bone-crushing misery. Just what the doctor ordered. Although to be fair it was audible a street or two away. I made a mental note – a band to dig into later.

Following Weeping – another of Bristol’s sons – the multi-instrumentalist Matt Loveridge, here as MXLX – took to the stage for a set of harsh industrial noise. Again MXLX was an act new to me, but I was won over quickly by a set that was, for want of a better description, like a danceable Merzbow with death metal vocals. There was also a rather interesting element of risk as the rickety trestle table, more used to floral wall-paper and upon which all Loveridge’s kit was balanced, rocked around precariously under the vast pummelling of aural artillery. We had a shake of hands later, as it turned out we shared a mutual love of Cardiacs, and for that alone MXLX is alright by me.

While both support acts did sterling works on the stage, down to the left, on rather less wobblesome tables we found Ichirou Agata and Yasuko Onuki selling their own merch. These guys are legends of underground music, they really are, and yet they also are so humble, approachable and friendly. While Ichirou was flogging T-shirts, Yasuko sat quietly, rather contemplatively, almost nervously looking around a room (possibly wondering who had or hadn’t got a guitar stamp on their hands). By the time the duo bounded on stage – the mere act of walking on had transformed Yasuko from the former meek retailer into the enigmatic, engaging, and charismatic front-woman that we all know and love.

Ichirou, his surgical mask intact (keen to avoid the effects of smoke-machine sticky mist), blasted into the opening numbers of a set that mostly drew from Cell-scape, Fetch and Bambi’s Dilemma. Surrounded by FX pedals, Ichirou proved himself to be nifty of foot as well as nifty of fingers. There was more pedalling action than Lance Armstrong avoiding a drugs test. Also, in addition to singing, Yasuko controlled the percussion from something that looked either like a Simon (ask your mum) or a PS Vita (ask your son), how she did this is still a mystery to me, but you’d have sworn there was a drummer in the room keeping time.

Without fail, every song hits you like a falling grand piano, leaving you with little time to recover your senses before you are hit by another. The feverish near-capacity crowd bobbed, danced, and weaved, feeding off the energy of the band, which proved irresistible. While the audience made shapes, I reflected that Melt-Banana have become an increasingly funky unit in recent years – they may not seem like a typical funk band but at the core of this unit is a funkalicious groove machine, albeit a groove machine battling to the death with a thrash metal robot, both of which are being sucked through an exploding jet engine. OK – weird description: but somehow it works for Melt-Banana, particularly when most descriptions or superlatives seem wholly inadequate.

We were also treated to some ambient experiments, crowd-pleasing short songs (the band built a reputation on 10-second blasts of noise), and a now obligatory cover-version. I didn’t catch what it was, although I think it was vaguely two-tone in nature, and that I might have heard on Later with Jools Holland, if you were there – and happen to know – drop me a line, but it’s not unknown for this band to cover Blondie, Queen, The Who, all sorts of popular rock. This was, however, an evening for well-loved and familiar tunes to be given a fresh lease of life in a live setting. It’s a visceral experience to see this band in action and have them bludgeon you into submission – and we were more than happy for them to do so.

Yasuko and Ichirou have a seemingly unbreakable partnership that goes from strength to strength. It’s also a testimony to the group that – even with no new album to promote – the Melt-Banana fan base are prepared to turn out in force to see the people that they love playing the music that they love. With dates all over England, Scotland, and Ireland from now until the end of June you’d be mad to miss them.