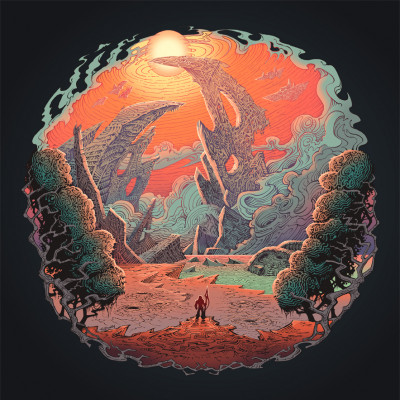 “Dvne (pronounced ‘Dune’)”, starts the press release, and immediately the band have a higher hill to climb. If a press release has to explain to a listener how to pronounce your name because you’ve wilfully used the wrong letter, then it’s not cool or ‘cvlt’ or whatever, it’s just bloody irritating; and it’s going to cause petty small minded reviewers to comment on it, like me. It doesn’t help that I’m grumpily whacking keys on the keyboard in a crappy hotel in Stuttgart while working on a bank holiday – my irritation is twofold. So given my bad mood and the whole ‘v/u’ thing, the fact that the rest of this review is overwhelmingly positive is a minor miracle and testament to the quality on display throughout Asheran.

Asheran is a difficult album to review, purely because it sprawls so far and wide. Musically the band are all over the map, but rooted in the stoner sludge landscape; taking touches of mid-period Mastodon and Baroness, but amping up the progressive tendencies without forgoing big riffs. There’s a wonderful tension between sections too, with a palpable sense of restraint on some of the quiet sections – like the band are holding themselves back for maximum drama – and at the polar opposite end of the spectrum there are some sections where it feels like the band gleefully rush headlong into glorious riffs that seem to tumble forward with aplomb. This tension takes the listener on a pretty intense emotional journey across 60 minutes, and it’s worth every ounce of concentration that the music demands.

The album opens with ‘The Crimson Path’ and a nice bass riff before cracking into the first big riff of the record. There’s an almost middle-eastern flavour to the riffage in this song, which is a nice touch. The 8 minute run time seems to fly past with a huge variety in the sounds on display, between stoner sludge sounds, more progressive driving sections and a lovely solo driven build to the final crushing riff – a section where I very much pulled a riff-face. You know the one, like half way between a gurn and a stroke. The vocals alternate between a gut bothering low and a pitched singing / shouting vocal that is particularly compelling, carrying a huge amount of emotion in the delivery. ‘Viridian Bloom’ follows, with the first two minutes or so an exercise in a gentle and progressive build, layering and gradually increasing in intensity before a cracking blues-y lead appears to usher in a nasty sludge riff and a guttural vocal transitioning into a dynamic riff-y chorus section which feels wonderfully melodic.

The track drops to a quiet synth line which acts as a palate cleanser before the intensity of the opening salvo of ‘Thirst’, all blast beats, tremolo picking and screams, lands hard. This is one of the harsher tracks on the record, but even so there are some cracking progressive riffs and that pitched vocal is used over the chorus to startling impact, driving a more emotional core to a song that could have felt one dimensional in other hands. That is, right up to the mid-point, when the song takes an abrupt change into delicate clean tones, building up gently over the course of a couple of monolithic riffs that reminded of Cult of Luna and Isis, before transitioning into a section that weirdly made me think of Mastodon covering Iron Maiden; melodic twinned guitars and all. It works fantastically well. The harshness of ‘Thirst’ is revisited later in the record with ‘Rite of the Morning’, which has one of my favourite riffs of the year so far; half black metal bluster, half sludge-y doom; but even this evolves into a groovy bastard of a song over its run time.

‘Descent of the Asheran’ feels like the jewel in the crown – it is the centrepiece lynchpin that holds the album together. The song opens with an eerie sample with some acoustic sounds, building a nice relaxed sound with some layered lead, before a melodic riff kicks the song off properly. It’s a piece of music that moves fluidly through lots of structures in its 9 minute run time, peaking and crashing, and never once delivering an experience that is less than spell-binding. Its spiritual successor is album closer ‘Scion’; epic but somehow downbeat, increasing in intensity as it progresses, matching this intensity with a palpable sense of melancholy in the final half of the song. It’s a tremendous song, and curiously powerful, but I’ve been wrestling in my head as to whether it’s the strongest track to end the record, purely because of that curious melancholy. The vocal line over the closing minutes of the album is curiously affecting when placed with the plucked lead line and a Tool-like bass line; and the sudden introduction of big chords at the climax of the song feels surprising and summons goose-bumps almost every time, but the melancholy is such an unexpected emotion it leaves the record feeling oddly unresolved.

One thing is for certain; Dvne have created a true journey with Asheran. It feels narratively strong – even though I have no idea if there is a genuine narrative – and the sheer craft that has gone into the song-writing is evident from the easy flow of the music and the fact that the 60 minute run-time flies by. It’s an album that rewards multiple listens; I’m still hearing new things despite having had these songs on repeat for the last few days. The scope and the scale of the songs are consistently great and occasionally breath-taking and the execution is uniformly excellent. I can’t recommend this enough, and I will be picking up a vinyl copy when the pre-orders come up – I will probably still involuntarily shudder when I see that errant ‘v’ on the cover though.