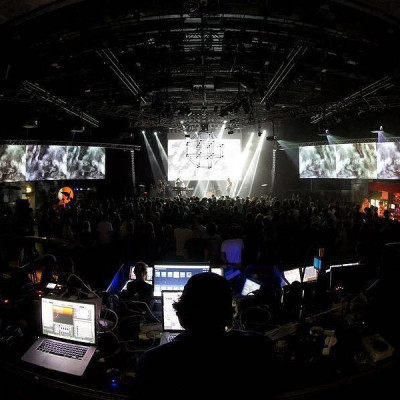 It’s great to be back in Eindhoven, and at Effenaar in particular, for the Eindhoven Psych Lab. This time it is just an evening of music with five bands, as opposed to the two-day festival over two stages that it has been over the previous three years.

On getting to the venue, the guys from The Lucid Dream are already outside in the blazing sunshine, having just arrived. We have a chat with the guys, having been fans and friends of the band for a few years now! As gig time approaches, we enter the darkness that is the main room of the Effenaar, and are met with a wall of electronic noise from the DJ set by Modulab that will be bending our minds before, between and after the bands tonight. 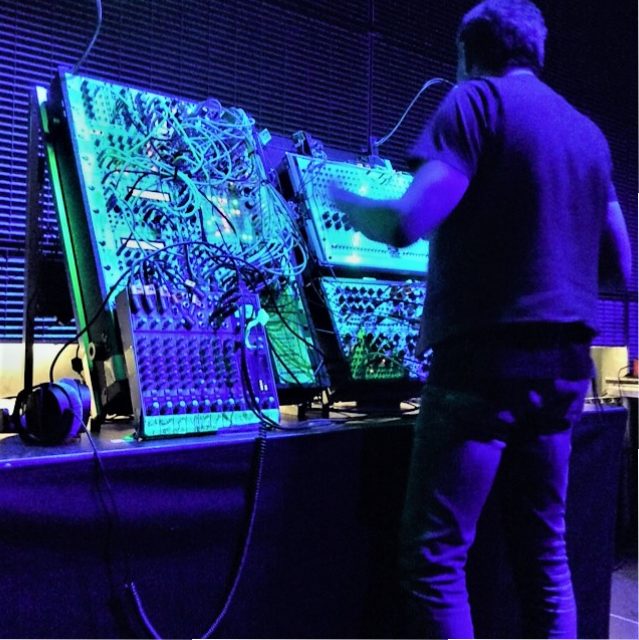 At 6:30pm on come Radar Men from the Moon. Tonight, is their hometown gig and they hit the stage in typical form, easing you into things before exploding into life in the second song, and sounding a lot heavier than last time we saw them last year! It’s semi industrial, and comes over as a Ministry/Nine Inch Nails hybrid.

They carry on with the ferocious assault in a completely new and immense set with an intensity I’ve rarely witnessed. In fact, the first three songs were so new, none of them have been given a title as they were only finished a couple of weeks previously! 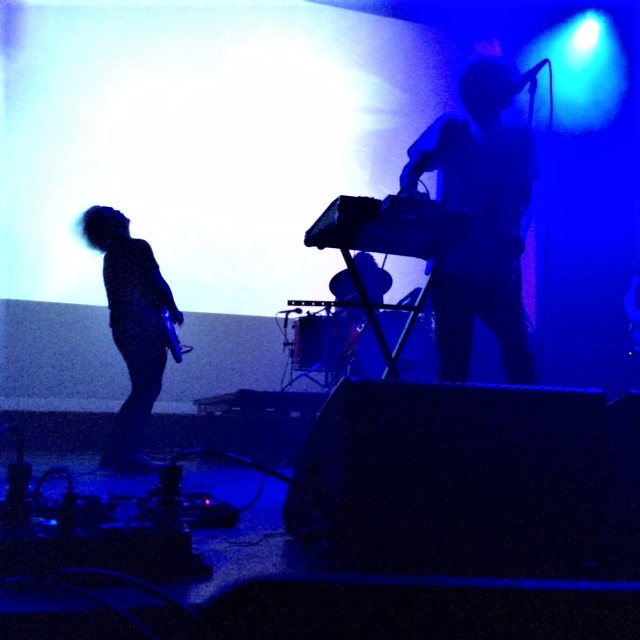 Radar Men from the Moon

Finishing their set with a storming final track ‘Mask of Bees’, which got the assorted throng moving, their incredible set came to an all too soon end, leaving the audience breathless and blown away by what they had just witnessed. These guys are one of the best live bands out there. Do not miss them if you get the chance.

Next up was Carlisle four-piece, The Lucid Dream. These guys have always been a live favourite, and the huge Effenaar venue allowed their big sound to fill the room in superb style. They started off with instrumental track ‘Mona Lisa’ before launching into ‘Bad Texan’, which really got the crowd going. 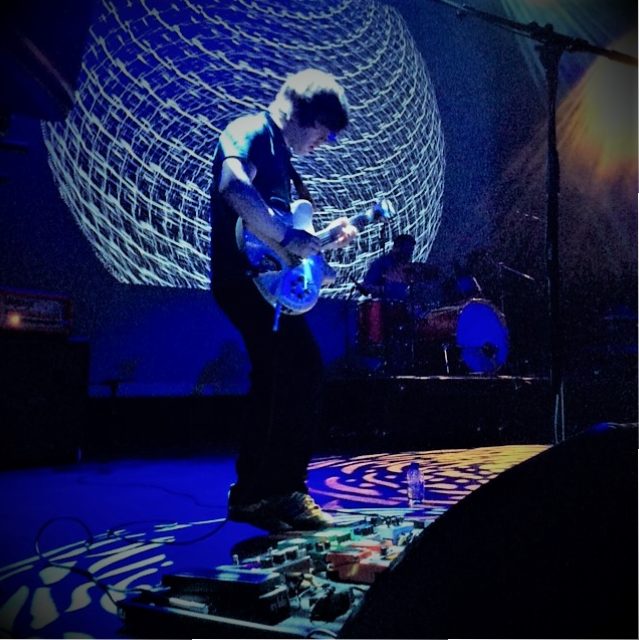 ‘I’m A Star in My Own Right’ followed, off their latest – and critically acclaimed – album Compulsion Songs. Already a live favourite, this was greeted enthusiastically by the growing crowd. Next song was ’21st Century’, a two-minute blaster, before going straight into ‘Nadir’, which had a touch of ‘Hallogallo’ about it to me; and the soaring guitars over it brought it to a whole new level.The final song in the set was ‘Epitaph’, and it was another wonderful slice of Krautrock-inspired psychedelia to finish what was an outstanding set.

TRAAMS were next to grace the stage. I must admit to not knowing too much about them, but the trio made an impressive sound built around heavy drums and a pulsating bass. I wasn’t blown away by the vocals, but the music was pretty good standard rock with a psychedelic edge.

It wasn’t until they had an instrumental break in the penultimate song – ‘House on Fire’ – that I really got what they were about. With big drums and a great riff that saw heads bobbing and the crowd getting very much into the vibe of the band. The final song in their set ‘Klaus’ followed a similar style, which really got the crowd dancing, and TRAAMS left the stage to a huge cheer from those in attendance. 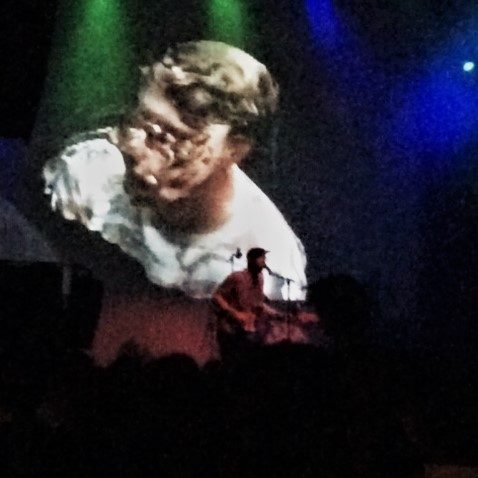 A few years ago a friend of mine gave me a tip off about this Chilean three-piece psychedelic rock outfit, and having searched out their stuff I was suitably impressed! I got to see them at SXSW in Austin in 2013, and despite a set beset by electrical issues, I was hooked. I’ve seen them six times since, and tonight was among the very best.

They opened with a 15-minute version of ‘Electric’; and the hypnotic, tribal, rhythmic drumming and bass lines, and relaxed guitar playing by the blonde headed Domingo, soon had the audience lost in a swaying mass.

Next was ‘Earth’, carrying on in the same vein. There may not be much to look at on stage, but Föllakzoid know that, and use the lighting superbly to accompany the music. It was just a dark blue hue on stage, with occasional narrow spotlights highlighting particular areas on stage and in the crowd. The music is hypnotic, reeling you in with the tribal drumming, the unrelenting bass and then the guitar coming in and out, occasionally soaring, then back to hypnotic mini riffs, before it’s back to the drums and bass working their way into your very being. 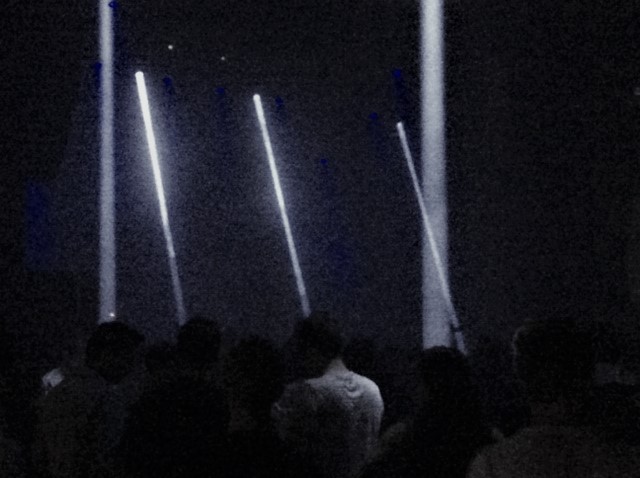 And then there was the 32-minute version of ‘Feuerzeug’ to finish the set – yes, you read that right. The first two songs lasted around 35 minutes, and then we were treated to an incredible 32-minute version of the final track off their third album – III – which only has the 4 tracks on it!The audience were lost as one as they went on their own personal journeys with this incredible psychedelic soundtrack to accompany them.

By the end, people who hadn’t seen the band before were open mouthed with amazement, and those of us who had witnessed them before were blown away by just how good these guys are when they hit a groove. The band got a huge cheer as they acknowledged the audience, and left the stage leaving the crowd stunned. I can only urge you to go and see this band the next time they are in your town, or even playing in your country!

Altin Gün, a six-piece Turkish psych-folk band residing in Amsterdam, were finishing the night: drums, bongos, two guitars, bass, synth and a vocal. The first song sounds Satanic in its way, with a Latin-style rhythm which gets the crowd swaying from the off.

The second track had an Eastern feel to it, as if it was one going back to their Turkish roots. The bongo player was up doing the vocals for this track. Track three started off very rocky, with two guitars, drums and bass, though one guitar was changed for a mandolin part way through. It was up tempo and got people moving even more, but wasn’t really for me.

The next song was again very up tempo, with a classic rock-and-roll beat, but seemed to lack direction in where it was going as a song. Maybe it was because they were following a quite incredible set by Follakzoid, but they weren’t working for me. The crowd loved them though, and were dancing along and the songs were getting a great reaction. 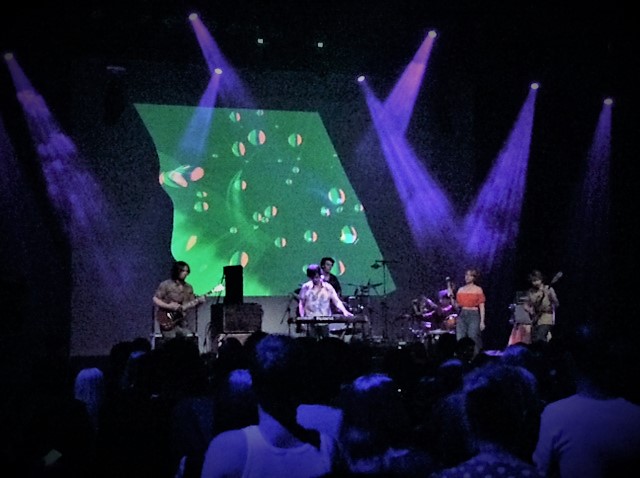 Their penultimate song was the song of the set for me – a great up-tempo track with a killer hook to it that might have come from a James Bond soundtrack! The final track was again a rockier one, with people dancing and clapping, and the band got a great ovation at the end of the set.

All in all a fantastic night, very well organised and with great sound and visuals. There was a 3D interactive image-capture device on the downstairs floor, with all the pictures being incorporated into the music by the talented man behind the visuals, Sam Weihl (Or you may recognise him as that bloke from Bonnacons of Doom) And I even saw my own visage on the big screens – sorry about that!