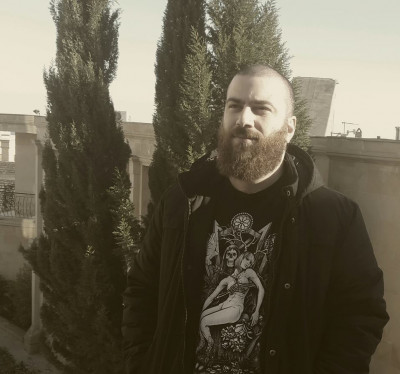 Earlier this year I got to review an outstanding album called Anomie by Violet Cold, project of the universally gifted Emin Guliyev.  Violet Cold has gathered a huge following due to Guliyev’s undeniable passion and creative outpouring of genre breaking releases on his Bandcamp page. Based in Azerbaijan Guliyev has been very open about the struggles of artists in his country and what it takes for musicians like him to follow their dreams. Now, escalating issues with the use of Bandcamp and PayPal in Azerbaijan and certain laws threatening to halt artistic production and the way one receives payment for releases, have made things a lot more difficult. I spoke to Emin about how he will overcome these obstacles and the future of Violet Cold.

(((o))): Emin, where did it all begin for you and Violet Cold, and can you tell us what the origin of the band name is?

Emin: Hi Matt! Thank you for offering me this interview.

I think that everything started long time before the name of the project appeared. The main problem was to find a way to play sounds, which were at least similar to the music that I had in my mind. I made several attempts to play under different names before I decided to use “Violet Cold”. However, “Violet Cold” ingrained in my mind like a lightning bolt, and I can say that it’s not just a set of words, but a phrase that represents my personality and my view of life, i.e. like a trip into the endless cold space.

(((o))): You are a talented self-taught musician who uses a wide range to create the sounds of Violet Cold. What instrument has been most challenging to master and are there any you wish to learn?

Emin: In fact, I am not a musician, because I don’t have music education, I have no idea about music sheets and I don’t know any specific playing technique.

I have a belief that if you are a solo musician, you can’t limit yourself with just one musical instrument. If you try to master one musical instrument, you may become a famous virtuoso, but you won’t be able to create harmonious and balanced music on your own. You will spend your life learning that musical instrument. Your social life, your point of view and even your sense of humour will be focused on that instrument, and your music will be focused on one emotion more than on any other. That’s why it’s really important for me to try all instruments. I want to be like an artist who has a huge variety of paints for his experiments. But I have to say that I really like the tonality of the double-bass.

(((o))): You are a very prolific user of Bandcamp, releasing lots of albums, EPs and singles over the past few years. You also work with many different musical genres, providing an eclectic mix of styles to the fans. What is the genre you are most comfortable working with?

Emin: As in previous answer I will say that I never stop searching and making experiments. My opinion is that one can’t be limited with just one genre. If you feel that you are able to increase the emotional contrast even by a whisker, you have to search for new ways. Sometimes I’m thinking that I’m trying to add my name to the Guinness Book of World Records as the most wide range playing artist.

(((o))): On your Facebook page you recently described yourself as an “introvert”. Do you see Violet Cold as your extrovert-self… as your way of expressing yourself?

Emin: For me, “Violet Cold” is a way to launch a challenge against stereotypes and patterns in both music and life. I like to go beyond the generally accepted limits, surprising people by making something that was considered as impossible.

For example, my very first album was mastered and mixed using only my phone’s headset. So when I saw a lot of positive reviews saying that the sound was very cool and fresh, I was felling a small victory over the system. My main intention is to put the project away from the common standard of a metal band. I hate hypocrites artists who build cloud-castle, which has nothing in common with the real life. That’s why my project will always be really close to the real feelings of people, and my music won’t be unreachable. It will always be near to my listeners, like a tangible friend who will help to create infinite dreams.

(((o))): You create music that perfectly contrasts emotions such as love and sadness. Do you create these ideas from your own feelings and experiences and is there any particular song of yours that you connect to the most?

Emin: I’ll say. The essence of “Violet Cold” consists of emotions, feelings and excitement, in other words of our life. I have no favourite songs from my albums, and to tell the truth, I can’t listen to them for more than 3 days after the release, because new feelings require new shades and I have to switch to the new interpretations generation mode.

(((o))): You reside in your home country of Azerbaijan where laws regarding receiving payments through PayPal have drastically affected your ability to make money from sales of your music. You expressed your annoyance at this and the fact that your main selling platform, Bandcamp, only accepts PayPal. How have you overcome this and what do you think can be done to stop this so that other artists don’t suffer?

Emin: If in case with PayPal it was a problem of the local banking system, in the situation with Bandcamp I can’t see nothing but hypocrisy. Bandcamp market itself as a revolutionary service for the musicians and fans, as a company that breaks all the stereotypes in the music industry, helping musicians from all over the world to reach their listeners without the participation of third parties. However, the real life is different. They know that PayPal allows receiving payment only in 40 countries from more than 200 of them where PayPal works. Nevertheless, PayPal is still the only way to receive payments from Bandcamp.

I think we need to make a petition and send it to Bandcamp, I’m sure that they will change their current position after seeing mass protest.

(((o))): How difficult is it to follow your dream and passion of making music in Azerbaijan?

Emin: I will answer with a short dialogue:

– What is the worst place for living for a freedom-loving and artistic person?

(((o))): You have teased your next big release, a trilogy of albums titled Sommermorgen, which I believe means ‘Summer’s Morning’. Can you tell us what to expect from these and will it be an instrumental album such as Magic Night was or will vocals be involved?

Emin: The thing is that 90% of music that I make is just an image in my head. Talking about the trilogy of Sommermorgen I know only that it’s going to be something really nostalgic, innocent, sublime and epic, but I have no exact details for now. I will put all the puzzles in my head together, and only when I see the final image, I will transfer the sound wave to a physical form.

(((o))): Sommermorgen is expected to be released mid 2018, will the fans be treated to other releases up until then or is your musical focus on recording the Sommermorgen trilogy?

Emin: Actually, I have enough ideas to make releases during the next 10 years, but I am not quite sure if I can keep all of them within the timeframe. But I will make it permanently. When I feel that the quality of music is enough to make a release, I will definitely make it. It can be 1 or 20 releases per year.

(((o))): So far in your musical career what has been your proudest moment?

Emin: I remember when I heard “Alcest” for the first time in 2007. I was thrilled, because that music was not like anything else. It was like a soundtrack to my fairy tales. I always admired Neige as a real musician with a rich and diverse inner world. Recently I wrote him that I would like to make a cover to his song, asking for his permission. He allowed me and added: “I actually really like your project :)”

That was a very special feeling of pride…

(((o))): What does the future hold for Violet Cold? Do you see Violet Cold as a full-time band and could you possibly perform live?

Emin: “Violet Cold” was initially created as a one-man project. That was the main idea of it. In case if I decide to perform one day, that will happen as a part of different band.

(((o))): Is there any way your fans can help support Violet Cold in creating new music such as donations?

Emin: Yes, fans can support the project on https://www.patreon.com/violetcold. No doubt that the project requires financial support in order to achieve artistic freedom, but the will to change everything for the better is more important. There are thousands of musicians around the world who are limited by such companies as PayPal and Bandcamp like me. That’s why I think that this problem has to be solved radically. I think that instead of making donations we can create a petition and catch buzz in society. The musicians and their listeners have to unite and show that their power can change everything.

Thank you for this interview, and for your help in participating of public disclosure of the problems of musicians to the wide audience.

Anomie and other releases can be purchased on his Bampcamp page here.