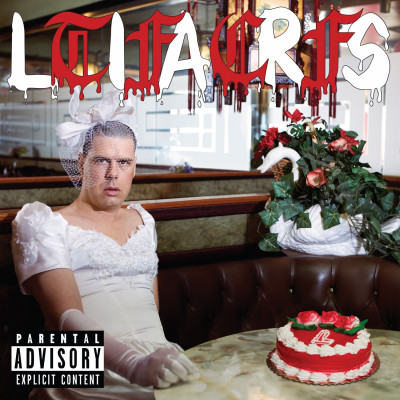 If there’ s a method to the music Australian-American band Liars produce, then it is an enigmatic method that is an effort shifting and changing one. One that let’s itself get thrown down weird and unusual avenues at the whims of a creative muse. The constant experimentation and combination of varying ideas into something cohesive has resulted in some incredibly mind-bending yet wholly incredible album experiences, showcasing the band as one that is always willing to try something different, against anything that life pushes their way. It seems this time round, life has pushed everyone away, leaving founding member Angus Andrew solely at the helm, resulting in another branch of experimentation in the Liars repertoire.

Like pretty much every other Liars record, TFCF (Theme From Crying Fountain) feels like its own point of entry in the band’s discography. The album as a whole feels distinctly Liars, featuring the odd experimental ideas that we’re used to in practice, though utilized in wholly surprising ways. Now that Andrew remains the only one working on the project, it seems he has fully engaged in the creative freedom it has offered him, allowing him to try many different ideas that perhaps wouldn’t have worked in a collaborative effort. The result is a mish-mesh of styles and concepts, acoustic, non-acoustic, electronic and field recordings all interplaying within each other to create an experimental record bound by a peculiar pop sensibility.

What has always interested me about the music Liars have released is their ability to create tracks bound by the typical idea of a song-format, and then letting loose with experimental ideas in order to create something new and interesting. On this latest record, we can see the traditional song structures at work here, but Andrew seems to be constantly pushing it, changing it and  morphing it all into something peculiar and weird, but ultimately something that works. There’s a lot of ideas all packed into TFCF, but it all sounds incredibly cohesive, all structured together into some greater and larger picture that is bigger than the sum of its parts. It seems whereas previous Liars records (in particular, the last release of Mess), we’ve seen the music itself become drawn out dirges of great length; this time we see a much more focused approach to the tracks, with everything feeling much more meticulously crafted and much more direct.

Against what we’ve seen from previous albums released under the Liars banner, TFCF might be a somewhat polarizing release, though this hardly feels surprising when one considers how drastically each album differs from each other. What works here is the emotional core at the centre of the album, one that is showing us a creative talent whose circumstances in life has led him to a point where he is isolated, and working on his own, and the result of all that is this album. It’s a rocky ride, a somewhat confusing one at times, but one that feels utterly engrossing each time one decides to dive deep into it again.  It’s arguable that something does feel lost in the music itself no doubt in part to the loss of band members, but in spite of all that, something else has been gained in this creative process, which suggests that there’s much more to the story of Liars to be seen in the future.