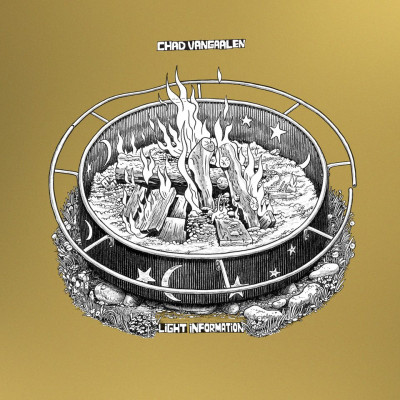 When it comes to singer-songwriters, there’s always been something wonderfully enticing about the lone person, tackling every aspect of their record, rather than bringing in a multitude of writers and producers who all stick their fingers into the creative process, sometimes leaving it a muddled mess. Perhaps my enjoyment of the sole performer comes from the fact that it more often than not results in a truly personal expression of creativity. At the heart of it all for me, is the wonderful work by Chad VanGaalen, whose introspection into his own head has resulted in some of the most gripping, unsettling and downright fun music to come from the head of just one person.

Many of VanGaalen’s album efforts offer wonderfully enticing introspection into one’s head, mulling over the constantly turning and shifting thoughts under various states of being. On this latest album Light Information, many of the same arguably drug-induced existential thoughts still occupy many of the themes, though there’s a sense of VanGaalen considering it all from the perspective of someone who is now much older, with a heck of a lot going on in his life. What truly makes the whole effort phenomenal is how VanGaalen makes the whole concept sounds so catchy and memorable. One may just find themselves joyously singing along after only a few listens, celebrating existential thoughts for all the wonder they provide.

Previous album have offered fairly similar themes and ideas, but the way in which VanGaalen can so effortlessly express these ideas time after time, and create such wonderful and infectious instrumentals to go with it is just wonderful. VanGaalen’s production for his own music seems much tighter than before, which in turn has elevated his content a little further than before. Arguably, the slightly more looser earlier albums held with them a charm which is perhaps lost now that VanGaalen can so easily smooth out the rougher edges, but this new slicker sounding side to VanGaalen’s music brings with it a wonderful sense of growth and movement, showing that there’s more to be explored and discovered.

VanGaalen’s always wonderfully tapped into his own conscious thoughts in his music, perfectly expressing what his mind twists and mulls over. Whilst there’s always been a gripping and catchy element to many of his tracks, it seems none more so than on Light Information, which just grabs us as listeners and throws us into the manic world, where things are dark, mysterious, scary but above all else, just simply fun and enjoyable. Even when things get to their most darkest and scariest, it all unfolds into some of the most sweetest and joyous tracks. All in all, a truly solid, wonderful and memorable album effort that could just become one of his best.