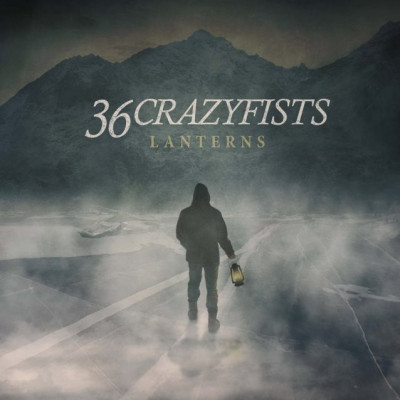 For most people, music is a very personal thing. Whether they are a creator, listener, or both, music is meant to exude or evoke emotion. I’ve written of my own musical PTSD on other forums, and how some songs/albums/bands immediately take me back to a time and/or place. There’s also the case where music can be like medicine, not only for the listener, but also for the creator. This happened to be the case for 36 Crazyfists vocalist Brock Lindow. After releasing their first record in five years, Time and Trauma in 2015, things should’ve been on an upswing. Unfortunately, on a personal level for Lindow, this was not the case. The following year he found himself divorced after 13 years of marriage, working on a salmon fishing boat, at the lowest point in his life. It was here he used music as a tool for his recovery. The results are found on 36 Crazyfists’ latest album, Lanterns, released via Spinefarm Records September 29, 2017.

Opener ‘Death Eater’ may have a Harry Potter title, but the meaning is far from anything in Hogwarts. Starting with a roar rarely heard from Lindow, the song quickly becomes one of the most metal tracks on the record as he screams of a “reflection full of shame”. The band soon falls into a familiar mid-mosh groove on ‘Wars to Walk Away From’, powered again by Lindow’s vocal “Shadowed by these ghosts from death below.” The hooks come out in force on ‘Better to Burn’, soaring in the refrain of “throwing caution to the wind”.

The hook is again prevalent on ‘Damaged Under Sun’, as Lindow bellows “Life lessons fall from the sky”. Even though ‘Sea and Smoke’ brings the tempo down a bit, Drummer Kyle Baltus shows off his chops, as he keeps the backbeat consistent while his feet are exceptionally active. ‘Where Revenge Ends’ brings things way down, as Lindow and an acoustic guitar go it alone. The second half of the album pushes forward with more of the same. Lindow continues to drop line after line on us with every quick mosh and stomping headbang ont racks like ‘Sleepsick’, ‘Bandage of Promise’, ‘Below the Graves’, and ‘Dark Corners’.

There has always been plenty of emotion behind 36 Crazyfists’ music. Songs like ‘Only a Year or So…’, ‘Skin and Atmosphere’, along with many other songs have always hit me with how personal they were. While working on that salmon fishing boat, Lindow surrendered himself to the writing process and embraced its “healing potential”. He and the band not only purge some demons, but use the songs as therapy. Lindow pours his heart into the lyrics of each song on Lanterns, making these their most personal yet.