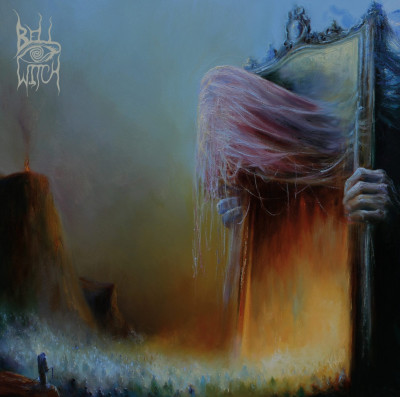 This review for Bell Witch‘s Mirror Reaper comes in a bit late: I’ve had the file for some time, but this 83-minute single track album is that big, it’s taken a bit of planning to even set aside times to listen to it properly… I normally give review albums their first listen on my way to work, but thankfully my commute isn’t this long! Together with the massive duration, it also feels like it demands a certain clearing-of-the-decks to appreciate the scale of the piece. The vast scope is quite staggering and requires you to sort of listen to it from a distance in order to get a view of it- similar to deep chasms of doom by Corrupted, Ommadon, Black Boned Angel and Monarch!. Like grief, you’ve got to let it approach you slowly.

Comparisons with those aforementioned purveyors of album-long strings of sonic treacle do bubble up to the surface… there’s similar tectonic drops periodically through the ice-age stretch of the record, and the dirty vocals sometimes approach a similar hollow slow roar as present in the former and latter. Likeness to maybe the greatest doom metal avalanche riff drop all time, the one that obliterates ten minutes of sombre harp in Corrupted’s El Mundo Frio, is achievement enough, though this has a slightly different feel- where that album is austere and severe, this one has a more desolate, numb feel. The full-on distortion sections even feel somehow comforting and massively crushing at the same time, due to the harmonics mixed in with the blasting open riffs.

If forced to, I could probably manage to take out ten minutes or so somewhere between the 50 and 70-minute marks, where there’s a lot of the cleaner, ever-so-slightly croony vocals not unlike those that have made Pallbearer so popular (though here they’re still somehow muffled, fuzzed out in a pleasing way). I tend to prefer my doom vocals rough, opaque and so low in the mix as to seem like subterranean cave dwellers, so I’m sure different bits of the various vocals will please different folks.

The organ is perfectly judged and truly enhances each section in which it’s ominously present. There are no blasting entries from the instrument, but restraint proves all the more powerful in this case as sound seeps in unannounced and then begins to rise like water in the listening consciouness, all gothic statue stillness, pastel fading greys and slow motion heron flight. An excellent feature of the album track as a whole is the willingness, across the expanses of this weird cold desert, to allow lengthy solo passages of hanging bell basslines- would have loved to hear some of the elegaic organ completely on its own too. But minor points aside, Mirror Reaper rumbles on in great numbness yet with forceful emotive power. It really is a tombstone slab of a record, made of granite and sadness.