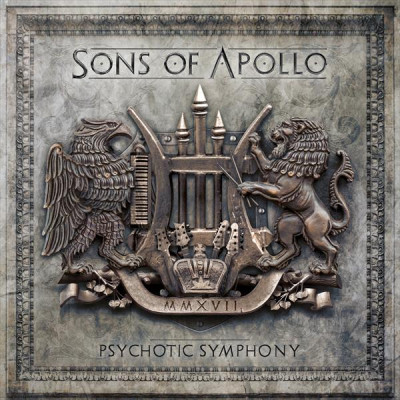 Psychotic Symphony by Sons of Apollo

Falling Into Infinity is one of my favorite Dream Theater albums. Yes, yes DT nerds, I know it broke from their “traditional” sound, but that has a lot to do with why I love it, especially considering how sterile the band sounds now. Anyone who listened to the A Change of Seasons EP should have seen it coming. Many blamed the infusion of keyboard wizard Derek Sherinian for the change in sound. I have no doubt his immediate comradery with then drummer Mike Portnoy had some influence. Many fans were not in agreement with Infinity’s ode to the prog rock forefathers, and by Sherinian’s release after the subsequent tour, the rest of the band was not fond of the change either. Since then he’s gone on to record seven solo albums, as well as be part of other groups, like his current band Black Country Communion. BCC is as much a super group as any other he has been a part of, including his latest, Sons of Apollo, where he is again reunited with Portnoy. They are set to release their debut, Psychotic Symphony, via InsideOut Music/Sony Music October 20, 2017.

If I didn’t tell you who was in Sons of Apollo before I hit play, you could probably guess Portnoy and Sherinian just from the intro of opening track ‘God of the Sun’. Sherinian’s organ takes me right back to Infinity. The same goes for Portnoy’s drums, who’s playing is one of the more obvious in the industry. Portnoy could’ve cut and pasted the entire album from multiple sources of his previous work. The only other drummer that recycles licks as much as he may be Matt Sorum, which is why his sound is so distinct. Over eleven minutes might seem a little long for an opener, but remember, this is a Portnoy band, so we shouldn’t be surprised. It’s also a vehicle for Sherinian’s prowess, as you’ll notice throughout the album that he and Portnoy’s are the primary instruments showcased. ‘Labyrinth’ is similar, but not quite as long. Lead single ‘Coming Home’ is one of the more balanced tracks, letting Thal and Sheehan each solo. After that, you almost forget Sheehan is on the record until the last few tracks if you’re not listening intently. Thal is a little more noticeable, but the solos are still dominated by Sherinian.

Now, if you can get past all that, most of the songs are pretty good! The always solid Jeff Scott Soto keeps Portnoy and Sherinian honest, breaking up the love fest with his classic tone. This guy was Russell Allen before Russell Allen, and he continues to crush it. However, for all his awesomeness, we still get a ten plus minute instrumental to close the album. ‘Signs of the Time’ and ‘Alive’ both remind of one of Portnoy’s other bands, Flying Colors, if they were heavier. ‘Lost in Oblivion’ is a jammer, and one of the more up tempo tracks on the record. Sherinian channels the late Jon Lord on ‘Divine Addiction’, as so many influences are smashed together in one song.

When it’s all said and done, Sons of Apollo is just Portnoy and Sherinian wanting to play together again, and Psychotic Symphony is the result. Soto, Thal, and Sheehan are just there for added flex, as we know Portnoy and Sherinian could’ve gotten anyone to play with them given the right timing. That’s alright, because Sons of Apollo aren’t Dream Theater, but Psychotic Symphony is probably as close to another Falling Into Infinity as I’m ever going to get.