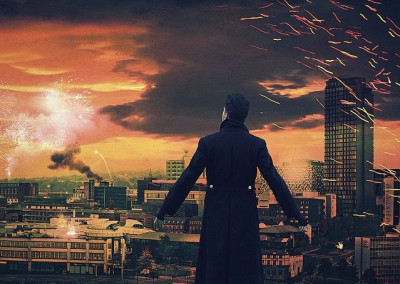 Jon Boden & The Remnant Kings at The Globe, Cardiff

In the very intimate setting of The Globe, the band opened the show with covers of ‘Rosin the Bow’ and ‘The Rose in June’. The latter is a more obscure Scottish folk song, detailing the tragic death of a fisherman in a storm. Though it may not be a hymn, when delivered by Boden and his band with their signature passion, the chorus of “Hallelujah” is almost enough to make this atheist believe again.

This then led into the performance of Afterglow itself, played in full over two sets. Boden’s emotive voice and fantastic stage presence was hugely effective in bringing the album’s story to life: you could almost see the two lovers trying to find each other in the chaos of the carnival. Key highlights included a particularly joyous performance of ‘Moths in the Gaslight’, and very emotive renditions of ‘Yellow Lights’ and ‘Aubade’. They also put in a wistful cover of Whitney Houston’s ‘I Want to Dance With Somebody’, taken from Afterglow’s predecessor Songs From The Floodplain.

Following the completion of Afterglow, the audience was treated to a reworked version of Bellowhead standard ‘Roll The Woodpile Down’, as well as two dancing songs ‘Leviathan’ and ‘Tombola’. The encore took the form of a cover of Kate Bush’s nightmarish ‘Two Steps On The Water, followed by ‘All Hang Down’ from Boden’s first solo album, The Painted Lady. Boden explained to the audience that it was a song written by the Salvation Army as part of their work for the Temperance movement. To the audience’s amusement, he went on to state that it did not work, as those drinkers whose salvation was being sought instead took the song for their own and made it into a drinking song. Invited to sing along with the chorus, the audience did so with great gusto.

That same enthusiasm for singing (the audience being Welsh, after all) was then carried into the “Afterglow Aftershow”. Both with Bellowhead and solo, Boden delights in taking his audience into a nearby pub after the show to perform jigs and reels for the patrons. This time around, we were treated to a hearty rendition of ‘Danny Boy’, but the audience’s singing was at its heartiest during the performance of Welsh folk-song ‘Calon Lan’.

In all, it was a fantastic night of folk music, both on stage and in the local pub. Jon Boden is a singularly gifted musician and storyteller, and I look forward to enjoying many more performances to come.