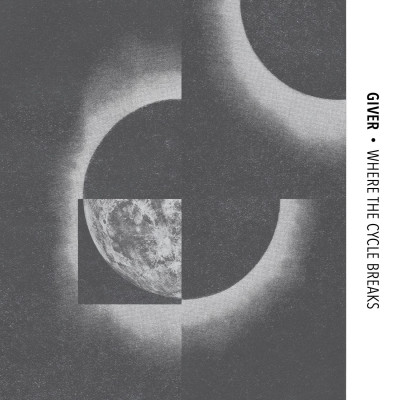 Where The Cycle Breaks by Giver

Having released two EPs before announcing their debut album Where The Cycle Breaks, Giver have bided their time and honed their craft. They play a brand of melodic hardcore that they style as dealing with “passion, sincerity and truth”. Giver has a substantial amount of energy, but alongside that, they can craft enjoyable sing-alongs that look back at their roots whilst always looking to innovate.

The opener, ‘Shock of the Fall’, doesn’t dawdle in its efforts to entertain. After a brief build-up demonstrating some trends of hardcore (pounding drum beats, dissonant guitars, gang vocals) it ups the ante into the speed that is typical of the remainder of the album. The hardcore connotations simplify this music more so than they deserve when they are hugely entertaining in their adaptation of tradition.

‘The Other’, coming in at a brief two minutes long, doesn’t let up to the point where the drummer adopts to blast beats to maintain the power; this addition, in fact, typifies the frustration and aggression a song like this intends to convey. Despite its short length it still manages to change dynamics and closes with a chorus of gang vocals.

‘Dancing With The Devils’ goes through a number of movements in its short span and is certainly one of the albums better songs. The instruments are at their most interesting, whilst the vocal hooks are their most memorable. The song builds on each of its elements, and though it changes pace abruptly at times it is done to the benefit of the song.

Another standout, ‘The Terror Of Perfection’, is placed towards the end of the album, however, it could easily have closed it. Whilst it isn’t the longest on the album, its chorus is more captivating than its siblings, and the song itself goes through many emotional phases. ‘No World To Come’ is similar in fashion. It begins with a slow and moody intro before firing on all cylinders. ‘Pills’, on the other hand, conveys a much darker tone and carried, even more, weight as a result.

The album avoids losing its intensity. Where it isn’t being played at a ludicrous pace, it is asking the audience to scream along. There isn’t a moment where your attention won’t be fixed on something. This is brilliant as not only will it allow you to enjoy the moment, but also focus on the music and enjoy each element. Most of these songs could whip the crowd up into a frenzy, but also provide great listening in other environments. It looks like Giver has released something with class, and got 2018 off to a flyer.