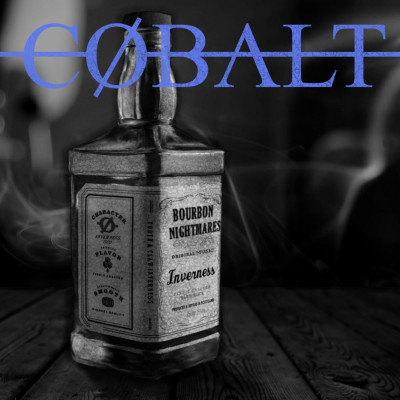 Metal is alive and well in the north of Scotland. One listen to the pure nectar that is Cobalt’s Bourbon Nightmares will convince you of this. Whisky soaked, bluesy, feel-good and joyous, Cobalt make metal as it should be and the end result is nothing short of addictive.

Bourbon Nightmares’ opening track ‘Lights Out’ starts with muted guitar and drums, at which point you will be questioning whether your headphones are connected properly, all is well though as a high pitched guitar squeal suddenly brings the full sonic wave crashing into and over you. Chunky riffs abound along with breakdowns, tempo shifts and melodic passages which demonstrate the multidimensional song writing on show here. The drumming and especially cymbal work on ‘Lights Out’ is damn nice, giving the song exactly what it needs without ever being showy or over the top.

In the next track ‘Warrior’ Cobalt go full metal and, unlike in Tropic Thunder, I entirely endorse going full metal here. The heavy gets turned up a notch and it becomes clear that we’re now onto the main course. I just love this song, plain and simple. The first scream of “I am the answer” is spine-tingling and Craig’s vocals absolutely drive the song, he really knows how to hold back, build and then explode.

‘Martyr’ rears its angry head next, this track is a bar fight song if ever I heard one, and a damn good one too. The bluesy undertones which are running through this record then reach their peak in ‘Lock Me Up’, which I vote should be the title music for any future seasons of ‘Sons of Anarchy’. Cobalt slow things down now, showing a more vulnerable underbelly in ‘Ironside’. Melodic singing sits on top of some very nice guitar passages, demonstrating a new dimension to Cobalt’s music.

The EP is rounded off by the title track, ‘Bourbon Nightmares’. Back to the Americana metal now, thunderous and rolling right up until just after the halfway mark, the track then slows as a central chunky riff walks us towards my favourite solos on the record and the almost inevitable part where I start the whole thing again from the beginning.

Bourbon Nightmares is crazy good, it is fun and it will leave you wanting more. I recommend watching this space because I’m convinced we can expect big things from Cobalt in the future.