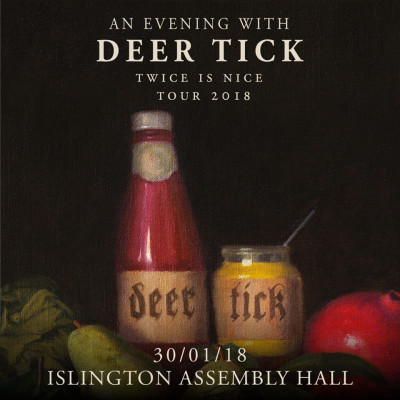 Following on from the 2017 release of the epic, if unimaginatively named, double album Vol. 1 and Vol. 2, American Rock/Folk/Blues/Country band Deer Tick continue their extensive tour and alight on Islington’s Assembly on the 30 January.

Following on from a pretty challenging day at work, I too alight at the Assembly and, being a bit behind on my research, I look around and am taken by surprise by the fact that the stage is unoccupied and seemingly only containing Deer Tick’s equipment. The reason for this, of course, is that in line with the double album, this tour features a double-length Deer Tick experience where the band basically support themselves performing first a lighter more acoustic set, and then returning to the stage wielding heftier “axes” for the electric second half.

Having not done my research, this is all news to me and a very pleasant surprise. A good concept and no doubt adding value for money to the list of positives. On a side, note, it’s also pleasing to see the Assembly serving an IPA rather than just the usual watery wastes of time you normally get to drink at such venues.

As Deer Tick take to the stage, the crowd (seemingly also not 100% up to speed) offer a slightly sporadic cheer; but not fazed in the slightest, John McCauley offers us a warm welcome with bottle in one hand and a guitar in the other before they launch into ‘Sea of Clouds’. The sound as the band begin playing is a little off and the drums are clearly set for the promised electric set later, but some no doubt frantic knob fiddling (pun intended) fixes the issue and while a little surprising, the blip doesn’t really impact the evening.

The acoustic first set is well crafted and with numerous instrument changes from all parties except for Dennis Ryan behind the kit; the songs come across as varied, and the set itself keeps the audience’s attention and appreciation well. Whiling away a little time between songs, I note that the instrument changes and an apparent shyness have left all but Ryan speechless as after the initial greeting and explanation of the evening; the remaining band members say little to the crowd leaving some slightly uncomfortable gaps, and I feel like a little more patter would have definitely made the evening flow better.

Nevertheless, when we do get some acknowledgment from Ryan, it’s appreciated; and he introduces and sings ‘Me and My Man’, the cutesy little love song from a dog to his/her master that to me is one of the highlights of the first half.

The band are a tight unit and the musicianship is excellent from the get-go right through to ‘Mange’, the closing song of the first set and a song with an excellent drum part, leaving myself and the rest of the crowd excited to see what the second set has in store for us.

Hitting the stage straight off with ‘Don’t Hurt’, Set Two’s slightly anthemic start is a good start; and as they move through ‘Jumpstarting’, ‘20 Miles’ (excellent song, played perfectly) and ‘Tiny Fortunes’ among others, the tempo remains high and the two sets keep their definition and separate nature. The one thing that doesn’t lift with the second half is, once again, the stage performance. There’s a bit of movement here and there but with the exception of two clichéd “rock-star” guitar waving occasions, there’s sadly little in the way of show.

Not that that is putting me off particularly as they roll into ‘Look How Clean I Am’, another set highlight, and begin to wind things up. ‘These Old Shoes’ walks them off the stage and the crowd, myself included, not finished with the evening yet cry out for “more”. And of course, we get it.

In what’s actually one of the best pieces of staging of the evening, McCauley returns alone to the centre-spot and the soft strains of ‘Christ Jesus’ float over us. It’s a powerful song with a striking riff made for an encore. I find myself mesmerized like no other time during the evening, and I can feel myself totally sold by this one moment alone. As the song progresses, the rest of the band quietly move into position for the crescendo, a very well-timed dramatic event near goosebump-worthy. As a short set in isolation, the encore works entirely, and whoever in the band chose the arrangement gets extra applause from me.

As the last notes of Billy Preston’s ‘You Are So Beautiful’, the band’s current cover song, slowly fade away, the evening ends; and while a lot more Deer Tick has been had than I had ever anticipated, I find that I’ve had a care-free, happy evening, and I’ll be looking out for Deer Tick to make a return to our nation’s capital, hopefully soon.

I have to say though, McCauley; when you do the opening-a-beer-bottle-with-your-teeth’ trick, it might be best not to use a well-known brand of beer with an easy-open tab cap.