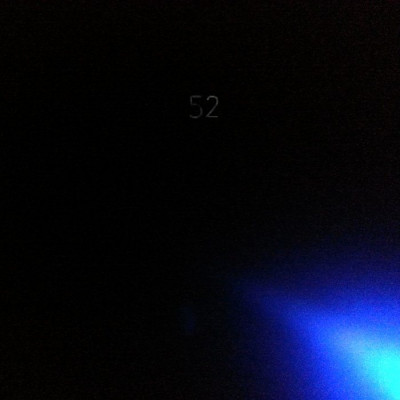 There was a time when I’d get home from school, do my homework and throw Channel 4 on for a couple of hours: The Simpsons, Hollyoaks and the Channel 4 News with Jon Snow and his array of multicoloured ties. I might be wrong but I swear he changed tie during commercial breaks. Anyway, something that set that angsty soap apart from the rest was its use of incidental music, and Martyn Jackson in his soundscapey guise of Orellana has had his material used to accompany whatever sketchy things have happened in Chester of late. More of this, please.

His latest offering 52 is a standalone album that serves as an imagined soundtrack to a film about a lonely whale trekking round the recesses of the ocean, swiping furiously on Tinder, sololashing on the last train home from Tiverton Parkway, that kind of thing. Contextless soundtrack releases are a risk, but this is the reverse as, the predominant stated mission aside, it can represent whatever we want it to. Fortunately this record largely achieves what it sets out to do and shouldn’t remain unheard, unlike its fictional mammalian protagonist.

Explosions in the Sky and This Will Destroy You show their teeth in the first two tracks; ‘Waterbirth’ and ‘Beautiful Youth’ are gorgeous understated piano-driven journeys that would soothe Brian Moore during a rant about Danny Care’s game management. (Richard Wigglesworth really is better, Eddie.) ‘Stay’, however, is more subdued and similar to Max Richter’s recent output, particularly Nosedive. Piano hooks are arguably more readily memorable but I was impressed how quickly I was reeled in.

There are, however, moments when the mood shifts from Blue Planet to a less cetacean paradigm and this is where Jackson is less successful. ‘Still Waters Run Deep’ is somewhat frenetic and doesn’t necessarily fit the overall majestic whaley ambience he’s going for. ‘Perseverance’ is absolutely gorgeous but is so, soooo Death Cab and deserves a heavily-metaphorical lyrical input; Mahesh Raghunandan’s terrific vocals appear on ‘I See You’ but could do with a wider prevalence.

Happily ‘Is That… You?’ delivers what the record promises from the beginning; a ceremonious, sweeping fight song replete with overdrive that wouldn’t be out of place on Low Level Owl. It’s Jackson at his best and a fitting closer to what is a truly lovely record. I can’t wait to see the film.