(((O))) Review: The Low Anthem – The Salt Doll Went to Measure the Depth of the Sea 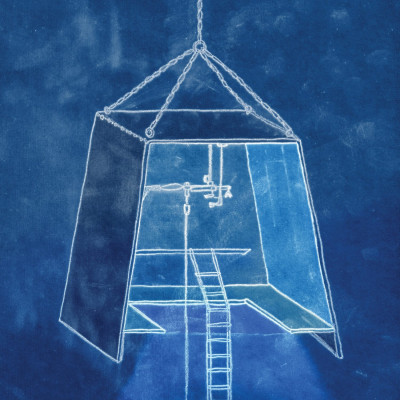 A few years ago there was a brief period where alternative folk had entered the mainstream, giving some respite to the glut of indie-rock bands that were cropping up everywhere. Whilst this period was perhaps short-lived for the most part, there were a few bands that stood out amongst their peers, producing works of surprising substance. Of many of these bands, it is The Low Anthem that I remember fondly, whose albums ranged from gentle acoustic croons to fast-paced rockers, all the while bringing such an element of fun and excitement to their music. After a period of inactivity, 2016 saw the release of the band’s fourth studio album Eyeland, featuring a much more eclectic and experimental vibe than perhaps what they were known for. With the release of their fifth studio album The Salt Doll Went to Measure the Depth of the Sea, we see a wonderful continuation of this more experimental style of the band.

Eyeland saw many changes for the band in terms of their output, which came across as a very experimental effort that saw the alternative folk style being combined with a more electronic technique. It is here though, on The Salt Doll Went to Measure the Depth of the Sea, that we see a true amalgamation of these two techniques of the band. The gentle acoustic folk elements we know from the band are certainly present, though it is combined with electronic blips, beeps and varying other sound effects that add to the gentle and calming nature of the album, even going as far to help present the overlying concept of the album itself, a very nautical story of a doll’s journey through the sea as it floats in and around the watery landscapes to newer stories.

Whilst there was much to enjoy on Eyeland, it seemed that there were a few experimental notions that detracted from the overall experience, showing good promise for the band but failing to really add anything noteworthy. Here on the band’s latest album, the album’s overarching concept has feels much more thought out and meticulous, with each and every technique contributing greatly to the story. The overall effect is a concept album that is gentle and relaxing in its presentation, where the band effortlessly glides from track to track, presenting some of their loveliest and most comfortable music in years.

There’s something that’s just delightful about The Salt Doll Went to Measure the Depth of the Sea. It feels simple in its execution, though features many wonderful surprises and a few memorable tracks that really stand out amongst the band’s entire discography. It’s wonderful to see the band not only producing new music in this day and age, but even going as far to try some experimental ideas and present something of their own volition. For fans of the band, this may be seen as a wonderful return to form, and simultaneously, an advancement of their new style, with the whole album being of a wonderful standard that holds up well amongst their now eclectic and varied discography.