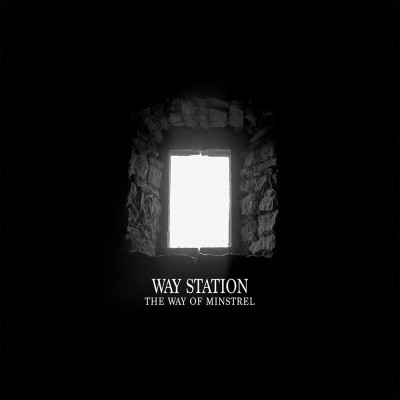 The Way of Minstrel by Way Station

““There is a light and darkness in everything…”” There is probably no better introduction I could give you than these words from Kiev-based band, Way Station, in regards to their sophomore release. The Way of Minstrel sits neatly between the accessibility and atmosphere of post-rock and the funereal qualities of post-metal akin to legends like God Is an Astronaut and Maybeshewill. In a musical landscape filled with cheap imitations and recycled motifs, The Way of Minstrel boldly carves a path for the next generation of hybrid “post-bands”.

Coming off of their first LP, The Ships (2013), and subsequent singles, Way Station seems like a band actively working to mature musically while still holding true to a sound they have obviously adopted as their own. True to form, The Way of Minstrel expands on an already solid catalogue and invites you in with quiet charisma. Like a siren’s song, “Unheard” subtly gathers your attention and guides you to an uncertain destination. Slowly gathering momentum, Way Station lures you through ‘80s sci-fi-esque synth tracks, sleek piano tinkerings and a driving rhythm section to deliver you head first into the beast that is “Clouds Dropped Down”.

Arguably the crowning achievement of this record, “Clouds Dropped Down” never ceases to amaze me. Even after the 20th spin of this album, the sheer weight behind this track is enough to catapult it to must-listen status for me. It may draw from the same aspects that most other songs in the genre draw from (heavily distorted guitars, tremolo techniques, crescendos, etc.), but Way Station’s innate ability to keep the listener invested is second to none. Similarly, “The Song of Minstrel” packs a punch throughout and demonstrates a unique touch of control most bands cannot manage. It may flirt with the notion of being contrived with an overtly puedo-moroccan introduction but such thoughts are instantly disbanded when the band kicks in and clarifies the direction of the track.

While the first half of The Way of Minstrel lends itself to a band confident in its abilities and eager to show that off, it casually loses momentum throughout both “Everything After” and “2MLY”. To be candid, I enjoy the somber static drone-scapes of “Everything After”, but I also realize that the listener certainly has to be in a specific mindset to enjoy it. As for “2MLY”, I cannot credit it with adding anything different to the context of this record. Sure, it is heavy and there are moments of charm I can single out, but, as a whole, the song feels sluggish and lacking of a certain depth I came to expect from the rest of this record.

Fortunately, Way Station recovers with fervor and the final tracks transition us back to what makes this album special and worth note. From the synth laden “I’mpulse” to the battering ram that is “Parallax”, Way Station emotes a poise not normally seen in a band that has only been around for four years. When they dare to venture out from the typical “post” formula, the result is a magnificent collision of beauty and gravity portrayed perfectly by their grand finale. Appropriately named, “Parallax” is one of those songs that is easily loved or looked over, depending on the the context you perceive it through. In my opinion, it connects all of the attributes associated with The Way of Minstrel into an eleven minute epic, resulting in a rewarding conclusion to a paramount album.

Perhaps the quote I opened this review with could be construed as a melodramatic statement from a band trying to feign precocious wisdom, but I will argue that it is a precise characterization of a record destined for greatness. Ultimately, The Way of Minstrel is a can’t-miss record and Way Station should not be allowed to fly under your radar any longer.