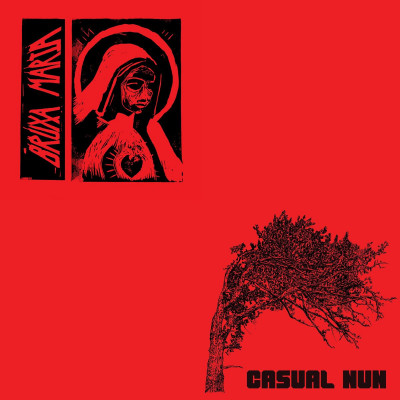 Two of the UK underground’s brightest and noisiest take a side each for a raging split LP. Bruxa Maria play a dynamic blend of hardcore, noise rock and metal that’s familiar, but full of smart twists and turns. This is their first new material since 2016’s absolutely ferocious Human Condition and they keep the standard high.

Coming out spitting and kicking on ‘It’s All In The DNA’s punchy hardcore before taking a sudden swerve midway at the mercy of Matt Cargill’s wild electronics. ‘Rise’ channels some thrash metal moves into a thick swarm of angry guitar, a wonderful, perfectly deployed descending riff beneath Gill screaming “I Want to Riiiiiiise!” it’s fantastic. Their slower, grinding side comes out for third and final tune ‘People Die In Revolutions’. Longer than the other two put together it’s an epic slab of hulking, droning noise.

Casual Nun are more of a wild ‘n’ fried psych inclined proposition. They open their side with an abstract minute’s worth of electrical weather before the band go off like a rocket. ‘The Sweet Hereafter’ is an absolute battery of snares and screams, the space rock of extreme g force, it’s exhilarating stuff. They’re a band who seem to get better with every encounter and once again there’s a small but noticeable step forwards. A fierce and undeniable live act, to me these four tracks are easily the best stuff they’ve recorded so far.

Hands down winner for best title on the EP ‘Easy Now, Cowboy’ rides into town on a chewy repeating bass line that stubbornly holding its own against waves of soaring guitar noise. Pausing for breath and a moment or two’s contemplation ‘Sherry Bell’ is a surprisingly sweet tinkling instrumental. The final track ‘Crane In The Water’ sees them return to their more familiar dirty riffage and churning double drums both dropping away for a wide eyed, spaced out second half.

Bruxa were just recently involved in a nasty van crash on tour in France but are thankfully now well on the way to full recovery. Fingers crossed they’re soon back to full fitness as the two bands are due to be playing some shows together. Not to be missed.