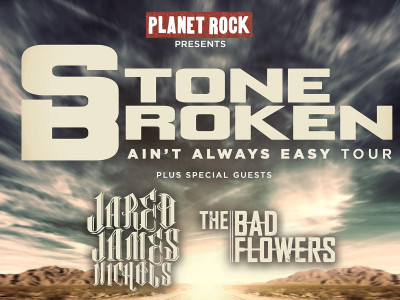 Coming as I do from the West Midlands and having friends who are fans of both The Bad Flowers and Stone Broken, an evening showcasing both in one evening held great promise indeed. Alongside Jared James Nichols, Kilimanjaro Live brought this evening to local haunt Islington Assembly, and if the show’s “Sold Out” status is anything to go by, the excitement for the evening was high.

Having made the leap from local cult following to what has been pitched as a “global” deal with Spinefarm Records, this 12-date tour coincides with the release of Stone Broken’s second studio album: Ain’t Always Easy.

The evening was opened by The Bad Flowers, a trio of (in the band’s own words); “Lead vocalist and guitarist, Tom Leighton, whose riffs, fuzz emotive guitar and pure vocals have distinctive sound unlike anybody else. Bassist, Dale Tonks, provides a deep heavy groove and tasty bass runs that under pin Karl Selickis’ chest pumping drums and impeccable feel.” And I have to say, I agree with those sentiments. The Bad Flowers were an energetic, engaging start to the evening and far from forgettable. Often, support bands can be overlooked but The Bad Flowers had the crowd firmly on their side and were met with a (well deserved) positive reaction.

Following the heavy blues/rock Flowers came Jared James Nichols. On first reading the line-up, I must admit that I’d assumed that Nichols was a solo artist who would be opening the evening but in fact nothing could be further from the truth. Another power trio took to the stage ably fronted by Nichols himself on vocals and guitar. The sound this time had a slightly more 80s’ hard rock feel to it and less of the bouncy catchy vibe that had won the crowd over to The Bad Flowers. Subsequently, it did take the crowd a little longer to warm to Nichols’ set but nevertheless, warm they did, and it was another appreciated performance. I was personally impressed by Nichols’ ability to play exactly the kind of blistering guitar solo his music demands while not using a plectrum. Not something you see every day and not something I’ll forget in a hurry.

With only a short changeover, Stone Broken took to the stage with an energy and enthusiasm that surpassed everything we had experienced so far that evening. They hit us hard with ‘Heartbeat Away’ and, prowling the stage like caged animals, took no time at all in encouraging and engaging the crowd. It was a great entrance that was, sadly, slightly hampered by the fact that only half of their lighting setup was working correctly for the first few songs; but that aside, there was no doubt that they were going to give us all they had.

The set opener, ‘Heartbeat Away’, was a natural choice as one of the strongest songs off the new album, and overall the set was evenly split between new material and old favourites with numbers such as ‘Just A Memory’, ‘I Believe’ and ‘Let Me See It All’ being showcased from Ain’t Always Easy. Fittingly, the set ended with a song from the new album, ‘Worth Fighting For’. I must admit, the symmetry of starting and ending the set with a song from the new record was, I thought, a very nice touch.

Aside from the new material, ‘Better’, ‘Be There’ and ‘Let Me Go’, amongst others, made the cut from the band’s original album All In Time, and it was good to see how well the new and old songs fitted together in a single set with the performance staying high octane throughout.

The band’s performance was, to me, the thing that let them down a little. It seemed as though they had one set of moves and they were repeating them, with guitarist Chris Davis and bassist Kieron Conroy doing a steady dance, swapping sides of the stage throughout every song. If I’m honest, I don’t know what I would have liked them to do differently but after a short time, it came across as quite forced posturing and lost a little of its effect for me. That being said, Conroy was regularly seen singing along even when stood on top of the monitors, so nobody could accuse them of “going through the motions” or anything so damning. I wonder if, being new to the limelight,  they’re still a bit “green” and not quite sure how to own a larger stage. I think it’ll come in time.

On the subject of being new to the larger stages, frontman Rich Moss made a heartfelt speech to the crowd asking who had seen them at their last London show at The Black Heart in Camden; and it was a thoughtful gesture with the best result as, from the cheer that went up, it was clear that a good few people had indeed been there and come to see them again.

Stone Broken are a band who are doing everything they can to be everything they can be, and the effort and energy shows. If they can keep that energy, I feel they have the potential to be great and, despite what could arguably be a few minor teething troubles, I for one am looking forward to being in the crowd at the next show, no doubt somewhere even bigger, and cheering when they ask who was at Islington Assembly in 2018.