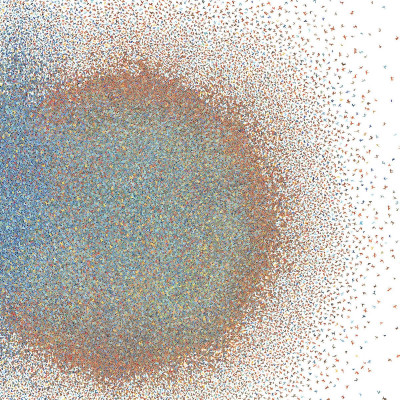 I was drawn to this record in the first instance by the involvement of Robert Aiki Aubrey Lowe,  creator of celestial drones as Lichens and contributor of fabulously ethereal eeeeeeps to mystical doom-mongers Om, amongst other weird and wonderful sonic activities. Then the cover art drew me in further, a calming diffusion of fluttering paper offcut points from a circular centre, angular rust spots or tiny cell-spores or vast atmospheric bodies. The album, Flower of Sulphur, is a collaboration between Lowe, YoshimiO of Boredoms fame, and experimental percussionist Susie Ibarra, consisting of four side-long pieces.

Hoping for a shimmering dreamlike dronescape, at first listen I was a little disappointed- there were some such elements, like achingly slow cymbal washes and some faint background hums, but these were interrupted by jerky yips and hiccups at irregular intervals, like a nervy, overcaffeinated scat singer brought along to a crystal-bowl meditation session. We get going a bit more once we’re halfway into the near-13-minute track, with the percussion getting up a bit more of ahead of steam, and there’s some wonderful electrick snaps and crackles of octarine coloured energy while (I think) Lowe mewls and drawls and yelps.

While some of the sounds are really wonderful, each long track combines aspects of the same sonic palette in similar ways. Staccato yelps, aimless drum spatterings, and some self-consciously experimental bips and boops– even when in each track they collectively build to some level of collaborative clatter, there doesn’t seem to be much energy to things.  As the press release has it, ‘The album takes the form of the trio each playing their principal instruments with no specific goal other than the exploration of the space in that moment.’ While presence at the live event where this was recorded may have allowed attendees to participate in that exploration of space in the moment, unfortunately here the ‘no specific goal’ is what shines through. 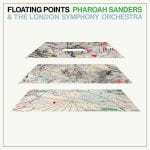