(((O))) Interview: Here, There and Everywhere – Interview with Patrick Grant 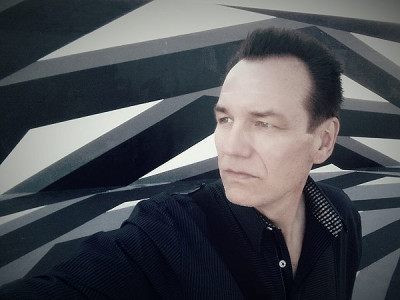 "Only classical compositions and that kind of inter-related album architecture could pull together elements of rock, world, and techno into a cohesive whole that goes beyond mere pastiche and that is integrated into its core."

If you are under the impression that Patrick Grant’s name doesn’t sound too familiar, you are probably wrong, as certainly I was that he had only two (most recent albums. Grant was and still is all over the musical scale, having played or having musical associations with the list of names that range from Robert Fripp and John Cage on one end of the spectrum to Billy Joel and Quincy Jones on the other. Echoes & Dust spoke to Grant about the multitude of his musical projects and ideas.

(((o))): During your career you have been linked with such names as Robert Fripp, John Cage on one side of the musical spectrum and Billy Joel and Quincy Jones on the other, how much did any of these names influence your music?

Any connection that I have with Robert or John was completely intentional on my part while Billy and Quincy just happened to be mentors of a project that I was hired for. Each of these men is such strong artistic voice that it is impossible for anyone to not be affected by them in some way when working in their proximity. Hardly a day goes by where I do not think of one of them and something I learned from them that ends up in my current work.

(((o))): Judging by the music presented on the two albums under your name you possess a vast knowledge of both classical music and jazz, who would you cite as your greatest influences in that respect?

There are many more than two albums. I have been releasing commercial recordings since 1998. You can find them in the usual places online if you look. I would not say that my jazz knowledge is vast, but what I do know, I learned from great musicians like Hal McKusick (RIP). My knowledge leans toward classical and pop music. In that respect, I would cite Bach, the Beatles, and Bartok. In retrospect, they were the main ones. My piano teacher had me playing the latter’s Mikrokosmos from an early age. I am so grateful to get that music into my mind and body when I was young.

(((o))): Your works were played by Bang on a Can collective, primarily known for its performances of Terry Riley’s music, and you did record at Phillip Glass’ studios. How much are you involved with minimalism as a genre?

When I was 14, a dear friend bought my Steve Reich’s “Music for 18 Musicians” for my birthday. I was heavily into classical and pop at the time. This music was the bridge even though I did not care for it at first. This was because I did not know how to listen to it correctly at first. It changed the way I listened. Surface activity was sacrificed for the sake of depth, a harmonic movement was slowed down to let every small development become thunderous in scope. I was born in Detroit so I like a good groove. This music was the bridge and my gateway into non-Western music. Yes, I recorded my first album at Philip Glass’s studio in the late 90s. It was a mixture of classical instrumentation and Balinese gamelan. Nowadays, my gamelan studies have manifested in my work with large guitar ensembles and my own electric project, Tilted Axes.

(((o))): The scope of the music seems to span World and Folk too, you were covered by gamelan musicians and your covers of the sea shanty “Seven Years at Sea” and Bossa Nova classic “One Note Samba” on your latest album “A Sequence of Waves” are personal favorites. Would you be so kind to expand on that aspect of your music?

Well, there you go like I was just saying. Perhaps because I had done so much touring in different countries as a theater composer, I’m always looking for commonality between seemingly different musical approaches. I like to be one of the forces that find points of connectivity, a musical Grand Unifying Theory. This isn’t a means to make superficial connections, but as a place of beginning, an approach to notice, and listen to, as much as possible. Our time might be short, but we can add depth.

(((o))): You are proficient at quite a few instruments, but the guitar seems to be the most prominent one?

Surprisingly, I am probably currently more known now as a guitarist than as a keyboard player. Piano, viola, and violin are my beginning instruments. I always played guitar in bands when I was growing up, but focused more on piano and synthesizers when I moved to NYC. I would say that keyboard and guitar are equal, but I still perform on percussion, gamelan, and other instruments as needed.

(((o))): You worked on or initiated quite a number of interesting projects like the International Strange Music Day, theater productions of Robert Wilson and musicians installations for the Louvre museum in Paris, could you be so kind to expand on some of those?

That would be my theatrical side and something I always had but that truly developed when I was creating theater music for Judith Malina of the Living Theatre. Did you know that contemporary composers like John Cage and Lou Harrison gave their first concerts through the Living Theatre way, way back when? That was one of the things that drew me into that work. It was my true connection to the New York avant-garde and runs deep in my lineage and formation. When I became creatively independent, it was only natural to create works that involved some form of ritual, ceremony, and sheer spectacle and to work with other visionaries like Bob Wilson.

(((o))): What was it like to break the Guinness World Record with your performance of 175 electronic keyboards?

Oh, that was just fun really. I was a co-producer on the project but I did not conceive it. That honor goes to a longtime friend and composer collaborator Jed Distler. It was a lot of work and planning, I’m not sure if it even sounded all that good, but the fine folks of Guinness were on hand to verify it and our presenter Make Music New York took the plaque that was issued. In the end, all of those keyboards, given to us by Yamaha, were given to local children’s music programs. That act alone made it worth the effort. The community is always a big factor in the larger productions I have created or have co-produced.

(((o))): How are the plans with variations on the Strawberry Fields Forever theme going?

The hardest part was getting the permission from Sony/ATV. That’s who Michael Jackson sold the rights to after he had them for a while. This was after he had famously outbid Paul McCartney for the Northern Songs catalog. Anyway, it took me a lot of writing and phone calls to convince them. Sony/ATV is very protective and knows for “not playing nice.” I proposed a set of variations for a 16-piece ensemble that exactly mirrored the instruments used on the 1967 recording. I was told that, no matter how much original material of my own that I created, that to refer to it as a Strawberry Anything, that is would only be considered an arrangement and all publishing money would go to Sony/ATV. It would be a money-less act of love if I were to do it. My intention was to have something ready for the 50th anniversary of it and Sgt. Pepper in 2017, but there were so many people doing similar things, any artistic worth it may have had would have been heavily diluted. I put it on hold. I was having more fun creating my own music than putting so much energy into that kind of nostalgia. I still retain the rights. It seems that the real achievement was getting that. Still, I’m sure that there will be a piece based on it someday, but there’s no rush right now.

(((o))): What are you currently working on, and what are the plans for the next album?

I am happy that “A Sequence of Waves” has been nominated for Outstanding Classical Recording by my hometown’s Detroit Music Awards. Why “classical?” I get it. Only classical compositions and that kind of inter-related album architecture could pull together elements of rock, world, and techno into a cohesive whole that goes beyond mere pastiche and that is integrated into its core. Like DNA. I mean, look at the recent Pulitzer Prize. This is the world we live in, this is the 21st century. It will be interesting to see what happens at the awards ceremony. Still, I’m happy even with this recognition.

In the last few years, I feel like I’ve come upon a work method that works well for me and my musician-collaborators. Maybe you thought that I only had two albums released because these last two have done well. I have found an audience. We are working on the next album now. Maybe it’s two, I am not sure. There is a lot of recorded material in need of editing and mixing. I will say that the next one feels like editing a big film like Apocalypse Now or The English Patient. I recently began a position as a professor at the NYU Film School so I am drawing as much inspiration from that kind of production and putting it into my music. I’m not sure if it will work, I never am when I’m putting something new together, but it’s exciting and keeps me interested.

There is also demand that I return to live performance again. I’m dying to do that. That was put on hold so I could adjust to a post-Obama reality and learn a few new skills as a professor. Now, I am ready to rock again. Plans for that are in the making. Keep an eye out on the social media and on my website. I’m sure that news and a striking graphic are not far away.