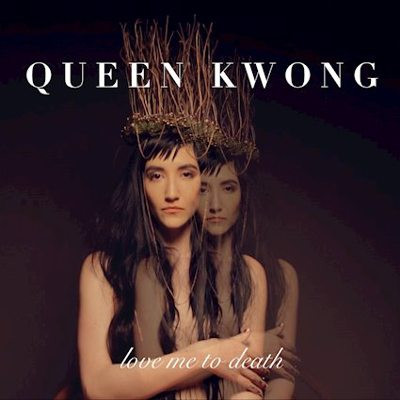 Love Me To Death by Queen Kwong

Queen Kwong is Carré Callaway, an LA based musician who deals in direct terms. Growing up next to her father’s Denver punk club, and impressing Trent Reznor in her teens with a raw live performance, she is someone who seems personably close to the primordial vein of punk rock. Her debut Get A Witness was taken unrefined from the earth and is a raw unmolded statement that, for better and for worse, is an untamed beast – recorded in just two takes. If Get A Witness is that jagged rock laid bare, her new effort Love Me To Death has been picked at and refined to get to the root of her powers.

You can feel throughout that Queen Kwong isn’t interested in wasting time. Songs are butchered and cut until only the heart remains, the hooks are given all of the room in the world to amplify and dig in – whilst experimental synths and psych guitars scream out before being brutally silenced. Singles ‘Love Me to Death’ and ‘One Lung’ exude strains of the Stooges‘ and Siouxie Sioux but presented with an unwilling tameness, as if Raw Power was forced to put on a dinner jacket and play nice. Elsewhere Callaway is a swaggering post-punk prophet alone on a 70s highway, leading you into a hallucinogenic blues bar at the petrol station to oblivion. Take final track ‘Sun of Life’, fittingly after the bare reflection of ‘Old Faithful’, where you are taken by the hand in a spiralling religious ode to the end of the world as it collapses into an LSD induced black hole.

Something that has survived the brutalist streamlining of Callaway’s songwriting is her vocal honesty, placed within a strangely cyclical conduit of catchy choruses and meandering verses which seem to lead somewhere other. Lyrics are a strange thrashing hybrid between vicious catharsis and a melancholic appraisal. Carré Calloway has a natural charisma to her that draws you in, and this is the best interpretation of her ferocious live shows on record yet. It feels wrong to draw comparisons with Callaway’s inspirations and connections when the music seems so deeply rooted in the creator – where her music is a creation of nature rather than nurture.

For all its jagged edges and melancholic dejection, there is an air of familiarity that makes Queen Kwong a strangely comfortable place to be. An uncanny feeling that you are home in a house you’ve never visited before, and like the dust covered roads in Oliver Stone’s Natural Born Killers all directions encircling you seem to lead somewhere violently base. Callaway has surpassed her debut with merciless purpose and precision whilst in turn producing one of the most refined and primeval releases of the year.